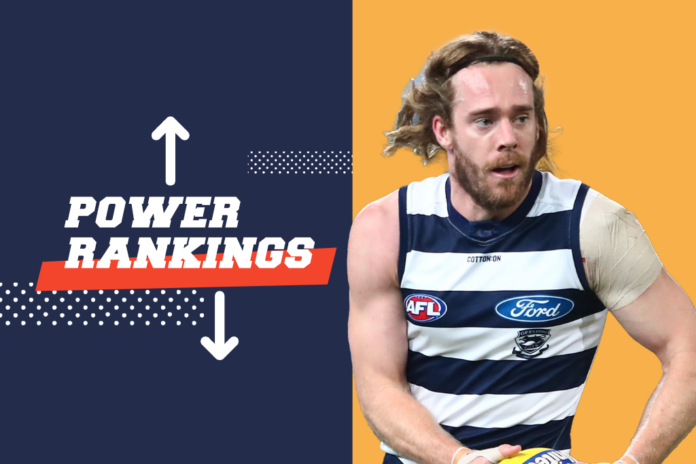 Melbourne have held onto top spot of the Power Rankings at the conclusion of Round 16, while Geelong's massive win has made things interesting in the top four.

The Saints seem to be back on track, lifting them up the table, while some finals prospects were delivered big blows and lost their spots.

Despite all teams in the top four of the rankings having a win in Round 16, the Demons did plenty to hold onto top spot. A 29-point win over Adelaide, plus dominant performances from stars Christian Petracca and Clayton Oliver showed why Melbourne are the premiership favourites. A big test of the credentials comes in Round 17 against Geelong at GMHBA Stadium.

A 112-point demolition of the Kangaroos is worth a rise to second spot on the table, with the absolute clinical performance doing plenty to solidify the Cats' top four credentials heading towards the conclusion of the home and away season.

Geelong made light work of their opponents this week, with Tom Hawkins (6 goals) and Jeremy Cameron (4 goals) doing plenty in the forward line, while Mitch Duncan did plenty in his milestone match.

It's tough luck to lose a spot off the back of a win, but the Dockers had to concede their top two position to the rampaging Cats. An eight-point win over the Power has still kept Fremantle in the top four and perfectly primed for the last third of the season.

The Lions looked impressive on Thursday night, putting their foot down after half-time to secure a strong, 41-point win over the Bulldogs. Charlie Cameron starred up forward with four goals, while young Keidean Coleman played an important, and impressive, role across half back.

The Lions were left with some injury concerns after the win though, which will be a test heading into what should be a very winnable match over Essendon at the Gabba in Round 17.

The Tigers managed 20 goals in their 35-point win over the Eagles, doing enough to keep their fifth spot on the table. The win was hampered by an apparent hamstring injury to superstar Dustin Martin, who was taken off the field due to "hamstring awareness". With a match against Gold Coast away from home looming next, the Tigers will be hoping their star is ready to go.

Despite a disappointing loss on Friday night, the Blues have shown enough over the past month to hold onto sixth spot. The 15-point loss to St Kilda, in what was a very winnable match, was a big blow for the Blues who now face West Coast, Geelong and GWS in the coming weeks.

Inaccurate footy is bad footy, and if Carlton kick 10.18 again like they did on Friday night, they could find themselves dropping down the rankings.

The Magpies are one of the in-form teams of the competition at the moment, having won six straight games. With their latest victory, a narrow five-point win over Gold Coast, the Pies are continuing their ascent up the rankings.

Collingwood are now facing a period of time without Darcy Moore after a knee injury, but with games against North Melbourne, Adelaide and Essendon to come, it seems more likely than not that this winning streak will be extended and the Pies will feature high on the rankings in the weeks to come.

After humiliating the Bombers on their last meeting this season, the Swans were on the receiving end this time. While the upset win to the Bombers was no blowout, the consequences on Sydney's finals campaign is enough to see them drop a spot.

Kicking eight straight behinds in the third term was poor footy from the Swans, who are relegated to eighth position on the table after coming so close to proving themselves as a genuine premiership threat.

After an impressive Round 15 performance, Thursday night against the Lions left much to be desired from the Bulldogs. The 41-point loss to a premiership threat seemed to signify where the Bulldogs are at the moment, the middle of the table.

St Kilda redeemed themselves ever so slightly with their gutsy win over Carlton on Friday night. Coming off the back of three straight losses after the bye and under increasing pressure as a finals spot began slipping from their grasp, the Saints came out firing against the Blues.

Despite injury concerns leaving them a few men down in the latter stages of the final term, the Saints managed to run out victorious and earn a little bit of faith back.

Gold Coast's five-point loss to Collingwood would have been a tough pill to swallow for Suns fans, with the defeat essentially removing them from the finals conversation. The Suns had a 14-point lead in the final term but failed to overcome the Pies' momentum, a disappointing way to end what has been an unlikely, but exciting, finals prospect.

The Power came ever so close to winning in this thriller, eventually going down to the Dockers by eight points. While Port's performance should be credited, especially a run of four unanswered goals to get the game back on their terms, it was still a winnable game that they let slip through their fingers.

The Giants Round 16 performance was very much the same as the rest of the season. A 22-point win over Hawthorn was valuable points in the bag, but an expected win. The Giants have shown plenty of improvement under interim coach Mark McVeigh, but not enough for them to be classified as anything other than a bottom half of the table kind of team.

Hawthorn's 22-point loss to GWS was the side's fifth consecutive defeat as they struggle to put together any consistent patches of form. There were times on Sunday afternoon where the Hawks looked in with a shot at securing the four points, but consistency and conversion were their worst enemy.

The Bombers have continued their up and down season with a win over Sydney in Round 16. After a dominant Friday night performance over St Kilda, then a disappointing loss to the Eagles, it's hard to know which Bombers side is going to show up. This weekend, the Bombers worked hard to come back from a 26-point deficit, earning themselves a slight promotion on the Power Rankings table.

A Saturday afternoon match against the reigning premiers never seemed like it would end well for the Crows, who eventually lost to the tune of 29 points, but they did plenty to show that they aren't easy beats.

The Crows came within five points of the Demons in the final term, but couldn't do enough to secure an upset win.

The Eagles' second half of the season resurgence hit a slight roadblock facing the Tigers in Round 16, but the 17th placed side has shown plenty of improvement.

A 35-point loss can't be celebrated, but as West Coast get key players back and lift themselves from the bottom of the table, there seems to be signs of life from the West who may find themselves in a much better position come seasons end.

After a dismal effort against the Cats on Saturday night, it's a shame the Kangaroos can't drop any lower on the rankings. The 112-point loss, the biggest in the season so far, has all but confirmed that North Melbourne will be lingering in 18th spot for the remainder of the season, with little signs of improvement seeming to come from the club at the moment.