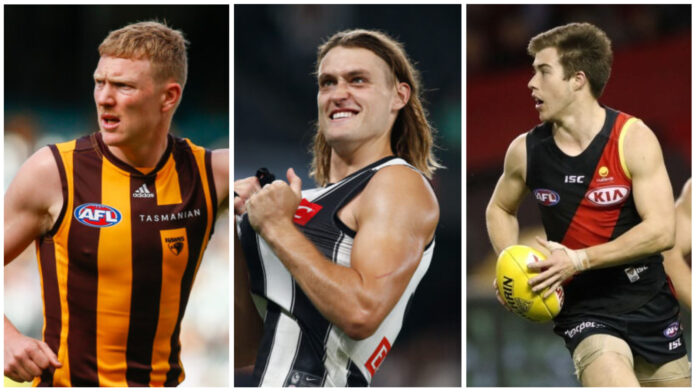 Collingwood defender Darcy Moore has played a straight bat when fronting questions surrounding the vacant captaincy at the Magpies, while a number of other stars across the AFL are beginning to emerge as front-runners for the top jobs at their respective clubs.

As it stands, Collingwood are among three clubs still needing to announce new captains ahead of the 2023 season after veteran midfielder Scott Pendlebury announced his decision to relinquish his role after a club-record 206 games leading the Magpies.

Geelong and Hawthorn will also move through the process of selecting a new captain after the retirements of Joel Selwood and Ben McEvoy respectively.

For the Magpies, Moore is among a handful of key players seen to be in the running to succeed Pendlebury, with the likes of Jack Crisp, Jeremy Howe, Brayden Maynard and Taylor Adams also a strong chance for the role.

Speaking to media on Monday, Moore was coy on his candidacy, but backed a particular group of teammates to have the needed "experience and traits" for the job.

"It is obviously something that's been spoken about and we're as excited as anyone about what the future holds for the leadership of the team," Moore said.

"This is obviously a pretty special team; we achieved some great things last year and showed a lot of character. That shows that the group is really healthy, whoever leads from the front.

"I think there definitely is a group of us that have the experience and traits that are definitely capable of doing it. It's not something I've given a lot of thought to. Dad was obviously a past captain of the club."

Collingwood players are expected to vote on their next captain in the coming days.

While a leading name is yet to emerge at the Magpies, the Cats and Hawks are said to have clearer options for their new captains as both clubs weigh up selecting new skippers.

Following Selwood's decision to retire after lifting the premiership trophy last year, his 2022 vice-captains in Tom Stewart and Patrick Dangerfield are both seen as strong chances to replace the departed club champion.

All-Australian Mark Blicavs may also be considered, however Stewart is seen as the front-runner for the Kardinia Park crown.

"I'd have Tom Stewart as the favourite there," reporter Mitch Cleary told SEN this week.

"There has been a bit of a push for Mark Blicavs. Then (there's) Patrick Dangerfield. In terms of the off-field and commercial aspect, (there's) so much more than just an on-field cap[tain that goes into it.

"I think he has to be in consideration as well.

"I think that'd be the podium right now, but Tom Stewart has been the heir apparent for Joel Selwood for the best part of 12 months now."

Later reports from 7 News reporter Tom Browne have suggested that Dangerfield is seen as the favourite for the top job despite turning 33 in April.

High-flying defender James Sicily is touted as the obvious candidate to replace the retired McEvoy at Hawthorn, with senior coach Sam Mitchell seen likely to run with just the sole skipper amid a time of change for the Waverley club.

Cleary stated a number of emerging Hawks are expected to take on leading roles this year, with Sicily to be their main man.

"Sicily is the out-and-out favourite at Hawthorn," Cleary said.

"He's the one you can almost pencil in right now. I can't see too many others outside of him taking it.

"There's been a bit of chatter around the next wave of guys like Dylan Moore and Jarman Impey taking on more leadership, but if the Hawks are going solo, which you think they would under Sam Mitchell, I think James Sicily is the guy."

While some clubs don't have openings for their captaincy ahead of the 2023 season, several sides will still be weighing up potential changes to the top of their leadership groups for the year ahead.

Both Fremantle and Brisbane could opt for a changing of the guard for captains Nat Fyfe and Dayne Zorko respectively.

The Dockers have confirmed they'll monitor Fyfe's pre-season before making a call, while Zorko has previously put his hand up to lead the Lions for a sixth straight year.

According to Cleary, "neither are certainties" to retain their roles, with Fremantle star Andrew Brayshaw and Lions defender Harris Andrews both likely in the running should their skippers step aside.

Essendon are another club that could see a change to their captaincy, with veteran Dyson Heppell potentially handing over the duties after six seasons.

News Corp have reported that Zach Merrett looks to be the Bombers' leading man across pre-season so far, with the midfielder another star tipped to lead the race should a vacancy open up.

Merrett was a key figure in Essendon's strong second half to last year, while Heppell's place in Brad Scott's best 23 is no certainty.