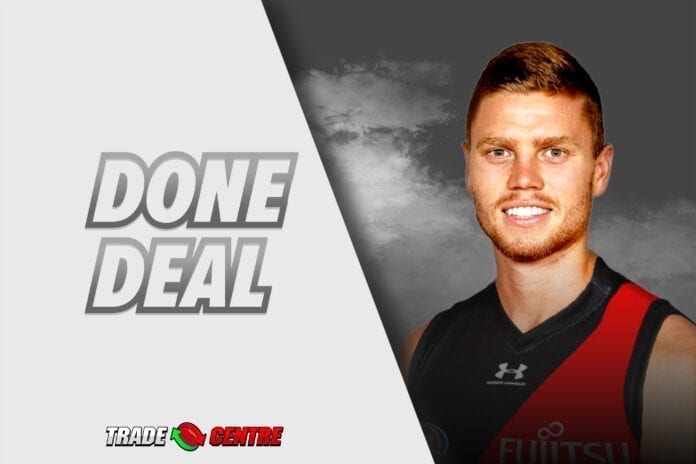 The Bombers have seemingly found their replacement up forward for Joe Daniher.

The Gold Coast Suns have sent Peter Wright to Essendon for a future fourth-round pick.

Wright, 24, still has two years to run on his deal on a salary worth around $500,000 per season, while reports say Essendon have added an extra year to his contract which would tie him to the club until the end of 2023.

The Gold Coast SUNS have traded Peter Wright to Essendon for its Future Round Four Selection.

The Suns have reportedly agreed to pay a significant portion of his salary at the Bombers.

“We’re pleased to have recruited Peter from Gold Coast and have him join the club until at least the end of 2023,” he told the club website.

“Given Peter’s strong marking and goalkicking ability, we think this is a quality acquisition for our forward line and ruck division. At 24, he’s in a key age profile for our list and should be entering the peak of his career, so it’s a real win for us to bring in someone who we know can be an asset to our playing group.

“Peter is originally a local boy, hailing from Moonee Ponds, and it’s a nice homecoming for him after six seasons with the Gold Coast Suns. We’re excited to see Peter become an important player for our side in years to come.”

Wright has played 66 AFL games for the Suns after making his debut in the 2015 season, booting 85 goals over that period.

However, he did not make any senior appearances in 2020 following the breakout of Ben King.

Wright was drafted to Gold Coast with Pick 8 in the 2014 AFL Draft.