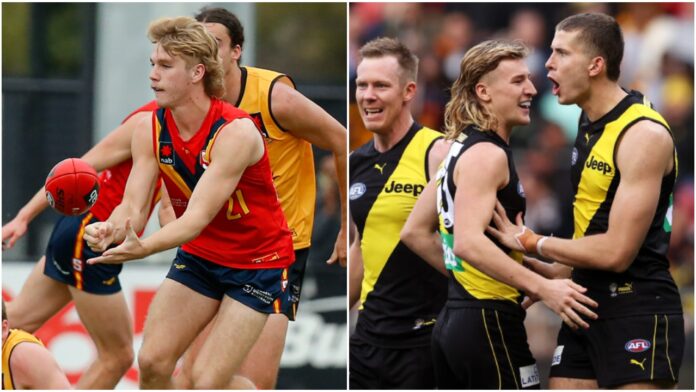 North Melbourne list manager Glenn Luff has stated it will take a "pretty attractive" offer for the Kangaroos to part ways with Pick 1 this trade period.

The Roos are poised to take South Australian prospect Jason Horne-Francis should they retain their top selection come the National Draft in November.

Luff revealed on Trade Radio that North Melbourne are open to any contact made by keen suitors for the top pick, however a mammoth package would need to be placed on the table for a deal to be considered.

"It's a pretty valuable pick one this year, more valuable than any other year," Luff said.

"We'd be silly not to take calls and hear what's being put to us. There's been a few nibbles."

"It's pretty clear it'd have to be a pretty attractive deal to hand over Pick 1."

The Kangaroos will utilise Pick 1 and the upcoming trade window to aid their list rebuild, with wantaway Tiger Callum Coleman-Jones opting to move to Arden Street ahead of the 2022 season.

Luff said talks with Richmond have begun, with an exchange possibly involving free agent Robbie Tarrant, who has nominated Punt Road as his preferred destination.

"We've had some early discussions with the Tigers, we'll put something to them early in the trade period," Luff said.

"There's plenty of history with ruck-forwards at that age and what they go for. Obviously what happens with Robbie Tarrant will affect that.

"We're pretty comfortable something should get done."

The Tigers may be keen to involve Tarrant in their trade discussions with the Kangaroos instead of luring the defender via free agency, as they hope to retain any compensation they receive after losing free agent Mabior Chol to the Suns.

The Kangaroos are also set to acquire delisted Crow Tom Lynch in a coaching capacity this off-season.