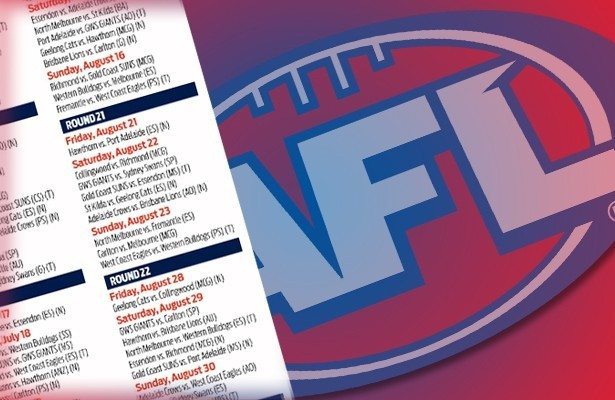 In season 2015, the AFL went for a “fans first” philosophy; they lowered the prices of entry into games around the country, food and drink at the concession stands was cheaper, and the clubs did everything they could in the pre-game, half-time and post-game entertainment.

I mean, who can forget the Carlton hovercraft or the Lions bold suggestion at the start of 2015 to have an actual real-life Lion at their games, but instead settling for a lion tunnel for the players to run through?

But in 2016, the AFL is focusing in on the fixture, and with the announcement that there will be two byes over the 23 round home and away season, it means a lot of blockbuster games will have to be fit in to not as many rounds.

1. Your Love Is A Dangerfield

One of the most high-profile free agents during it’s time so far, Patrick Dangerfield made his way to Geelong during the trade period. It’ll be interesting to see what kind of reaction “Danger” gets as he trundles his way back to his old stomping ground in Adelaide to take on the Crows for the first time since heading to the Cats.

2. The Battle of Carlisle

One of the most interesting stories during the trade period was Jake Carlisle leaving the Bombers and heading to Moorabbin to play with the likes of Nick Reiwoldt, Leigh Montanga and… uh… the other guys over there, only to get busted for doing drugs just hours after the paperwork went through.

Who knows? This game might not even take place should WADA have their way.

3. He Might Not Be So Happy After This One…

He’s known as the happiest man in football, but new Carlton coach Brendan Bolton could possibly have that smile turned upside down when his new side meets his former club in 3-peat champs Hawthorn, as they look to inevitably make a tilt for a fourth straight premiership. But hey, stranger things have happened…

After deciding he was burnt out following the Eagles worst season in the club’s history, legendary Weagle John Worsfold decided to hang up the whiteboard. But the passing of good mate Phil Walsh saw Worsfold return to the fold as interim footy manager at Adelaide in the second half of last year.

Now that he is leading the Dons, it’ll be interesting to see how the West Coast fans treat him when he comes back to Perth for the first time as a senior coach.

5. Howe will he go against them?

High flyer Jeremy Howe should pretty much have the Mark of the Year for 2016 sewn up by now, so it’ll be interesting to see how he performs against his former team Melbourne in the traditional Queen’s Birthday match.

The last few have (obivously) gone to Collingwood, but maybe Melbourne next season could be a real smokey…

It was one of the strangest trades of this year: 4 picks, 4 players. Jed Lamb, Andrew Phillips, Lachie Plowman and Liam Sumner could all play against their old club for the first time. So how will the GWS Giants go against the Carlton Giants? Time will soon tell…

7. Please Tassie, I’m sorry about what I said

The sport of AFL and the isle of Tasmania have a long history together. So when the AFL said earlier this year that there probably won’t be a Tassie team in the national competition for a while, it seemed like the relationship might be heading for the garbage.

In a desperate move to try and reconcile, the AFL have extended the red rose in the form of a Friday night game between the Kangas and Richmond. Balls in your court to reciprocate now, Tasmania.

8. “Wait, the Bulldogs are playing on Friday night?”

The Western Bulldogs are perennial Sunday twilight fixtures. But this off-season, President Peter Gordon lobbied the AFL to get at least 6 games on Friday night after their superb season making it to the finals.

They managed to get three, with the first against North Melbourne in Round 6. Let’s just hope the Dogs are up to the bright lights of friday nights.

9. Just the one game this year, please…

Did anybody else have a bit of football overload this ANZAC Day when there was six games played across two different countries. I mean we love football, but ain’t that a bit to much?

Given the fact the NZ experiment was bust and ANZAC Day falls on a Monday this year, it’ll be nice to see the two old foes battle it out alone on one of the most solemn days of the year.

Everyone hates how long we usually have to wait to see the Grand Final rematch. Not this year. The Hawks and the Eagles takes place in round 2 at the MCG on a Sunday afternoon.

Same clubs, same venue, same result? The Eagles will be hoping not.