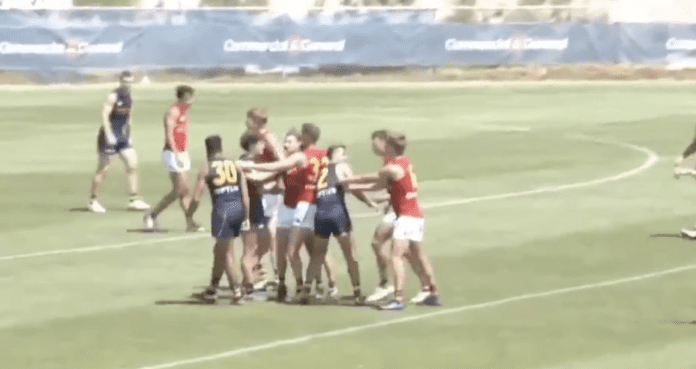 Footage has emerged of Adelaide duo Wayne Milera and Jake Kelly involved in a tussle during a pre-season hit-out, with the incident the second of its kind in 12 months at West Lakes.

The video shows the pair competing at the contest of an intra-club clash where Kelly is dispossessed by Milera before the latter looks to kick Kelly’s shin, tripping him over.

Kelly is seen to be immediately provoked into a tussle, which soon sees several teammates look to break up the altercation.

The incident comes a year after Billy Frampton and Kyle Hartigan were involved in a similar incident ahead of the Crows’ 2020 campaign, with the pair throwing punches before being restrained by teammates.

EXCLUSIVE | 10 News First cameras have captured a brawl between Crows Billy Frampton and Kyle Hartigan during a scratch match at training over the weekend. More details at 5. pic.twitter.com/8xKI6R379K

Hartigan has since left Adelaide, moving to Hawthorn at the end of last season after eight years at the Crows.

The latest incident is another distracting headline for Adelaide, who have endured a horror past year that has included off-field drama while also winning just the three games last season.

The Crows will begin their 2021 AFL season against Geelong on Saturday, March 20 at Adelaide Oval.

Nathan Buckley prepared to step away as Collingwood coach