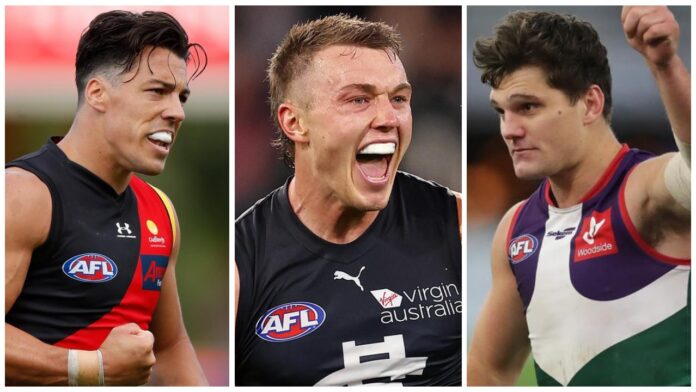 There's three games to go before the end of the regular season, and it’s still not certain who will be making up the numbers for this year’s finals series.

Seven clubs now form a gridlock of sides fighting it out for the last two places that are up for grabs at the bottom of the eight.

West Coast and Fremantle currently occupy the remaining elimination finals positions. However, debates over their credentials have been raging for some time, especially with a chasing pack of GWS, Essendon, Richmond, Carlton, and St Kilda ready to pounce on any slip-ups they make over the next three weeks.

GWS and Essendon are the two other sides most likely to make a charge on the remaining two elimination finals positions, but let’s not write off what has been a quite surreal resurrection from Carlton, who have one of the more favourable run-ins of the seven sides in contention.

It’s the tightest we’ve seen the league in a very long time. Even looking at the top of the table, things can still change dramatically, with fifth-placed Sydney able to launch an attack on a top-two spot if they can go three-from-three for the remainder of the season.

But as the blockage at the bottom tightens up moving into Round 21, AFL Media correspondent Damian Barrett has raised questions over whether these seven teams should even be playing finals football.

“I’ve got an idea, and to execute this idea, we’ve got to go back to 1993; that was the last time the AFL had a final six,” he told Nat Edwards on the AFL Daily Podcast last week.

“To me, there are only six teams worthy of finals action in 2021.

“I’m sorry, West Coast, I’m sorry, Fremantle, as it stands, you’re out. It stops at the Brisbane Lions, who are currently sitting sixth on the ladder.

“Eight teams making a finals system out of 18, it’s too many to me anyway Nat, and I think this is proof,” he said, reflecting on some of the worrying form-lines of teams on the cusp of securing a position in the 2021 Finals Series.

“Staggeringly, we have criticised, and not just us, every single other person in history has criticised these teams vying for this eighth spot.

“Fremantle’s got it after round 21, while GWS, Essendon, Richmond, Carlton, and believe it or not, even St Kilda are only one game out of the eight with three games to go. Clearly, Nat, they do not deserve what may fall their way.”

Edwards concurred, stating: “I think we can definitely say whoever makes those spots in seventh and eighth will be just making up those last spots.”

Of those teams, West Coast are the one side whose finals credentials are perhaps in the most doubt, considering their recent run of form and humiliating loss to 16th-placed Collingwood on Saturday.

But it’s not quite DEFCON 1 for Adam Simpson’s side yet.

A four-point buffer keeps the Western Australian powerhouse safe from the advancing pack of teams just outside of the eight. Although a loss this weekend to Melbourne could sound the alarms on the Eagles’ season, considering their recent form away from home, they need to start playing if they are to hold onto seventh place.

Their loss to Collingwood on Saturday is a culmination of a series of disappointing losses for the Eagles this season, including a 92-point loss to Sydney, a 97-point loss to Geelong, and a terrible round 17 loss bottom-side North Melbourne.

Put simply; I think the West Coast will limp over the line this year, with just one more win perhaps being enough to hold down a space in the eight.

But if they do get to finals, what can they produce?

The Eagles record against the top six isn’t pretty, but when the cogs link up, they are one of the most dangerous sides in the league; what’s letting them down is their ability to win the ball and provide service into their devastating tall-forward line.

The good news is that if the West Coast can hold onto seventh place, they will likely playoff against an out of form Brisbane side in their first elimination final. Without looking too far ahead, they have perhaps the toughest run-in of all the teams vying for a place in finals, with Melbourne (H), Fremantle (A) and Brisbane (A) coming up in the next three weeks.

Fremantle will certainly see their next two matches against Brisbane this Sunday and an 'eight-point game' against West Coast in Round 22 as two huge opportunities to climb the ladder, and I’m optimistic the Dockers can hold on this year.

Justin Longmuir’s side were given a ray of hope last weekend as the Eagles failed to put more distance between 7th and 8th place and now have a shot of drawing level with their rivals this weekend, thanks to a heroic win against Richmond last Sunday.

A visual guide on how to trim your nails 😅 #foreverfreo pic.twitter.com/99sIVERAVJ

The odds weigh in the Dockers favour coming into round 21 as they take on a slumping Brisbane side, who will be without their star midfielder Lachie Neale (illness).

But like the Lions, Freo will be without several attacking players over the next few weeks, including captain Nat Fyfe (shoulder), forward Rory Lobb (ankle) and 2019 All-Australian Michael Walters (hamstring).

Whether they’ll be able to compete in finals without these players is another issue, having only gone 1-6 against the top seven this season. Although the more pressing issue for Fremantle is holding off the chasing pack of clubs hot on their heels, and the first of those is the Giants.

Leon Cameron’s side still has a lot to do to break into the top eight, and considering their next three games; it’s going to be a tall order.

They’ll first travel to Kardinia Park this weekend to take on a 5-0 Geelong side who are putting forward a serious case to become this year’s league leaders. Next, they’ll play-off in what could be an eight-point swing match against an out of form Richmond side, while lastly squaring off against a resurgent Carlton side, making a last-minute play for the eight.

I like GWS’ chances of taking on the top six when it comes to playing finals footy. The Giants are a physical side and can out-muscle and tactically out-think some of the best sides in the league on their day.

The thing they can improve on is their efficiency inside 50. The Giants squandered several chances at the weekend against Port Adelaide, which, if they had converted, could have changed the result and could have stopped them from falling out of the eight.

The Tigers are another one of the seven clubs to have had a tumultuous year, but if there’s one thing we know about Richmond, it’s that you can never write them off when it comes to playing in finals.

When playing with their backs to the wall, Richmond can be a very dangerous side; just look at how they came back in the 2020 Grand Final.

With games to come against bottom sides North Melbourne (H) and Hawthorn (H), I wouldn’t be surprised if Damien Hardwick’s side snuck their way into the eight come to the end of the year.

The big issue that will set Richmond back is their mounting injury list stacked with key players. Each of Dustin Martin (kidney), Noah Balta (ankle), Bachar Houli (ankle), Nathan Broad (ankle), and Ivan Soldo (knee) have either been ruled out or are doubts for the remainder of the season.

The Tigers could struggle to play their best footy without them, especially if they secure an elimination finals position this year.

Dark horses Carlton are the team we should be keeping an eye on. Despite their mid-season slump, the Blues have had a chaotic month, going 4-2 to keep their hopes of playing beyond the primary season alive.

That’s thanks mostly to Harry McKay’s red-hot boot. But they will have to topple a tough trio of clubs that includes Gold Coast (H), Port Adelaide (A) and GWS (H) to get there.

One good point that weighs in the Blues’s favour is their efficiency when they get the ball inside 50. Carlton has scored from 45.3% of their inside 50s this season, only second to the Bulldogs. Conversely, the thing that has let them down is their ability to defend, ranking last in the league for goals conceded from forward-half turnovers.

Sorry Carlton fans, it’s been an impressive few weeks, but the realist in me thinks that the Blues could struggle to make it past the first-round of finals should they qualify.

The Bombers will need to upset the odds against the Western Bulldogs this weekend but still have a chance of sliding their way into the eight if they can pick up wins against the Suns and Collingwood at the end of the season.

Essendon have been a joy to watch this year, and despite marginally falling short of the mark of a few matches earlier in the season - throwback to their seven-point loss to the Cats in round one and their tough seven-point loss to Sydney at the weekend.

Their recent form bodes against them, but with midfield trio Zach Merrett, Dyson Heppell, and Darcy Parish running through the corridor, the Bombers are still a classy outfit capable of turning momentum on any side.

Lastly comes St Kilda, and unfortunately for the Saints, they’re going to need to muster something pretty special to win their next three matches.

Had they defeated Carlton on Friday, St Kilda would have jumped into an elimination finals position, and we might have had a different story on our hands. But it seems David Teague’s side have put the nail in the coffin on the Saint’s season.

The Saints come into the weekend 0-3 for their last three games and will finish their year with perhaps the toughest run-in of any of the seven clubs, first-round against Sydney (H), Geelong (A), and Fremantle (H). They’re also likely to now be without veteran ruckman Paddy Ryder (achilles) for the remainder of the season, as well as wingman Jack Billings who sustained a hamstring injury against Carlton at the weekend.

The scramble at the bottom of the eight couldn’t be more alive, and considering the absurdity of the 2021 season, anything could happen come September.