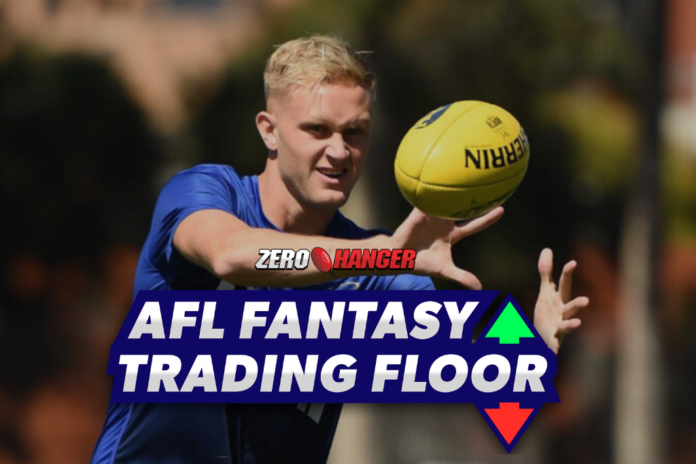 With the first Round of the marathon AFL season in the books, Fantasy coaches the globe over are either kicking back contentedly or simply kicking themselves after pulling the wrong levers.

Whether you are the king of your league after the opening nine games or you are up nights making alterations to your side, there is room for improvement for every coach.

Despite the collective urge to ring the changes, we have sifted through the rubble to make sure your opening alterations help rather than hinder.

Here are the names that every coach should be looking to bring in, move on and keep on your watchlist ahead of the season’s second week.

Talk about picking up where you left off!

After back-to-back seasons as an All-Australian, Jack Macrae once again announced himself as a must have Fantasy option, with 135 points in the Pup’s win over the Pies – the third highest Round 1 total.

With a 14k boost from his opening price, those that started the former Oakleigh Charger would have been licking their lips after an off-season where many coaches were wary of spending big on the Bulldog’s midfield premiums.

The 26-year-old currently has an ownership of 18% and enters Round 2 with a breakeven score of 110 – a score that Footywire gives him a 35% of meeting.

Although we have raised Macrae’s name, this could theoretically apply to any member of the Bulldog’s midfield group due to their dominance as a unit on Friday night.

If your engine room is missing Macrae, rectify this before it is too late.

Despite his acrimonious exit from the Holden Centre over the Summer, the former Rising Star winner looked to have reignited his 2018 form.

Stephenson spent 76% of Sunday afternoon on the ground and attended 10 of the Kangaroo’s centre bounces.

The former Pie finished his first game in blue and white stripes with 33 disposals and 128 Fantasy points – a score that could have been boosted had he converted better in front of goal than his tally of 0.2.

A career high in disposals for Jaidyn Stephenson against Port Adelaide 👏#AFLNorthPower pic.twitter.com/EoET04G6GQ

Unless you have been under a rock, you probably don’t require a through breakdown of Dustin Martin’s night out on Thursday.

The three-time Norm Smith medalist finished Round 1 with 31 disposals, 2.2 in-front of goal, 19 CBAs and 131 Fantasy points.

With his ability to run the game out at an elite standard and just 11% of the game spent on the pine, Martin looks like a must have in your forward line.

With a 75% chance of reaching his Round 2 breakeven of 80, if you haven’t shipped Dangerfield out for the rampaging Richmond champion, then jump on it.

VIEW EVERY PLAYER'S PRICE, BREAKEVEN AND SCORES FOR 2021 HERE

If you were one of the masses that ran with the ‘set and forget’ rucking combo of Max Gawn and Brodie Grundy, chances are you are still crying in your Tuesday morning coffee.

With a combined output of just 158 points, your tears are not without cause.

Although many will be tempted to move the manbunned Magpie on after just one game, he does remain the best value option to retain of the aforementioned pair.

Despite Grundy needing a score of 144 to breakeven after a fortnight, it is far more achievable than Gawn’s 170.

Don’t throw the baby out with the bath water just yet, but scratch your trigger finger if the troughing trend continues.

At the end of the day, Brodie Grundy has just one score of 100+ points in seven Round 1 matches across his career. No need to hit panic stations just yet. It's a long season. #SuperCoach #AFLPiesDogs

In a weekend that saw many premiums produce poor scores, Sydney’s Jake Lloyd was not immune.

Despite his Swans beating Brisbane by more than five goals, the mustachioed defender posted a sub-par 76.

Morning @FantasyFreako, when was the last last time that the most expensive options in each line all failed to ton up in SuperCoach?

Seen by many prior to the season as a name to retain throughout the year, if you have Lloyd locked in your back six, keep him there, as we all know what he is capable of.

The 27-year-old will need to post 152 points against Adelaide on Saturday afternoon, so you should still expect to take another hit.

After a 2020 season that saw him claim his first Brownlow medal, Lachie Neale entered 2021 as the second dearest name on the Fantasy platform.

Following a first up yield of just 68 points, the quarter of coaches that own the Lion will still be feeling the hit to both their Round 1 total and their hip pocket.

Like Grundy and Lloyd, if you started with the star midfielder, stick with him, as his ceiling is still sky high.

Expect another dip in price though, as it is highly unlikely that Neale will meet his breakeven of 170 against the Cats at Kardinia Park.

However, if you are keen to ship the Lion out to sea, then there are a plethora of ‘bang for your buck’ options available.

Although Patrick Dangerfield managed 96 points on Saturday afternoon – a near 15-point raise from his 2020 average – it is unlikely that the champion Cat will be available for selection for the better part of a month.

Following his collision with Adelaide defender Jake Kelly, the 2016 Brownlow medalist is expected to be rubbed out for at least two to three weeks.

AFL great David King has called for the AFL Tribunal to come down hard on Geelong star Patrick Dangerfield for his bump on Adelaide's Jake Kelly.

How many weeks do you think Danger should get? 🤔

Optimistic coaches may wish to wait for the verdict to be handed down, but after a trial by media since the incident, a snowflake would have a better chance in hades than Chris Scott naming his star midfielder for Friday night’s clash against the Lions.

Whether you go ‘like for like’ and add a DPP like Dustin Martin or you select a downgrade option, holding on to ‘Danger’ a track better left unbeaten.

With the depressing news that the former number one pick is set to be sidelined for an indefinite period with a PCL injury, Matt Rowell’s magnet must be moved off your whiteboard.

Who you replace the redheaded Sun with is a much more challenging decision.

Now priced under 550k after his price plummet, if you have the cash, an upgrade for fellow young guns Sam Walsh, Bailey Smith or Andrew McGrath may be on your mind.

Collectively, this quintet has a breakeven score of -68, a feat they will all achieve unless records are broken.

🙌 Hands up if you had Errol Gulden in your Round 1 #AFLFantasy or #Supercoach team?

If your 30-man squad is running without these cash cows, then keep them in mind as immediate downgrade targets.

At the other end of the scale, coaches that began the season with Charlie Lazzaro (10), Oliver Henry (15), Lloyd Meek (26) and Tanner Bruhn (29) will have their fingers crossed for an overall amelioration from their bargain basement picks.