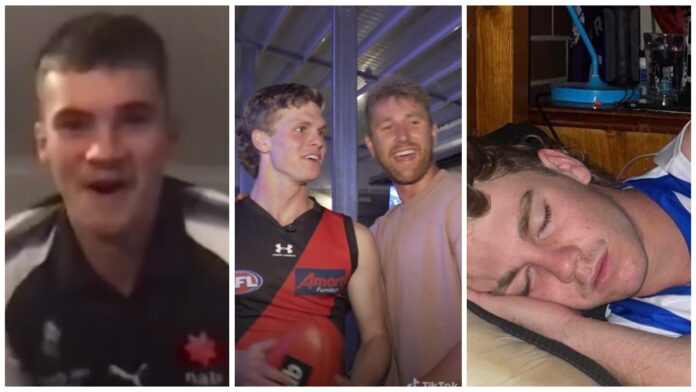 Draft Punk vs Horne in the SA

Callum Twomey and Riley Bevridge have certainly been creative in their draft content and took inspiration from French electronic music duo Daft Punk. The two sorted draft prospects into the category of 'Harder, better, faster, stronger' including Nick Daicos who was considered 'better' and Mac Andrew was picked as a 'Faster' player.

There is a lot of excitement for the 2021 draft countdown but nothing quite measures up to this lyrical master piece the AFL came up with heading into the draft week.

Like Born in the USA, Horne in the SA has become the AFL's smash-hit single!

Take a listen below!

Nothing ventured, nothing gained https://t.co/BXns5tsy1j

Jason Horne-Francis has taken out the prestigious honor of Australia's number one draft pick. But the news didn't exactly come easy to Horne-Francis and his family when the television screen he was watching from died whilst AFL CEO Gillon McLachlan announced North Melbourne's pick.

Horne-Francis told Fox Footy that the moment was "a bit weird." However the new Roo was passed a phone and watched the announcement on a live stream.

What a special moment for the new number one!

The moment Jason Horne-Francis was presented his new jumper by one of the all-time greats, Malcolm Blight 💙 pic.twitter.com/siHzHZ9npb

Grandma Horne-Francis should certainly join the commentary box for her grandson's debut after this fantastic interview on Wednesday night.

No one was prouder of Jason Horne-Francis last night than his grandmother Jennifer! 💙🤍 pic.twitter.com/Pum5ibQ1bU

It appears Jason Horne-Francis loves his new footy club already, so much so that he slept in his new North Melbourne jumper.

Nick Daicos has officially become a Pie and his family could not be happier at the young talent who will follow in the footsteps of his legend father Peter Daicos.

Check out the great video below of Nick Daicos with his parents!

The best friends and family reactions

Once again the AFL draft night was held in a virtual capacity due to Covid-19 restrictions in each of the different states.

Whilst it is a shame that the night is not quite the same as in previous years, it did not stop celebrating the players and their families' reactions to getting picked up in the draft.

Check out the best family and friends reactions below!

Newly recruited Lion, Darcy Wilmot and his friends had arguably one of the best and most entertaining reactions of the night. Wilmot's friends jumped on the young defender when he was announced as a new Lion. Luckily Wilmot emerged without injuries and told Fox Footy that he and his friends would continue to celebrate and have "A few more Pepsi Max."

Such great pictures seeing these celebrations of players being drafted #AFLDraft

Leek Alleer has taken the opportunity to show off his dance moves the morning after getting drafted by GWS at pick 15.

Who wouldn't want to dance like this after getting drafted?

New Bomber Ben Hobbs had an emotional night when he was selected as pick 13 for Essendon.

He told Fox Footy "It's the best day of my life for sure."

Hobbs got to meet Essendon guns and now teammates; take a look at the video below that shows how the moment unfolded!

Hobbs certainly looks right at home amongst the group.

As far as name selection goes, Josh was clearly the first pick back in 2003 for many families as four Josh's were selected in the top 12 of the 2021 AFL NAB Draft.

It turns out Josh was a very popular name for boys in 2003! pic.twitter.com/MUGpycAGQ5