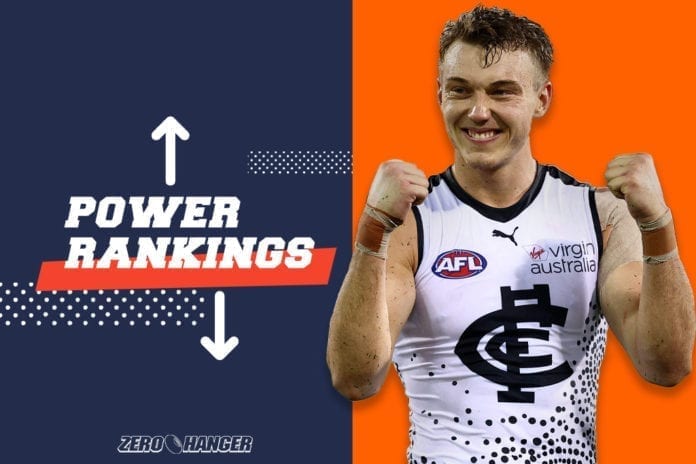 Most of the top sides did what they had to this week, even if they were pushed all the way by their less fancied opponents. Meanwhile, the finals race is starting to heat up, with sides scrambling to set themselves up for a top eight berth. Where does your side stand after Round 13?

Home comforts have proven exactly that for West Coast. After eight wins on the trot, now the real test comes as they enter their second Queensland hub. We’ll be ready to call them the premiership favourites if they ride a short turnaround to beat the Tigers this Thursday night.

Comfortable on the scorecard against the winless Crows – but not on the field, for the first three quarters at least. In the end, the Cats pulled away on the back of their midfield leaders, but they wouldn’t have wanted to have to push themselves that much against the competition’s worst side. We’re not reading much into this – onto next week and a very ninteresting clash against the Bulldogs.

Last week, we gave the Lions five games to get their goalkicking right before the finals. Make that four now. Another dismal day in front of goal but another four points – just barely – salvaged. Still, that’s three straight for the Lions, and their upcoming bye might help with a reset – mentally as much as physically.

Port were made to work for it at home against a bottom four side who looked there for the taking. Credit goes to the Hawks for keeping it so close, but there’s nothing for the Power to take out of that game except the four points. Two more bottom four sides wait in the next two games – no slip-ups and top two could be locked up.

A familiar theme emerged this round: top sides getting pushed by their less fancied opponents, and just about coming out on top on the other end. That was the story of Richmond’s game, who dominated the scoring shots and inside 50 count but only ran out grateful two goal winners against the Bombers.

As far as the top half of the ladder goes, this round didn’t tell us too much – the calm, perhaps, before a very big storm. Richmond-West Coast this Thursday looms as top four defining for both sides.

A slow start to Sunday’s game against the Lions hurt the Saints in the end, who nearly ran over the top of their wasteful opponents in the final term. Whatever the case, we’ve learned – if we didn’t know already – the Saints are a good side, and that no-show against the Cats a fortnight ago was just an aberration. Oh, and Jack Steele is a genuine star.

The AFL’s most up-and-down side turned it all the way up in the third term against a fellow top-eight competitor. More of that and they’ll be a team no club will want to face in a potential elimination final. First they have to get there – a win against the Cats next week might put them on the brink.

The Pies did what they had to against the Kangaroos, but nothing is yet guaranteed for them. Carlton and Brisbane up next in what shape as season-defining games. With vice-captain Steele Sidebottom heading home for the birth of his child, Collingwood’s other leaders will have to stand up.

Melbourne’s wave of optimism was burst in a third quarter blitz by the Bulldogs. 42 more uncontested possessions and 6 unanswered goals hurt – so does getting leapfrogged on the ladder by the time that did it to you. They’re now fighting for their season against the Saints next week.

The Blues were dominant everywhere, except perhaps in the goalkicking stakes. Kick straighter and things might have gotten truly ugly. Carlton are now 6-6 with a percentage of 100 and well and truly in the finals hunt. What a huge game against the Pies it will be next week.

The Giants left themselves too much to do against the Eagles after a very poor start. Better signs after quarter time but the Giants aren’t in the business of good signs and brave losses as a supposed premiership contender. They’ll have to scramble to even play finals this season, and neither of their next two games against Fremantle and Carlton look sure things.

Both sides came in with only four wins, but the Dockers looked a serious class above the Swans on Saturday night. Their defence continues to go from strength to strength – they’ve conceded the least points in the whole comp. Of course, they’re only above the Crows in points scored. Still, this defensive platform is the stuff future finals contenders are built on.

The Bombers stuck around all game against the Tigers, despite having a staggering 42 less inside 50s than their opponents. It’s lucky they looked dangerous every time they did enter, led by electric first gamer Irving Mosquito. The season, however, continues to slip away – a slip-up against the Hawks this week and that’s curtains for the Bombers.

Uh oh. Alarm bells now for Stuart Dew and his Suns, who seem to be in the midst of their patented late season fadeout. This will be a very disappointing end to the season, if they serve up more of what they did against Carlton. They must beat North next week, for pride as much as anything else.

A very spirited, promising performance from the Hawks, who showed there is life at the end of a wretched, injury-hit year. With Jack Gunston, James Sicily, Jaeger O’Meara and James Frawley all out of the side, they really didn’t have a right to push the Power all the way on their own turf. A few more brave losses like that and Hawks fans will feel good about a much needed early draft pick come season’s end.

What a difference a week makes. After running all over the Giants last week, the Swans hit a purple wall. Freo have the most miserly defence in the AFL but two goals from 43 entries is unacceptable at this level, period. That game against the Giants might have been their swansong: it’s hard to pick a game they’ll win looking at their last five opponents.

It’s becoming harder to write anything about North Melbourne every week. Not shocking enough to take the headlines, not good enough to win much praise. Gold Coast are gettable next week – have they got anything left?

That’s now 0-13 (not that anyone’s counting) but that was a much improved effort from the Crows, who were within 9 points of the Cats at the last change. Things got away from them in the final quarter, but those three quarters of footy were about the best we’ve seen from the Crows all year. String together four of them and they might just get that elusive win before the year is out.