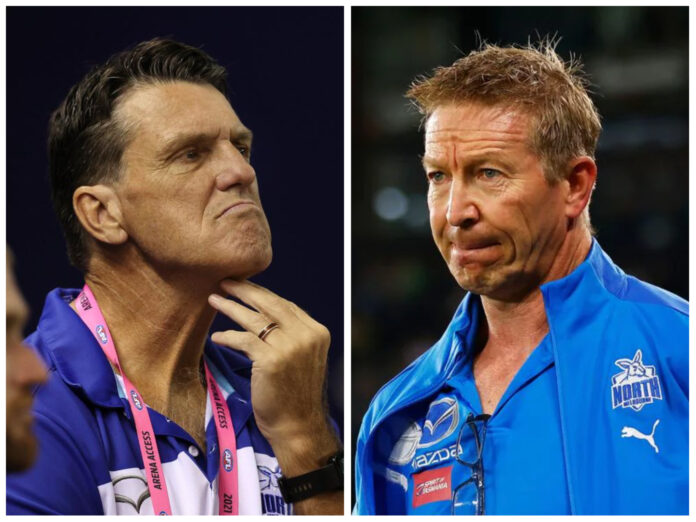 Former Sydney Swans and Melbourne coach Paul Roos has opened up about his recent role at North Melbourne, saying that it was now ousted coach David Noble's decision to remove him from the footy department.

Noble coached the club for 38 games, winning only five of them, leading the Kangaroos to their first wooden spoon, and on their way to a second before they parted ways.

Speaking on Zero Hanger TV, Roos said that at first he enjoyed his time at the club but it became difficult once he knew he was unwanted.

"The first year was good because I was working with Nobes (David Noble) and the coaches... and then at the end of the first year they didn't want me to work with the football department and that was Nobes' decision," he said.

"You know the 'Roosy's not here, he's not coming in etc etc'.

"I think my big learning from that is if the coach doesn't want you to be there, it becomes really really difficult."

Roos, who coached Sydney to a premiership in 2005, says he loved working a new role this season, but the overcast of not being wanted, wasn't easy to deal with.

"So the second year, being this year, I've been working more with the executive team, working with the AFLW. I've loved working with Darren Crocker, Emma Kearney and the girls, that's been really fulfilling. But if you're not really embraced, it's really hard," he said.

The seven-time All-Australian thinks the partnership between himself and the club was gradually settling but couldn't pinpoint a reason for his removal from the football department.

"I think we made some inroads in the first year, and I think David appreciated me being at games and appreciated the conversation we were having, but for whatever reason he made the decision that 'no, we want to spend money elsewhere and don't want Roosy in the footy department anymore'," he said.

When asked if he would continue at North Melbourne next year, Roos' answer was no surprise.

"No, and I think it's best for both parties to be honest."

"I've learned a lot, it's just reaffirmed my views on leadership and culture and all the things that I know, and things that if you don't get right, you're going to be a really bad footy team and that's what I've learned at North Melbourne."