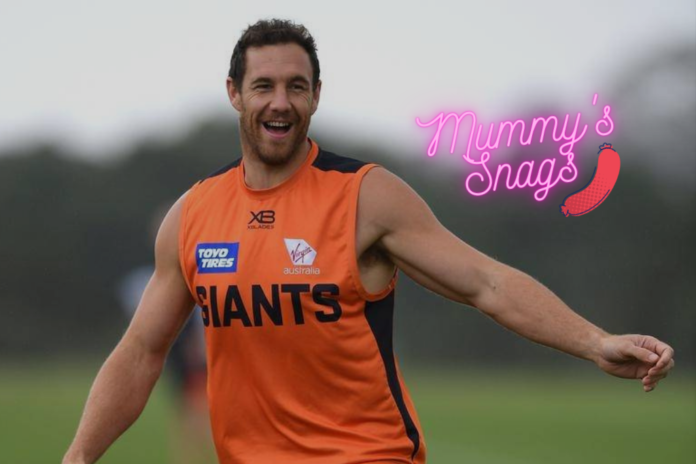 Greater Western Sydney veteran Shane Mumford made his return to football on the weekend, having a key role in the Giants' first win of the season on Saturday night.

The 34-year-old is well into the twilight of his career and having already announced his retirement once, back in 2017, the ruckman is looking ahead to life after football.

Speaking on Triple M following his side's 30-point win over Collingwood the day prior, Mumford revealed he has considered starting up his own sausage business, one that would include some left-of-centre ideas.

"I was actually thinking of starting my own sausage line," he said on Triple M's Sunday Rub.

"Something plain and simple, like Mummy's Snags ... my big dirty head on the package.

"There would have to be bourbon-flavoured in there somewhere."

A man not too unfamiliar with the grounded meat product, a famous tale has previously stated that Mumford once had a record day of consuming sausages at a mate's birthday.

When questioned on his efforts of that sitting by Mark Howard, Mumford revealed he had consumed more than 20 sausages over the course of the day.

"It could be any number," Mumford said. "It certainly gets extended every time."

It was a memorable first game of the year for Shane Mumford.#BigBigSound pic.twitter.com/kURArxAGac

“We would have a barbecue at the footy club and he would have 12 or 16 sausages,” Wright told The Herald Sun in 2017.

“He was a mammoth eater. A seriously big rig and, put it this way, you didn’t want him falling on you.”

Mumford will be hoping his efforts from Saturday night were enough to hold his position in Leon Cameron's side, with Flynn tipped to return for the club's clash against cross-town rivals Sydney in Round 5.