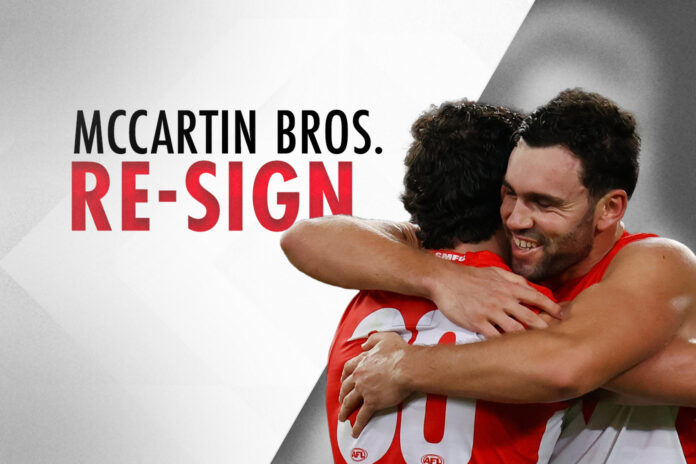 Tom and Paddy McCartin have recommitted to the Swans, signing multi-year deals to keep them in red and white.

Tom, who was drafted in 2017, has penned a four-year contract extension, tying him to the club until at least the end of 2027.

Older brother Paddy has inked a two-year deal, committing to the club until at least the end of 2024, capping off what has been a remarkable comeback year.

Paddy joined the Swans VFL side after five seasons at St Kilda, where he was limited to just 35 games. The former number one draft pick spent two years on the sidelines dealing with the lingering effects of concussion, but joined the Swans as a rookie for the 2022 season.

Tom was drafted with pick 33 in the 2017 national draft, making his debut in Round 8, 2018. In his 93 games played since, Tom has become an instrumental part of the Swans' backline.

Sydney's Executive General Manager of Football, Charlie Gardiner, said the new deals were a credit to the brothers for their hard work throughout this year and across their careers.

“Paddy has done a remarkable job to return to senior football and play a really key role for us in defence,” Gardiner said.

“It has been a testament to his hard work and resilience and we are all incredibly proud of what he has been able to achieve since moving to Sydney two years ago. To see him enjoying his football and getting the best out of himself is fantastic.

“Tom also deserves a huge amount of credit for the role he has played over the past few seasons.

“While he is still only 22 years of age, week in, week out he has been opposed to some the best key forwards in the game and acquitted himself incredibly well.

“High quality key defenders are very hard to find, and we believe Tom is well on the way to being one of the elite defenders in the competition in the years ahead,”