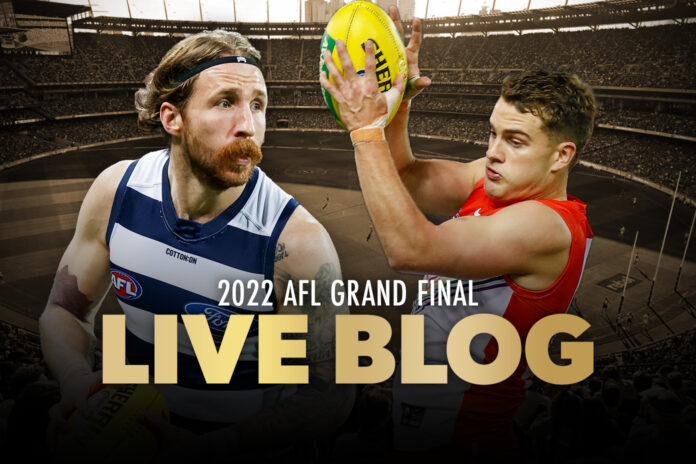 Welcome to Zero Hanger's live blog of the 2022 AFL Grand Final between the Geelong Cats and Sydney Swans from the MCG.

Across the course of the game, we'll give you updates on matchups, injuries, stats and storylines, as well as the award winners after the final siren.

Isaac Smith has won the 2022 Norm Smith Medal for his dominant performance, ending the match with 32 touches, 12 marks, two tackles and three goals.

The full votes for the Norm Smith Medal were:

Voting from the judges:

The Cats have done it! Geelong are the 2022 premiers, defeating Sydney by 81 points at a packed MCG.

Isaac Smith was the leading possession getter on ground, finishing with 32, alongside 12 marks. Chad Warner led the charge for the Swans, ending the day with 29 touches and six tackles.

Scenes on the MCG as time starts to tick down, the Cats getting around their skipper as he kicks an incredible goal to extend the margin back to 81.

Swans get one back through the trusty boot of Chad Warner, up to 25 disposals for the afternoon.

Sam De Koning extends the margin to an incredible 81 points with his major on the goal line.

Parfitt joins the party immediately, kicking his first major with his first touch.

Cam Guthrie has been subbed from the game, replaced by Brandan Parfitt.
13:30

The official attendance figure has been confirmed, with 100,024 people packed in as the grand final returns to the MCG.

The Cats respond quickly with Jeremy Cameron kicking his first in a relatively quiet performance.

A holding the ball decision finally gives Swans fans something to cheer about, Chad Warner converting the shot for the six points. Warner’s goal is Sydney’s first major score since the second quarter.

Cats lead by 74 as we head into the final break.

Things continue to go from bad to worse for the Swans, with Chad Warner giving away a 50 metre penalty. No score as a result, with the ball continuing to remain in Geelong’s forward half.

The Cats hit the 100 point mark with a Cam Guthrie snap. Lead is out to 73 points.

Smith now has 23 touches so far, a game high.

STENGLE! An extraordinary kick from the boundary puts another on the board for the Cats, Stengle’s fourth of the day
17:47

Starting to get ugly now at the MCG. Stengel capitalises on a Sydney turnover and kicks his third goal of the afternoon. Geelong lead out to 66 points.
11:59

Cam Guthrie earns a free inside 50 and snaps truly, earning his first goal with his 11th possession. Cats lead by 59.

Brad Close earns his second major for the day.

Mitch Duncan has the first goal of the second term, his first of the day.
1:00

Sam Reid has been substituted from the game, replaced by Braeden Campbell.

The siren has sounded bringing the first half to an end, Geelong heading to the shed with a dominant 36-point lead.

Sam Reid has come from the ground and gone down to the rooms with less than a minute remaining in the quarter, appearing to still be dealing with that adductor injury.

Isaac Heeney kicks an important goal for the Swans with just his third possession for the game, starting to get his hands on the ball late in this second term.

The Swans finally have their second goal, with Hayden McLean kicking truly to cut at the Cats' lead.

Tyson Stengle gets us underway for the first goal in the second term, extending Geelong's lead.

A run of late Geelong goals sees the Cats lead by five goals at the first break.

Will Hayward has put the Swans on the board with their first goal for the afternoon!

Tom Hawkins has scored the first major of the match after a scrappy first ten minutes between the two sides.

We are underway at the MCG!