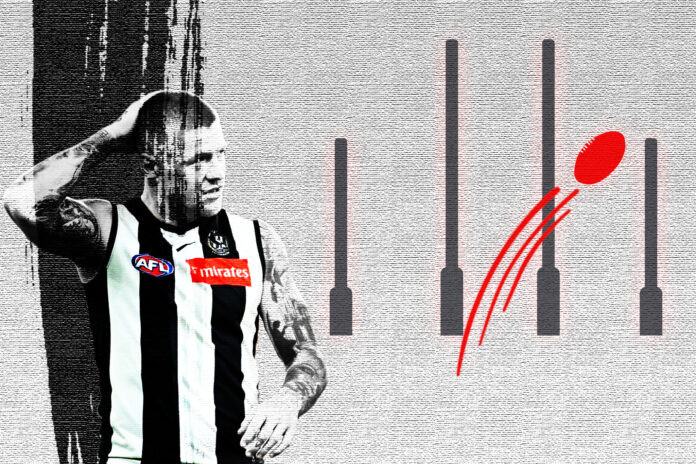 Collingwood’s inability to score is a real talking point and a serious issue. They haven’t scored more than 60 points in half the games they’ve played this year!

In what was arguably the most boring game of football this year, the Collingwood-Geelong game highlighted the issues surrounding Collingwood’s inability to score.

The score conversion hurt and sometimes it’s just one of those days when you kick 6.15.

But when you’re a team that on the weekend couldn’t kick a goal until the 3rd quarter and are ranked 17th for scoring this year - ahead of only the rebuilding Kangaroos – this is more than just a one off.

There are two aspects killing Collingwood.

For perspective, the Bulldogs average 10 more inside 50’s a game than Collingwood.

Considering the Bulldogs score on 48.25% of their Inside 50’s, on average – it is quite a stark difference. The lack of Collingwood I50’s is partly due to their unadventurous ball movement – so many times they fail to understand when they are in a fast play scenario and have 1v1’s further up the ground.

There’s a time to possess the football and allow your forwards to reset and there are other times where you have the defence out of position and it’s time to go fast.

Collingwood fail to recognise this difference all the time.

Jordan De Goey has one-on-one forwards ahead of the ball, and is a long enough kick to take that on.

This was in a game where Collingwood were playing defensive and protecting a lead – but they no longer had the lead! This was a rare opportunity to advance forward and get Port Adelaide on the counter attack, but they didn’t go.

It wasn’t exactly a riskier option either – chipping it around and playing it conservatively eventually led to a turnover and goal for Port Adelaide.

Another similar example by Josh Daicos from last weekend…

It seems from the outside looking in, that Collingwood are over-coached.

Playing to a structure and following a method is important, but sometimes players just need to play footy and play on instincts. This isn’t happening right now.

The second issue hurting Collinwood’s scoring is their score conversion once they are inside 50. They aren’t getting valuable shots on goal – on the weekend kicking a goal on only 13.6% of their I50’s.

They are 17th in the league for goal assists – much of their goals are unassisted. Some of this is a by product of the ball movement issue, some of it has to do with their cattle. They have little options forward of the ball barring Brody Mihocek.

De Goey has been wildly inconsistent and played more midfield time against the Cats, Jamie Elliot injured, Scott Pendlebury playing forward (where he has little experience) whilst carrying an injury, Beau McCreery who has been solid but inexperienced, Will Hoskin-Elliot out of form… the list goes on. There are little scoring avenues to goal.

Injuries have hurt them this year – that’s clear. But the same can be said for many other teams, like Richmond and Brisbane. The difference is those teams have a structure that is understood by each player so that when role players come in they know exactly what is expected of them.

Collingwood’s year has been an interesting one. They initially came into this year thinking they were a finals team before losing five in a row after Round 2. Their president resigned and they slowly tempered expectations on what phase the football club was in. It now looks like they are pivoting to a mini-rebuild, as they are starting to play youngsters. The Collingwood bashing in the media this week is somewhat unfair given that their average games played was 93 games – far less than Geelong in a game that they likely could have snatched if they had kicked straighter in the first half.

Even so, they look confused and unassured when moving the ball from defence to offence. They have a very interesting match up against the Crows this week – a team that is in the middle of a rebuild but has shown an ability to follow a gameplan (as evidenced in our column last week) but still plays with attacking flair and instinct exemplified by Ned McHenry. It’ll be interesting to see whether Collingwood forgo some of the defensive structure to generate more scoring opportunities.