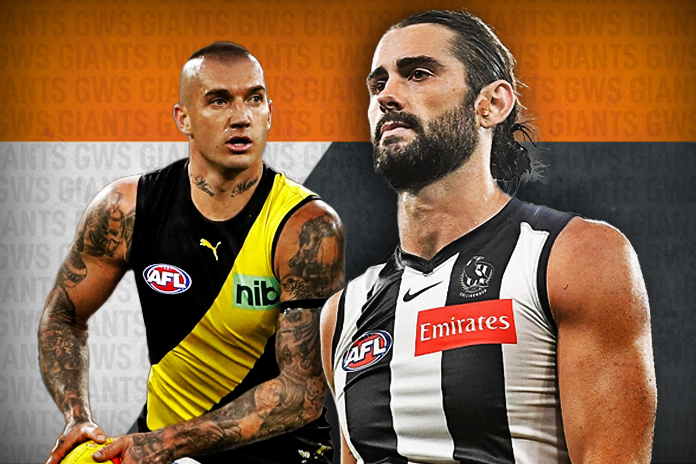 It's been a disappointing season for the Giants in 2022, with the side sitting in 15th after 18 games this season.

A regular finals appearance maker in previous seasons, the Giants haven't been able to find consistent form this year amidst ongoing off-field changes.

Long-time coach Leon Cameron parted ways with the club earlier in the year, with Mark McVeigh taking the reigns as the search for a successor is identified.

To add insult to injury, the Giants are likely to face an exodus this year, with the likes of Bobby Hill, Tim Taranto, Tanner Bruhn and Jacob Hopper linked with moves away from the club this season.

With a tight salary cap, the departures of the quartet could free up money for this off-season should they move to fill the voids left.

In saying that, here are five players the GWS Giants could target this off-season as they look for an improved 2023.

In what has been a career-best season for the key forward-turned-defender, Josh Battle has established himself as a vital piece of the Saints' backline.

Battle remains unsigned at RSEA Park and the Giants should have a look into securing his services to boost their backline stocks.

Sam Taylor is a gun down back for GWS, but the remaining key positions spots aren't set just yet which could provide an opportunity for a player like Battle to slot into the 22.

At just 23 years old, he still has his best years ahead of him and while he'll most likely remain a Saint beyond 2022, he could fit the bill in Western Sydney.

Battle has played all 18 games for the Saints, finally stringing some consistent game time, and has averaged 17.1 disposals, 2.1 intercept marks and two tackles per game.

With Docker's defender Griffin Logue linked to the Saints among other Victorian suitors, Battle could take up a more prominent position alongside Taylor in a struggling backline.