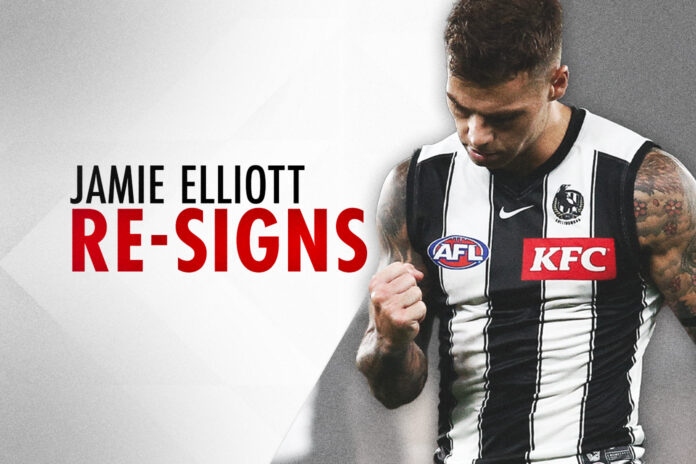 Jamie Elliott has signed a new three-year deal with Collingwood, linking him to the club until at least the end of 2025.

The 29-year-old was set to become a free agent at season's end but has turned his back on the lure of rival clubs, recommitting to the rampaging Pies.

The Magpie veteran made his debut in 2012 and has since played 150 games with the club, celebrating the milestone on Friday night's win over Melbourne. Now set to be a Pie for life, Elliott is shaping as an instrumental piece of a Collingwood side now on an eleven game winning streak.

Collingwood's general manager of football, Graham Wright, praised Elliott's leadership and contribution to the team, both on and off the field, throughout his eleven years at the club.

“We’re pleased to extend Jamie for another three years, and to hopefully see him play out his career at the Club,” Wright said.

“Jamie is an instrumental figure in our program. Across 11 seasons he has a wealth of football smarts which is invaluable to the youth of our group.

“The likes of Ash Johnson, Jack Ginnivan, Beau McCreery and Ollie Henry are products of great improvement credit to Elliott’s influence in the forward line.

“In addition to this, Jamie is a player that stands up in the moments that matter, inspiring all members of our program.

“We respected the fact Jamie was a free agent at the end of this year, and we are glad to come to terms that see him at the Club until the end of 2025.”