In just a matter of days, history is set to be made as the first-ever women’s league will kick-off on Friday night as traditional rivals Carlton and Collingwood do battle at Ikon Park in what should be a cracking game of football.

The build up of this league has been so tremendous, that thousands of people gathered to watch unadvertised practice games between teams in the AFLW, – most notably Melbourne v Carlton last Saturday – and it forced the AFL to move the season opener from Collingwood’s training ground, Olympic Park Oval, to Carlton’s Ikon Park, where the capacity is around 22,000.

With the beginning of the season drawing near, I’ve had a go predicting where each team will finish in the inaugural season, but before previewing the teams, let’s go into the rules that differ from the men’s competition.

There will be 16-a-side and six on the interchange bench as opposed to the men’s game having 18 on the field and four on the bench.

The AFLW competition will use a size 4 football, which is a size down from the men who use a size 5 footy.

The quarters will be shortened to 15 minutes, plus time-on 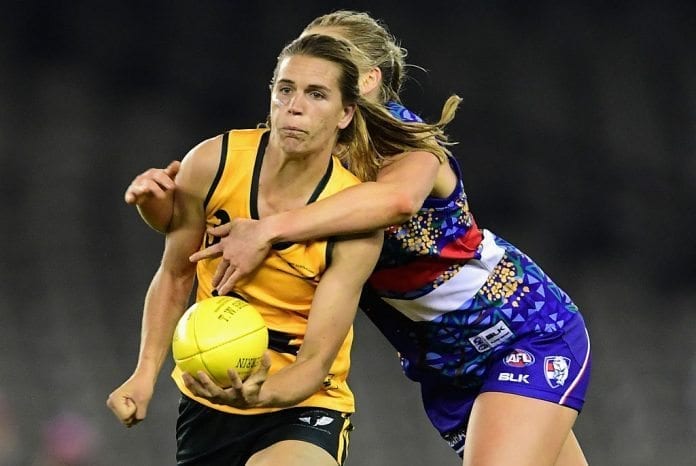 Most of the women that make up Adelaide’s team are a blend of South Australian and Northern Territory talent, but they may have a hard time matching it with the top teams.

Ebony Marinoff is a one of the biggest female footy stars to come out of South Australia and she is only 19 years of age. Watch out for her to make an impact in Adelaide’s engine room almost immediately, as well as their two marquee signings in West Australians Chelsea Randall and Kellie Gibson, Randall in particular is highly-rated among the elites of this competition.

It will be interesting to see how talented goal-kicker Abbey Holmes fares in her first year after starring in numerous EJ Whitten legends games and in the Northern Territory over the last few years, including being the first female to kick 100 goals in a season. Along with Sarah Perkins, who kicked 52 goals in the VWFL last year, they should form a solid pairing up forward.

Given the lack of success of the Brisbane Lions’ AFL side, many fans may expect a similar struggle from the club’s women’s side. However, the Lions will be better than most people think.

With Tayla Harris and Sabrina Fredrick-Traub, they have their two key forwards already sorted, but being so young (Harris is 19, Fredrick-Traub is 20) it might take a little bit of time for them to gel and develop into the superstars both ladies are destined to become.

Emma Zielke will lead this Brisbane team in the 2017 competition and with her competitive nature and sublime skills with the ball in hand, she certainly will be a huge asset to this team, as well as the leadership qualities of Sam Virgo and Leah Kaslar. The speed of Kate McCarthy, Kaitlyn Ashmore and Emily Bates in the midfield will also be exciting to watch.

Carlton’s list is one of the more promising ones in this competition despite numerous players in this Blues’ team under 23 years of age. But despite that, they are blessed with unbelievable talent.

With marquee signings Darcy Vescio and Brianna Davey, they have two of the top 10 female footballers in the country. Vescio is a proven match-winner in the forward line and Davey is one of the top intercept marks in the women’s league. Both ladies can also push into the ground and become imposing figures in the midfield.

I look forward to seeing a Carlton forward line with Vescio combining with talented players such as Bianca Jakobsson, Gabriella Pound and Bella Ayre inside 50, while the midfield must not be underestimated either. With captain Lauren Arnell’s extraordinary leadership and the talent of twin sisters Jess and Sarah Hosking, along with Madeline Keryk and Kate Gillespie Jones, I’m truly excited to see what this team can do this year. 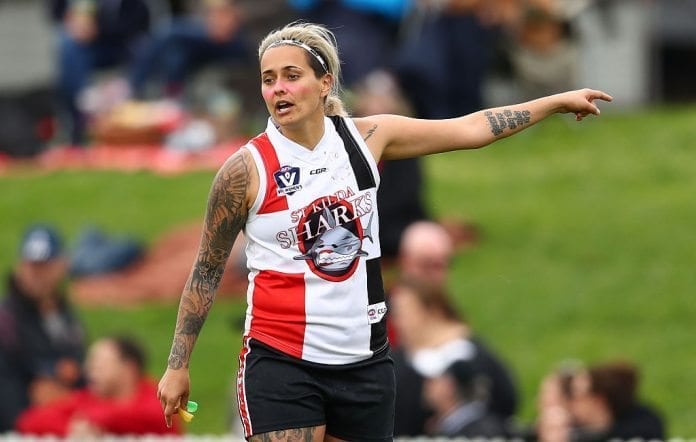 Collingwood’s astute recruiting over this past year has them in a great position to be one of the favourites as the competition.

Firstly, securing the services of talented spearhead Moana Hope as a marquee signing is possibly the biggest acquisition in Women’s footy right now. Fresh off a 100-goal season for St. Kilda in the Women’s VFL, it’s going to be intriguing to see her pair up with fellow dangerous forward Jess Cameron, who is also capable of kicking a match-winning bag of goals on her day.

With their first two picks on draft day, they selected one of the best defenders in Women’s footy in Nicola Stevens and a star midfielder in Steph Chiocci, who oozes both class and leadership, and it comes as no surprise to me that the former Dogs’ captain will lead the Collingwood side in season 2017.

Along with names such as talented young ruck Emma King, exciting young midfielder Brittany Bonnici, and the valuable experience of Alicia Eva, Sarah D’Arcy, Meg Hutchins and Bree White, I don’t see why this team can’t challenge for the flag.

The Dockers have been hyped up as one of the teams to beat this season, given they boast some of the best talent Western Australia has to offer and perhaps the best female coach in the land in Michelle Cowan.

Kara Donnellan is a household name in WA and it comes as no surprise that she is named the captain of the Dockers for the inaugural season. She is courageous, smart with ball in hand and will be a key part of a talented Fremantle midfield that also possesses the likes of Dana Hooker, Brianna Green, Kirby Bentley, Melissa Caulfield and and Hayley Miller.

Look out for Ebony Antonio to be the nucleus of the Fremantle defence. Her courage, athleticism and skills with the ball won’t go unnoticed, while down the other end there will be Amy Lavell, who is a proven goal-kicker, leading all women in the goal-kicking in the WAWFL last year.

But the big question though, is can the Dockers go all the way without one of their marquee signings in Kiara Bowers after she injured her knee last year and will miss the entire season? A four-time best and fairest winner in the WAWFL, Bowers has elite speed and endurance with a willingness to take the game on at every opportunity.

Out of the eight teams, GWS are in the most vulnerable position and will struggle a bit in their first season. But they have got plenty of untapped potential on every line. Marquee signing and vice-captain Emma Swanson turns 22 next month and was a four-time best and fairest at East Fremantle and will no doubt find plenty of the footy in the Giants’ midfield this year.

Utility Jess Dal Pos, defender Maddy Collier, midfielder Nicola Barr, half-forward Rebecca Beeson and ruckman Erin McKinnon are all 23 years old or younger, but it’s just the example of the potential the Giants have and much like the men’s team, should be a force in years to come. They will also regain talented marquee signing Renee Forth next year after a knee injury will keep the West Australian out for the entire 2017 season.

But the one thing that will help out the Giants is the leadership qualities from the likes of Amanda Farrugia, who will captain the squad this year after only a few years of playing footy, and Jess Bibby, who has been a star in the women’s basketball scene for many years. The professionalism and leadership of both ladies will benefit the Giants in the long run.

The Demons were one of two teams that made women’s football what it is today, and given the talent at their disposal for the 2017 season, they should be making a run for a top four spot.

It starts with their leader Daisy Pearce, who is without a doubt, the face of women’s footy. Her amazing skills and ability to make great decisions under pressure will no doubt lift the team a degree, and she will have plenty of support in the engine room with Elise O’Dea, Karen Paxman, Emma Humphries, Sarah Lampard and Lily Mithen all set to spend a lot of time in the middle in the first season.

Vice-Captain Melissa Hickey will marshal the defence for the Demons that won’t be short on talent, with emerging defenders Deanna Berry and Katherine Smith as well as the experience of Meg Downie and Laura Duryea on hand for the Demons in season 2017. Up forward, watch out for the speedy Richelle Cranston to cause headaches and Jess Anderson, who while still young, will give full-backs a handful throughout the year.

The Bulldogs have one of the best lists in the league.

I love both marquee signings of Katie Brennan and Ellie Blackburn as they both have superb fitness and have a knack of finding the footy. With Brennan, they have a tall target to kick to in the forward 50 and Blackburn will have plenty of support in the midfield with the likes of Emma Kearney, Jaimee Lambert, Hannah Scott and Brooke Lochland set to be big factors in the Doggies’ engine room this year.

The defence is an area in which the Bulldogs’ men’s team excelled in last year and the women’s back-line will be an area that AFL fanatics will watch closely, with generals Aasta O’Connor, Kim Ebb and Hayley Wildes down back and exciting key defender in Bailey Hunt who has had a good record against old rival and now team mate and marquee player, Ellie Brennan.

The Bulldogs may not have the likes of Vescio, Hope, Jakobsson, Chiocci and Davey running around in the red, white and blue any more, but there is still plenty of talent on board that can give the put them in the running for the the inaugural AFLW premiership.