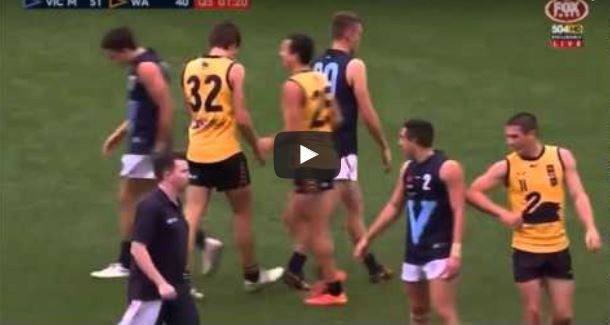 Callum Moore is yet another player in the 2015 draft pool who could go anywhere from the second round of the draft to the rookie draft.

A late starter to Aussie Rules, Moore comes from a basketball background, which shows at times with his read of the play and decision making. What isn’t to be questioned though, is Moore’s approach and commitment to the contest.

The 19-year-old’s athleticism makes him a dangerous utility who fits into that very difficult to match up on mould of player. As a forward, he can be too athletic for the larger defenders and too powerful for the smaller defenders.

However, at times his kicking can be truly woeful. Having said that, as a late starter it is serviceable and it is expected to get better over time.

At this stage Moore is looking a likely second round pick, but this could change with the draft combine to come.
Video: