Geelong may have lost a few veterans down back last season but Andrew Mackie has shown no signs he’s ready to call it quits. Mackie lined up on Freo’s most dangerous forward, Michael Walters and kept him to just one goal and eight touches. He also had 18 touches at an 88% clip, while also having eight intercept possessions.

Tom Lynch may be the game’s next marquee full forward and despite his three-goal haul on the weekend, young Lion Harris Andrew had the better of the Gold Coast Sun. With Lynch the clear focal point of the Suns attack, Andrews continually denied Lynch the ball with five of his seven possessions intercepting the ball in front of full forward. He also produced a potentially game-saving spoil with 1:17 remaining to effectively ice the game for the Suns.

Half back – Elliot Yeo (West Coast)

Concediing 28 scoring shots generally isn’t a good thing in a game of footy however the Eagles defensive unit worked pretty well as a group together and no one stood out more than Elliot Yeo.

Yeo’s impact wasn’t just limited to the defensive half either as he kicked two goals, took 10 marks and managed to gather five clearances in the win to go along with 26 touches.

Centre Half Back – Ben Reid (Collingwood)

Shutting down Travis Cloke isn’t as formidable as it once was however Reid led the Pies defenders as they did a solid job on the Bulldogs talls.

Reid limited his former teammate to just one goal on the night where Cloke’s impact was largely unsighted.

Half Back – Jason Johannisen (Western Bulldogs)

Criticised for his disposal at times in 2016, the Odell Beckham Jr. lookalike collected 30 touches at 87% efficiency while slotting two goals and was influential down the stretch in the Dogs win.

Wet conditions + a season Sydney midfield usually provide the goods for the red and white however Mr. Wines had other ideas on Saturday as he led the Port midfield with 33 touches including 16 gritty ones in the contest. Five tackles, five inside 50s to go along with nine clearances as he led Port to a round one upset in Sydney.

All the talk surrounding Collingwood’s midfield was about Taylor Adams and Adam Treloar however it was Scott Pendlebury who reminded everyone he was still around with a 35 touch (24 contested) – 10 clearance best afield performance.

It took a 26-touch first half for Hawthorn to take notice of the Bomber who flourished in 2016. Merrett gained a massive 749m for the Bombers as he finished with 37 disposals, 7 inside 50s, 7 marks and 5 clearances.

Everyone was looking forward to Thursday night for one reason or another but Dustin Martin made it all about him under the MCG lights. 33 touches. Four goals. 816m gained (the most in the competition). 3 Brownlow votes.

He mightn’t have kicked a bag but Hogan’s increased presence up the ground worked a treat for the Demons after quarter time. He still finished with three goals and eight marks (four contested) to go along with 21 disposals, nine of which were contested.

Adelaide’s two Rory’s were always in the same at some point on Sunday with Atkins’ forward pressure a delight to watch. Seven tackles, 10 inside 50s, five marks, three goals and eight score involvements earns him a selection in the team of the week.

Like Merrett, ‘Raz’ developed in leaps and bounds in 2016. All of Essendon’s small forwards pressured the Hawks defence right throughout with Fantasia finding himself in the right positions to snap up four goals and an unmeasurable amount of excitement in the win.

We’re pretty sure this’ll be a copy and paste job in 2017 as Kennedy continues to terrorize defences. Seven goals straight on Sunday to go along with nine marks and 16 touches to remind everyone who the games best goal-kicker is.

Mightn’t be the best position for him this week but this man deserves a spot in the team nonetheless. Playing more up the ground, Cameron won eight clearances and had six inside 50s to go along with his two goals in Adelaide’s easy win. 14 of his 23 possessions were contested, an impressive stat for the slippery forward.

Melbourne won the clearance count by 13 on Saturday thanks to Gawn’s 49 hit outs. He gave the Demons midfielders first use more often than not and they did not disappoint.

First game as captain and what a game it was. Heppell was relatively quiet in the opening half however when the Bombers kicked five unanswered goals in the third quarter, it was their mop-headed captain who led the way. 34 touches (at 82%), eight marks and three immense goals in a highly emotional win.

Like Heppell, the first time captain steered his side to a big opening round win. Beams had 28 touches and was present right throughout the contest, even when the Suns mounted a comeback.

Expected to have a breakout year in 2017, Oliver started off his 2017 in style with 36 touches, nine clearances, eight tackles and a win. 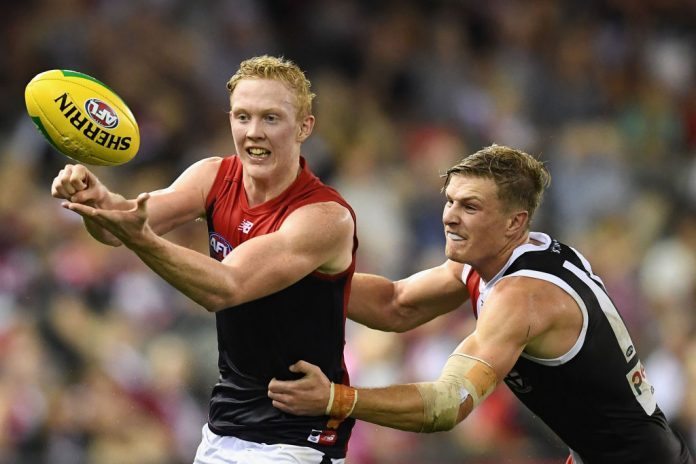 Are we really surprised at what this guy does anymore? Brown and gold stripes or not, Mitchell collected 38 touches in the Eagles win and did what he has done for years, showing plenty of poise in midfield.

The Chad showed us why he’s arguably the games best small forward when he’s on song as he kicked three goals in the SCG upset. Spending time in the midfield as well, he notched up 19 disposals and four inside 50s.

Geelong looked very good going forward in the round’s final game and Steven Motlop had a lot to do with that with his run and carry leading to plenty of good for the blue and white hoops. Motlop finished with three goals, three inside 50s as well as nine running bounces in the wide spaces of Domain Stadium.