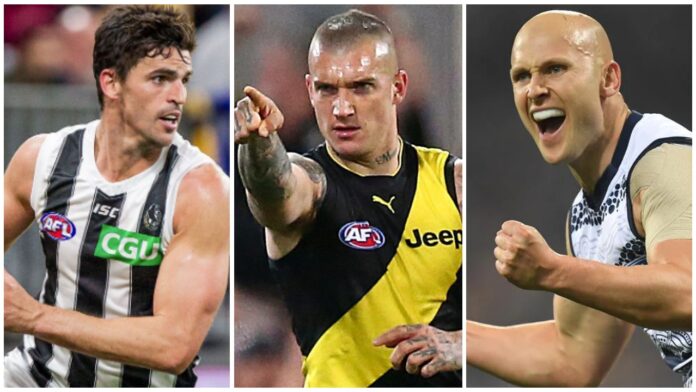 With our list of the 10 best defenders and the 10 best ruckmen since 2010 now behind us, we have shifted our eyes further afield to the men that have a monopoly over the game’s awards – the midfielders.

Due to their ability to find the football at will, it is little wonder why the sublimated numbers on the backs of the AFL’s fleet of elite mids are often those that are ironed onto the back of kid’s guernseys nationwide.

Despite the fact that some superb footballers have plied their trade across the last decade, to earn a place within this catalogue, they must have played at least 100 senior games since the start of 2010.

Furthermore, unlike our best players of the century series, we’ve focused on purists in each position. This would rule out someone like Luke Hodge in the middle, given he played a portion of his career in defence.

With the housekeeping now in order, here are the 10 best midfielders to have run through the guts since 2010.

The Western Bulldogs skipper has claimed three All-Australian blazers, an AFLCA Champion player of the Year award and a trifecta of Charles Sutton Medals.

Still, with eons of time left on the premiership pup’s side, his outfit’s contemporary form and a current average of 26 disposals and a goal a game in 2021, the sky still remains the limit for the former first round pick.

When the pressure is on, call Marcus Bontempelli 📞#AFLDogsSuns pic.twitter.com/9nE6RRDC7k

Even though ‘The Bont’s’ future remains unwritten, what is known is that the start to his AFL career has been as hot as a summer day in Hades, with a quartet of 22under22 squad selections, an AFLPA best first year player and an AFLCA best young player award to prove it.

Whether you are a Dog’s fanatic or not, the overwhelming consensus around Bontempelli’s ceiling is that it is still as high as an inner-city plafond.

Although the Hawks had a monopoly over premiership success for much of the last decade, Sam Mitchell is the only Hawthorn midfielder to make his way into our catalogue.

Controversial? Sure. But, when holding his achievements are held up the light, the contested ball beast stands head and shoulders above his brown and gold brethren.

Despite the fact that Mitchell debuted in 2002, his peak came after 2010, with the second-round draft pick claiming three All-Australians, three club best and fairests, a trifecta of flags and a Brownlow over the course of the previous decade.

Across this same span of seasons, the former captain averaged 28.7 possessions – 10.8 of which were contested – and 5.3 clearances per week.

The Box Hill boy also claimed a premiership medallion in three out of the eight seasons he completed from 2010 until 2017 – a success rate of 37.5%.

Although his prime came before Round 1 of the 2010 season, and he only met our criteria by two games, no list comprised of elite midfielders would be complete without Chris Judd.

After crossing to Carlton ahead of 2008, the former No. 3 pick took on the captaincy and continued his fantastic form from day dot in his home state.

Even though his shoulders were held together by tape towards the end and the Blues’ fortunes – like the Sherrin – perpetually lay in his hands, Judd’s output between 2010 and 2015 was enough to see him earn All-Australian honours twice, the Leigh Matthews trophy for a second time and another Brownlow medal.

Despite the fact that the decorated midfield dynamo managed just 101 games within the bounds of our criteria, ‘Juddy’ did manage to record a mean of 24.2 disposals and 5.9 clearances across them.

Although he has gained a cult following due to his dry wit and his love of a good time away from the game, Dane Swan’s form in the previous decade was well and truly elite.

As our criteria for selection aligned perfectly with his career’s peak, Swan’s sizeable swag of awards - including four All-Australian blazers, two Anzac Medals, a league MVP, an AFLCA Player of the Year Award, a Copeland trophy, a flag in 2010 and the Brownlow medal in 2011 -  is less than surprising.

With an average of 30.4 disposals, 5.4 clearances and exactly a goal a game across his 133 appearances from 2010 until 2016, it is also little wonder why the enigmatic midfielder’s mantel is so decorated.

Having claimed five All-Australian jackets, two club B&Fs and another premiership medallion since the start of 2010, Joel Selwood was never going to miss selection for this list.

Although the Cats’ skipper has proven himself more than adept at winning the ball, with an average of 25.1 touches per game across his last 12 seasons, it is arguably Selwood’s proficiency without it that sees him win plaudits so often.

Since 2012, the hard-nosed midfielder has been voted the league’s most courageous player on three occasions and has also recorded a mean of 5.4 tackles per game.

With this in mind, it should surprise no fan of any creed that the 32-year-old broke the league record for physical cross-examinations in Round 7 of this season, with his whopping aggregate of 1,633.

Joel Selwood has broken the record for most career-tackles in AFL history. 👏 pic.twitter.com/M1OqJRN87f

Classy, clean and ubiquitous are just a trio of adjectives that befit Scott Pendlebury.

With the vast majority of his 323 games coming after New Year’s Eve of 2009, the ever-consistent ball winner has collected six All-Australians, five Copeland trophies, an AFLCA player of the year award, as well as the premiership and North Smith double after his 29 disposals in the 2010 Grand Final replay.

Although the ultimate team success has alluded the silky, Sale-born centreman since, Pendlebury has still recorded a mighty means of 28 disposals and 4.8 clearances across his past 12 seasons.

As the Pies are currently languishing just off the foot of the table, it is unlikely that the 33-year-old will be adding a second flag to his swag of achievements any time soon.

However, with a current average of 26.4 touches per week this season, the sun is far from setting on the champion’s superb career.

As the only player in this catalogue that has collected two Charlies within the bounds of our criteria, some punters – especially those with purple hearts – are sure to be ropable that Nat Fyfe sits outside of our top three.

Although the Lake Grace product’s 2015 and 2019 seasons saw him claim the prize for the league’s best and fairest player, it is Fyfe’s lack of All-Australian nominations, in comparison with those above him, that has seen him slide.

Still, know that we aren’t sinking the boot into the dangerous Docker, as two Brownlows, two Leigh Matthews trophies, three AA blazers and a trifecta of Doig medals is nothing to sneeze at.

Having played the entirety of his career since the commencement of 2010, the 29-year-old’s numbers across 12 seasons have been sublime.

With Fremantle currently hovering around the eight, the Western Australian may yet add a flag to his bag before hanging the boots up.

Although his personality has the ability to divide opinion, Patrick Dangerfield’s proficiency as a footballer is never up for debate.

With an AFLCA player of the year award, a league MVP, four club best and fairests, a Brownlow and an equal record of eight All-Australian selections, any case against the Moggs Creek man has been silenced.

Despite the fact that premiership success has escaped ‘Danger’ across his 14-year career, his averages of 25 disposals, 5.7 clearances and 1.1 goals per game since the dawn of the 2010 season mean that any side that the 31-year-old has laced the boots for has stood a chance in September.

Even though Dangerfield is currently sidelined, and appears unlikely to add a ninth blazer to his coat rack in 2021, the Cats’ current form means that the nominatively determined midfielder might claim an elusive premiership medallion instead.

With four All-Australian jackets, three premiership medallions, three Norm Smiths, three Gary Ayres medals, two Jack Dyer medals, an AFLCA player of the year award, a league MVP and a Brownlow, Dustin Martin has more than made his case to claim top honours on our list.

However, despite this hefty haul, the heavily inked Tiger will have to be content with second place on our podium.

With Martin’s days in boots set to continue for at least another three seasons, this aforementioned swag of achievements - as well as his incredible averages – will only continue to be added to.

Since debuting in Round 1 of the 2010 season, the former first round draft pick has accrued statistical means of 25 disposals, 4.1 clearances and more than a goal per game across his next 249 appearances in yellow and black.

Despite his atmosphere shattering ceiling, his thoroughly impressive curriculum vitae and his proven durability, the tip top Tiger is still trailing arguably the greatest midfielder the game has ever seen.

In Christian theology, the son of man is without doubt the most celebrated figure in their second edition of scripture.

Although a trio of his All-Australians, his three AFLCA player of the year, his trifecta of MVPS, a Brownlow and his two premiership medallions came prior to 2010, Gary Ablett Junior was still undoubtedly the best player that ran through the middle of any ground in the past decade.

With averages of 28.3 disposals, six clearances and 1.2 goals per game across his stint on the Sunshine Coast and his second stanza at Geelong, the son of a gun proved himself as a weapon of mass destruction both in the guts and forward of the ball.

Even though the midfield maestro missed out on a third flag after his Cats fell short in last season’s decider, Ablett was able to add another five All-Australian jackets, a pair of league MVPS and another Brownlow to his jampacked trophy room between 2010 and 2020.

As a future Hall of Fame legend when eligible, Ablett was always going to take out the top gong in our list of engine room wizards.