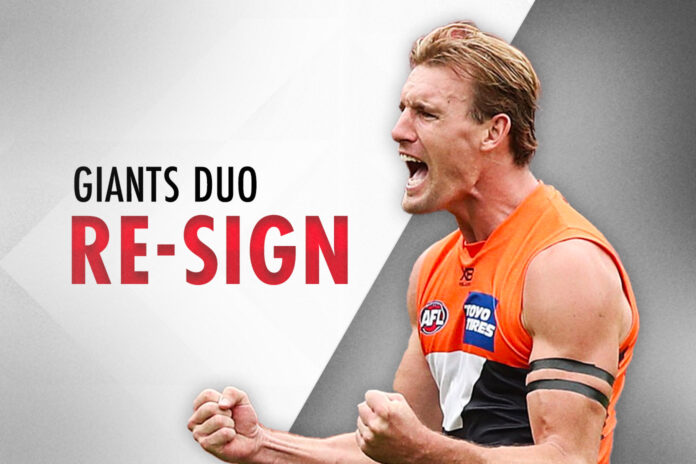 Ahead of a busy off-season for the GWS Giants, with multiple big names linked to leaving the club, two important players have shown their commitment to new head coach Adam Kingsley and put pen to paper on contract extensions.

Utility Lachlan Keeffe has signed on to stay at Homebush until 2023, repaying the faith in a club that picked him up as a delisted free agent from Collingwood in 2017, after he was slapped with a two-year ban from the AFL for testing positive for a banned substance in 2015.

“I’m really happy to be sticking around at the GIANTS for another season, I love living in Sydney and I’ve made some great friendships at the club," Keeffe said.

“We didn’t have the season we wanted to this year but it’s an exciting time for us with a new head coach coming in. We’ve got a talented group, so I’m looking forward to a big pre-season and seeing what we can do to turn it around in the new year."

The 204cm journeyman has played almost every position in the orange and charcoal, having been thrown into the ruck, the backline and also the forward line whenever required.

The 32-year-old has now played 57 games for the Giants adding to his 40 games at the Pies.

Forward Daniel Lloyd has also re-committed to the GIANTS and inked a one-year contract extension. The New South Welshman has booted 63 goals over 78 games, after being picked up in the rookie draft in 2015 at pick 26.

Lloyd was taken as a mature aged recruit at age 23, after failing to be picked up through the NSW Scholarship Program and finally being scouted by GWS assistant coach Mark McVeigh while playing for Killarney Vale in the Black Diamond League.

“I’m really happy to have re-signed, the GIANTS have become an extension of our family here in Sydney, and we love being a part of this club," Lloyd said.

“It’s been an unbelievable journey so far and I’m excited to be continuing it at the GIANTS."

The re-signing of these two players is a big step in the right direction as the club enters a new era under the recently appointed coach Adam Kingsley.

“Lachlan and Daniel are both important senior players in our group, and provide another level of leadership for our young players coming through both on and off the field," Giants General Manager of Football said of the two re-signings.

“Both have unique stories in how they’ve got to this stage and have shown terrific resilience and dedication over the years".

“The club is embarking on a new direction under Adam Kingsley and we’re pleased to have these two a part of that."

GWS will look to retain more of its list ahead of the 2022 AFL trade period, which begins on October 3.