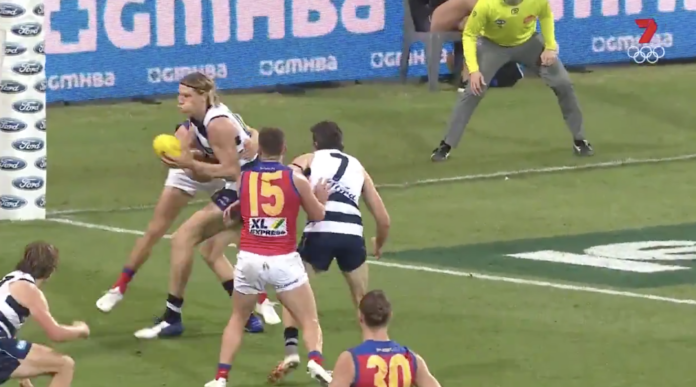 A contentious umpiring decision in the final moments of Friday night's clash between Geelong and Brisbane has left football fans in disbelief.

Cats defender Mark Blicavs was dispossessed of the ball close to the Lions' goal square by Brisbane's Zac Bailey, only for the in-play umpire to not penalise the Geelong tall.

With 23 seconds left on the clock, the Cats were able to scramble the ball over the goal line for a rushed behind, gaining back possession and holding onto a thrilling one-point win.

Lions fans bewildered they hadn't come away with the four points as many thought Bailey should have been given a free kick and shot on goal from point-blank range.

Just throw it. No worries

Speaking to ABC Sport post-match, Blicavs claimed he was in no position to be able to properly dispose of the ball

"I picked it up and there was pressure all over. I tried to get it through but the tackle was bloody good, but yeah, we'll say play on.

In his post-match press conference, Geelong coach Chris Scott played a straight bat when questioned on the umpire's decision.

"I haven't had a good look at that one," Scott said.

"I'll reserve my opinion on that one until i've had a good look at it.

"it's a hard game to umpire, the prior opportunity one, it's always one of the hardest ones to judge.

"I'm a big subscriber to the idea that the game is very hard to umpire."

Chris Scott says he 'hasn't had a good look' at the Blicavs decision. pic.twitter.com/Pcd0UGH0iG

The decision would have added further frustration to Bailey's night, with the pacey Lion pinged for holding the ball at the other end of the ground late into the game to hand Geelong a shot on goal.

While Cats defender Jed Bews missed the subsequent chance for six points, the Cats remained victorious thanks to a late Isaac Smith goal in his second match in the navy blue and white hoops.

Geelong will face Hawthorn in Round 3 for their traditional Easter Monday clash, while the Lions will be looking for their first win of the season when they take on Collingwood on Thursday.