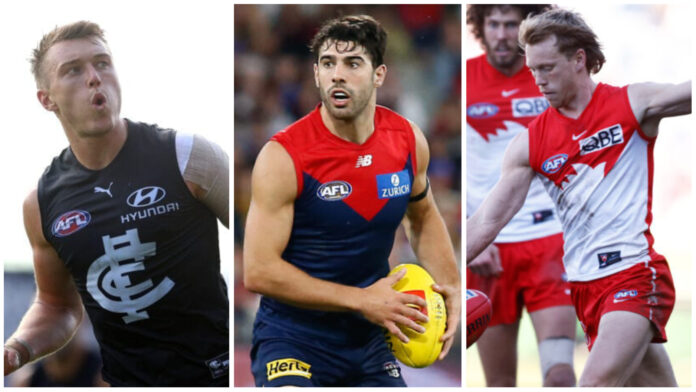 The 2022 Brownlow Medal looks like it will be a hotly contested affair, with multiple big names in the game having consistent seasons.

As the night gets nearer, Zero Hanger takes a look at who is likely to poll strongly in the most amount of games.

Touk Miller, the joint winner (210 votes) of the 2022 Zero Hanger MVP Award, had a remarkably consistent season, supercharging the Suns' inspired and competitive run toward finals.

With successive best and fairest's at the Gold Coast in 2021 and 2022, Miller has taken his game a step further by being in contention for the league's best and fairest.

Miller averaged 28.5 disposals and six tackles per game, alongside eight goals from the midfield this season.

Patrick Cripps had an incredible start to the season, picking up a trio of 30+ disposals and a total of six goals from the first three rounds of the season.

Cripps will be expected to poll at least half a dozen best on ground performances across the first half of the season, which was coupled with his club's rocking start of 8-2.

Cripps embodied a consistent season, culminating in an inspired individual performance in Carlton's last round effort to fall narrowly short of a finals finish.

He eventually finished as the joint winner of the Zero Hanger MVP, also polling at least 12 votes across 10 games.

Oliver essentially attached himself to the Sherrin in season 2022, resulting in a huge season count of 753 disposals, which saw him collect less than 29 touches on just three occasions in the home and away season.

Christian Petracca is forecast to poll in as many games as his teammate in Oliver, but having finished with a total of 173 votes in the Zero hanger MVP, Oliver may draw several three-vote Brownlow games away from Petracca.

Last year's Norm Smith medallist picked up this where he left off by beginning the 2022 campaign with two best-on-ground performances against the Western Bulldogs and Gold Coast in Rounds 1 and 2, in which he picked up 38 and 40 disposals respectively.

Petracca and Oliver's start to the season was near flawless as the Dees embarked on their 10-0 start.

One of his more memorable individual performances came in Round 7 in Brisbane's cruising 25-point away win over the Swans, where he picked up 37 disposals and nine tackles.

The superstar picked up a huge 40 disposals in Round 2 against St Kilda, setting himself up to be a notably consistent performer in the Dockers' midfield group.

Brayshaw will finish with several near best-on-ground performances through the middle part of the season too, including crucial narrow home wins over the Lions, Hawks and Power (Rounds 12, 13 and 16), as well as in Round 17 in a big away win over St Kilda.

Callum Mills has doubled down on last season's transition to the midfield, emerging as one of the game's biggest stars in 2022.

Awarded the co-captaincy at the beginning of the season, Mills polled very strongly in up to eight games as a newfound leader in Zero Hanger MVP.

Mills' 37 disposals and 11 marks against Hawthorn on ANZAC Day earned him a best-on-ground performance in Round 6.

Mills has also typified hard two-way running as Sydney's defensive brute this season, picking up more than 10 tackles on three occasions so far this season, including a huge count of 16 tackles in Round 17 against the Bulldogs.

Geelong's Jeremy Cameron rounds out the most consistently elite players for this season, and is the only key position player among the pack.

A six-goal outing in Round 3 helped Geelong on their way to an incredible 37-point comeback over Collingwood.

In the Zero Hanger MVP, Cameron was awarded three best-on-ground performances in Rounds 6, 12 and 22, in which he kicked seven, six and three goals respectively.

Cameron finished third in the Coleman Medal with a tally of 59 goals.