Australia's #1 independent AFL news source
More
Home AFL Teams Adelaide Crows And then there were 10: Which young guns are yet to land... 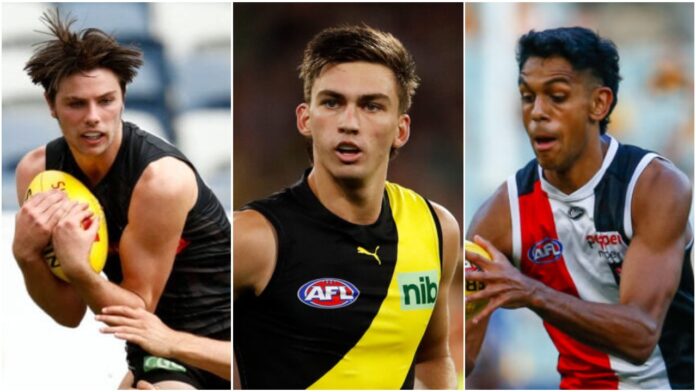 As we reach the third and final bye round of the 2022 AFL season, 10 Rising Star nominations remain up for grabs, with 13 young stars of the competition having already earned their nod.

Pies father-son Nick Daicos (Round 3), Hawk gun Jai Newcombe (Round 5), prized Roo Jason Horne-Francis (Round 7) and Cats defender Sam De Koning (Round 11) are among those to have already locked in a nomination from the season so far.

Newcombe is seen as the frontrunner for the 2022 Rising Star at the midway mark of the year, with Daicos, De Koning and Essendon's Nic Martin likely to be right on his tail.

Richmond's Josh Gibcus would also be a strong chance for the honour, however, the East Point product is among a bevy of eligible players yet to be handed a nomination.

With just 10 nominations left and a plethora of players having shown glimpses of earning a selection in the coming rounds, there are sure to be some standouts that will miss out in 2022.

Gibcus headlines the list of young guns still awaiting a nomination, having failed to look out of place at AFL level, slotting into Richmond's backline with ease.

The talented teenager may not be the only Tiger in line for a nomination, with Round 13 debutant Judson Clarke showing plenty of potential in his maiden outing, while Maurice Rioli junior would have come close earlier in the year.

Essendon trio Sam Durham, Ben Hobbs and Zach Reid are all eligible to join their aforementioned teammate Martin, while Fremantle also frames as a side that could end up with the most nominations.

Defensive duo Heath Chapman and Brandon Walker have already earned nominations, with Nathan O'Driscoll and Neil Erasmus a sniff, while forward Jye Amiss will need to overcome a kidney issue to return this season.

Gold Coast are showcasing more exciting talent this season, with Malcolm Rosas and Alex Davies eligible, while Joel Jeffrey was nominated for his five-goal performance against the Bulldogs in Round 10.

Collingwood has seen Daicos and Jack Ginnivan join the list of 13 nominees, with forward Oliver Henry poised to join them on current form.

Like the Magpies, Hawthorn has injected waves of youth across the past couple of season and could see any of Denver Grainger-Barras, Connor MacDonald, Sam Butler or Josh Ward join Newcombe in earning a nod.

St Kilda trio Nasiah Wanganeen-Milera, Marcus Windhager and Mitchito Owens have also proven to be of value at senior level, while the Crows have relied on Rachele, Lachlan Gollant and Jake Soligo this year.

Geelong has named four debutants in 2022, with Cooper Stephens perhaps the pick of the bunch to potentially join De Koning as a Rising Star nominee.

GWS draftees Finn Callaghan and Cooper Hamilton have both battled injury in the opening half of the year after making their debuts, and could break back into Mark McVeigh's side during the latter part of the season.

Roo Paul Curtis has shown glimpses in his eight appearances, while 2021 debutant Phoenix Spicer and third-year player Flynn Perez could also be a chance.

Swan Logan McDonald claimed the Round 12 nomination for his strong outing against the Demons, with fellow top 10 2020 selection Braeden Campbell able to earn a nomination this year.

First pick Jamarra Ugle-Hagan played in the opening six games of this season but has not been seen since.