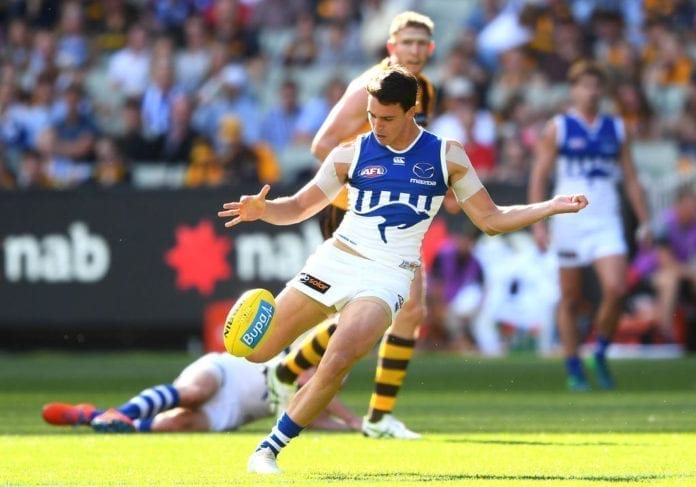 In the footy world, there's few better feelings than tipping a breakout player in fantasy. While it's a huge boost for your SuperCoach or Fantasy team, it also allows for a good dose of smugness.

Picking players who elevate themselves into the 'elite' bracket is as important as picking 'cash cows'. Both are areas you need to nail if you're going to have a crack at winning your league.

Related: Predicting the 10 breakout players of 2022

While the season is still a few weeks away, there's already some players that look like locks for your team. We've put together a handful of names we think are well worth considering this season.

Serong is priced at 82 points, he is a must have. With Nat Fyfe's move forward, plus Adam Cerra's exit, there's a huge amount of midfield time available for him. He's already shown his class and ability, this is his year to become elite. After 66.6 Fantasy points in 2020, he raised that to 82.4 in 2021. We're bullish on him, he's a huge chance to be the competition's breakout player in 2022.

Gresham's injuries have been a worry, there's no denying that. If fit, and he is, he has to be considered. He'll play a lot of midfield time and has a unique role in the Saints' lineup. No other player at the Saints has the same impact at stoppages, Gresham's explosive pace is an asset. Before his Achilles injury in 2021, he picked up 28 possessions in Round 1 and 29 in Round 2. At these prices, he has to be on your radar.

While priced at 80-85, he's started to lock down his role as the midfield bull at North. With Ben Cunnington's future unclear, 'LDU' is likely to see just as much, if not more, midfield time in 2022. Should that be the case, he can easily become a 'premium' player and average more than 100. He's one to monitor closely in pre-season.

It was tempting to go with Tom Green here. But at this price, particularly in SuperCoach, 'Cogs' is impossible to ignore. His dual position status is a huge bonus and he'll be keen to make up for a poor couple of seasons. Form is temporary, class is permanent, we'll back Coniglio to get back to his best. As club co-captain, the Giants will be keen to help get him there.

Day averaged just under 80 SuperCoach points before injury struck, but we've seen his potential. His ability to find the ball and use it well is hard to ignore. As is his Defender position status. He's more of a breakout tempter in SuperCoach and with another summer under his belt, he could explode in his third AFL season. The only worry remains how Sam Mitchell will use him, so watch his pre-season closely.

Preuss has been hit hard by injuries and lack of opportunities. However, he is fit and firing by all reports and is grossly under-priced for what he can produce. At his best, he's capable of scoring 90+ should you wish to roll the dice in the Ruck. Buyer beware however, it's not yet clear who the number one ruckman will be at GWS, so monitor that situation. If he gets the nod, Preuss shapes as one of 2022's great bargains.

Say it quietly, but if Rowell can get back to full fitness, he's in contention for a breakout year. It's hard to forget the terrible injuries of the past two seasons, but even harder to forget his first handful of games. He looked every inch a future Brownlow Medal winner. There'll be more than just Gold Coast fans hoping he bounces back in 2022. Watch his practice matches closely.

At 24 years of age, West Coast took a punt on this WAFL 'Pig'. He won the Simpson Medal for Best on Ground in the WAFL Grand Final in 2021. He also averaged 114.7 points in 19 WAFL games last season. After being overlooked at the Draft six years in a row, Clark will be keen to make up for lost time. Throw in fitness concerns around Luke Shuey, Elliott Yeo and Jack Redden, and Clark needs to be on your bench at least.

Prior to his ACL injury, Hollands was touted as a potential Pick 1. Having missed all of season 2021, he's a popular choice this year. Rightly so as well. He oozes class and has dual position status. On top of that, he should get plenty of opportunity this year in a struggling Suns outfit. Set and forget.

A gun junior, if he gets the chance, his explosive pace will serve him well in an attacking Power outfit. Ken Hinkley loves giving youth a chance, so it's a strong possibility he sees senior footy this year. An intercepting and rebounding defender, he'll have competition, but his pace sets him apart. His SuperCoach average of 90 in his NAB League games indicate that he's a cash cow in waiting.

Don't think, just do. Nothing more needs to be said here, he'll make you money, very quickly. He's already played a year of senior footy in the SANFL, and is ready to go. Having averaged 88 SuperCoach (74 Fantasy) against more mature players, this is as clear cut as it gets. North fans aren't the only ones licking their lips.

Much like 'JHF', there isn't too much going out on a limb here. He will play, a lot. He'll generate cash and quite possibly stay in your side until the last few rounds. After averaging 159 SuperCoach points from five NAB League games, there's no doubting his Cash Cow status. With rumours he was ready to play AFL footy in 2021, he's going to be worth the wait.

Ward was one of the best midfielders in last year's draft and he'll get opportunity under Sam Mitchell. He finished the NAB League season with an average of 143.5 across his last four games. A similar player to ball-magnet Zach Merrett, the only query remains on Mitchell's use of him. If he and when he plays though, he'll make you money. He should be a lock if named for Round 1.

One for the real bargain hunters. At 25 years old, McDonagh is ready to go. He averaged 84 SuperCoach points in the VFL and is a great kick of the footy. Bombers list guru Adrian Dodoro hinted that he could feature early. They certainly didn't draft him to play seconds, so watch this space as he is basement price.

More for SuperCoach, his price is too hard to ignore. He averaged 113 points in Geelong's VFL side last year, while no Hugh Greenwood means an opportunity for a big-bodied mid at the Suns. Constable is the perfect candidate to fill that void. He can find the ball and use it, he just needed the chance. The stars have aligned here, he's got to be in consideration.