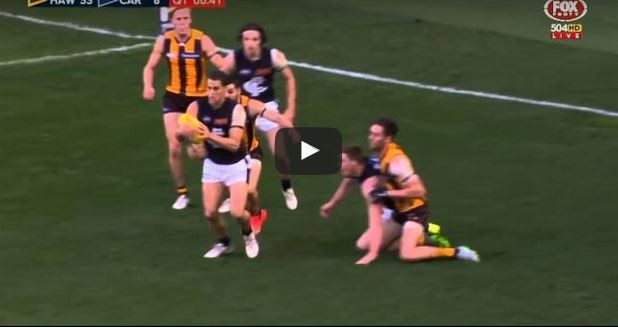 Charlie Curnow is a well hyped player leading into this draft. Unfortunately he is coming off a knee injury which has given us a smaller body of work to look at compared to other prospects when assessing him.

Having said that, prior to Curnow’s injury he delivered plenty to suggest he could become a high level AFL player into the future. His strong marking, endurance and all round polished game make him a great prospect for any club.

What is really exciting about Curnow is his versatility, he can play forward as a genuine contested marking target, play a half forward role where his clean hands at ground level are a highlight or play as a strong bodied inside midfielder. More importantly he can do them all well.

Still it is hard to place a player like Curnow in this years draft, as a late first round/early second round pick he is a steal but if he is picked inside the top 10 there is some associated risk in that selection. I’m a believer though and expect him to go around that pick 10 mark.