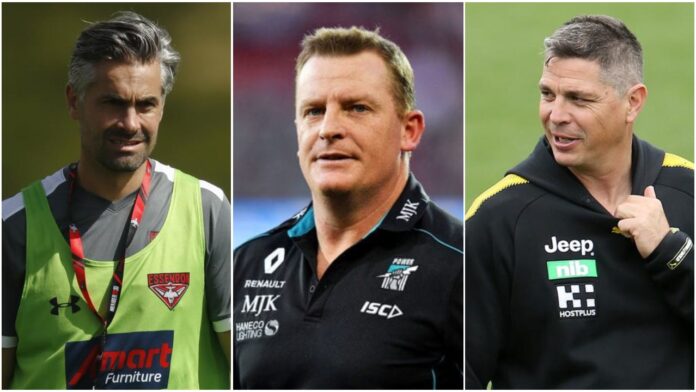 After putting David Teague under a mountain of pressure and reportedly having Alastair Clarkson and Ross Lyon nearing their hook, it seems Carlton have gone from three potential promising options to none.

With Lyon the latest to withdraw from the race, joining Clarkson and Nathan Buckley, the Blues will need to dig a little deeper in moving for a new senior coach.

While it may seem their options are limited, the current coaching landscape is sure to offer Carlton plenty of adept names as they look to succeed Teague.

The former Kangaroos coach is already believed to be of interest to Carlton, but the vacancy at AFL House for the General Manager of Football job may be more enticing than entering the front doors of Ikon Park.

Scott was able to contend for a premiership at his time with North Melbourne with a list being an aberration compared to other finals contenders as far as their pedigree stood.

Despite the test, Scott was able to lead the Shinboners to two preliminary final finishes and firms as the best available candidate on offer.

Was linked to the Blues vacancy following Brendon Bolton's sacking, with Carlton having opted for Teague. Now, with the window open once again, could Voss land himself at Princes Park?

Since his departure from Brisbane in 2013, Voss has been an integral part of Port Adelaide's reign under coach Ken Hinkley and looks to be one of the higher-rated assistant across the competition.

Having already been in the hot-seat, Voss may be able to offer a level of experience many other hopeful candidates can't.

An untried assistant, Kingsley has been listed as a highly-regarded prospect for a future coaching job, having flourished at Port Adelaide, St Kilda and more recently, Richmond.

Kingsley was among some of the final candidates in the running for the previously vacant Collingwood position, which was eventually handed to former colleague Craig Macrae.

A crucial member of the Tigers' recent success, Kingsley has led the midfield/stoppage sector under Damien Hardwick.

Another that came close in the running for the Collingwood gig is Jaymie Graham.

Graham, who has been Adam Simpson's right-hand man for the past several seasons, had been involved in West Coast's defensive and forward departments before stepping into a more senior assistant role.

The former Eagles player was in contention to replace former North Melbourne coach Rhyce Shaw at the end of last season, with David Noble eventually landing the role.

Now set to depart the Eagles, could Graham find himself at Princes Park as part of his next career move?

The St Kilda great and Collingwood interim coach has parted ways with the Magpies, and has already been linked with a move to the Blues.

While that speculation came under the circumstances that Lyon would be on his way to lead the charge for Carlton, Harvey would still frame as potential suitor to succeed David Teague.

Harvey's first coaching job in the AFL was leading the club's development, before stints with the Saints and Magpies, but a reunion could certainly still be on the cards in the form of a more senior position.

The former Bulldogs forward is currently residing with Essendon as an assistant coach and has been key in the Bombers' rise in 2021.

Giansiracusa moved to Tullamarine from Whitten Oval ahead of this year, and was another tipped to be in the running for the recently available North Melbourne job.

Perhaps a more unlikely candidate, but the move could be there should the Blues look Giansiracusa's way.