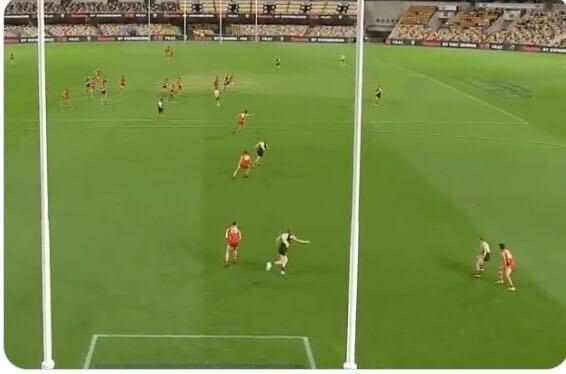 Richmond forward Tom Lynch is in hot water once again after striking Gold Coast defender Sam Collins off the ball in Monday night’s win at the Gabba, per Fox Sports.

The Tigers bounced back following their round 11 loss to Port Adelaide with a triumph over the Suns, but the victory was marred by Lynch’s act late into game.

Does Tom Lynch have something to worry about here? 🤔#AFLTigersSuns pic.twitter.com/nj0gMJVsmR

Lynch managed to slot home two goals for his side, with the second coming from a set-shot 40 metres out.

The Tigers’ spearhead marked the ball uncontested, with replay’s revealing he had struck Collins in the midriff before finding the ball.

The incident is a certainty to be looked at by MRO Michael Christian, who handed Lynch a $500 fine for striking Brisbane defender Alex Witherden a fortnight ago.

While Lynch was able to dodge a suspension for the incident, many believe he won’t be as lucky this time.

Fox Footy panelists dissected the incident, with split opinions made in the post-match discussions.

Hawthorn champion Jordan Lewis said the incident was one the AFL would not be proud of accepting.

“It’s not what you want to see,” he said. “They’re trying to get rid of that punch to the stomach.”

Speaking on Fox Footy’s The Couch, Gary Lyon believed Lynch won’t be on the end of a suspension despite the uproar.

“It’s just a punch to the guts. The AFL have demonstrated that they’re happy to condone these. They don’t see them as worthy of a week’s suspension.

“They’re talking about spreading the game up through the Queensland market. Well the whole of the Queensland mums and dads will be watching this and go: ‘Oh well, footy’s alright, you can punch blokes in the guts’. Write your cheque, $1500 and away you go.

“What happens if Sam Collins turns around and punches him in the head?”

“I can’t wait to see these boys go at each other next time.”