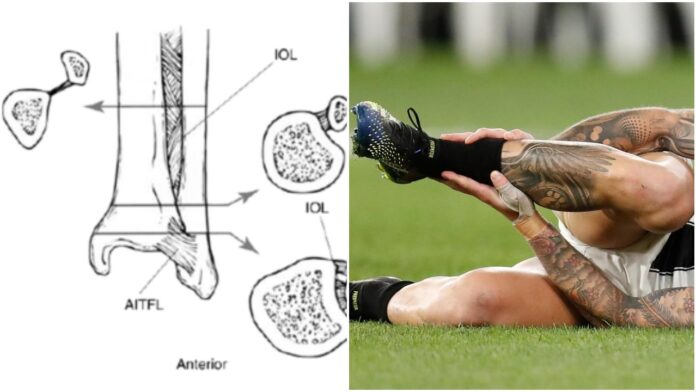 The apparent buzz word for the 2021 AFL season seems to be 'syndesmosis', as it appears that this injury has manifested itself out of thin air to riddle the health of players every other week.

With high-profile players like Patrick Dangerfield, Adam Treloar, Adam Cerra and Zak Butters among many others going down with the injury, it appears as if every time a player doesn't jump up instantly after contact that syndesmosis is thrown about as the reason for this.

So what is the syndesmosis? How does this injury occur? Where has it come from? Lets get into it!

In order to understand how an injury no one had seemingly heard of can occur, one must first understand what the syndesmosis is.

The syndesmosis is a fixed joint made up of many fibres and held together by ligaments. It’s located near the ankle and in-between the shinbone and outer leg bone (per, healthline). Essentially a joint most people wouldn't know they have as its tucked away between the top of the foot, ankle and lower leg.

How can you injure something that’s seemingly tucked away amongst the inside of several bodily structures?

The typical manner in which a syndesmosis injury can occur is when high rotational forces are placed on a fixed foot with direct impact to the ankle (Syndesmosis Injury Part 1: Diagnosis and Evaluation). The awkward twisting force placed on the ankle when the foot is planted is what causes this damage to the syndesmosis as it’s structural integrity is vulnerable in this compromised position.

The classic example being when a player is tackled and their foot gets trapped underneath them, they experience the force of their opponent and a pull on their ankle as the body turns over the planted foot.

Syndesmosis has always existed but it’s often mistaken for a high ankle sprain in less severe cases, making it one of the hardest sports injuries to detect.

This can result in players not receiving the appropriate treatment for the injury and even playing through it unknowingly, which may leave a player susceptible to greater damage if placed into another compromising position/s over time.

This misdiagnosis can occur as the varying consequences from lower to higher grade injuries can range from impacting a player's confidence to run and jump while generating a sense of doesn’t-feel-right, to causing excruciating pain with an inability to walk or weight bear (Syndesmosis Injury Part 2: Treatment and Rehabilitation).

An example of this would be if a player taped up a tweaked ankle that ended up being a low grade syndesmosis injury, to elevate the discomfort and continue through a game, the eventual wear and tear and lack of appropriate rehabilitation can leave the player vulnerable to a more damaging grade syndesmosis injury in the future as they continue with game specific movements.

Therefore, the emergence of syndesmosis may be in part due to better diagnosis of the injury itself instead of more injuries occurring.

Outside of the physical contact of the game there are other factors that may impact the likelihood of suffering a syndesmosis injury. These being, having the ankle fixed in an immobile position and playing on artificial/less natural surfaces.

In relation to footy, the ankle can be placed into this immobile state by having it taped, which increases the mentioned rotational forces at the foot when physical contact ensues or performing game specific movements.

The same forces are also more prevalent on artificial turf, although the AFL doesn't play games on this surface, there may be an issue with the way the grounds are being maintained during the pandemic era which is indirectly contributing to this type of injury.