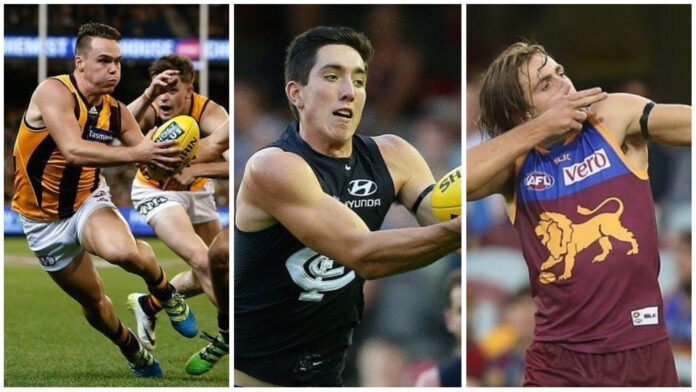 The next stop in revisiting past Under-18 All-Australian sides is 2015, and while there are some similarities to the year before with the number of players still remaining, 2015 doesn't feature as many stars.

Seven of the players who found themselves on this team are no longer on an AFL list, with two of them never playing a senior game.

Eight 22under22 selections, one All-Australian, one best and fairest and one premiership has come out of this group, lowly compared to the previous year's group's achievements.

With hindsight, it's easy to analyse and judge selection and drafting, but at the time there's no knowing if a player's potential has been exaggerated or not.

Two of the six defenders are no longer AFL listed, with Nick O'Kearney failing to make a senior appearance at St Kilda and Kieran Collins playing just one game in three seasons for the Bulldogs.

Eric Hipwood, since being drafted by Brisbane in 2015, has become a handy key forward for the Lions. He was their leading goalkicker in 2018 and won three selections in the 22under22 team from 2017-19.

Off the half-back line you have Jarrod Berry, Jacob Weitering and Riley Bonner.

Berry has cemented himself in the Lions engine room, having played 108 games thus far while Bonner can be found up the field at times at Port Adelaide, but has had a run of injuries.

Carlton's Weitering was the 2015 No.1 draft pick, and with good reason too. The 2020 John Nicholls Medal winner has become one of the competition's premier key defenders, having made the 22under22 side and All-Australian squad three times. It could be argued that he could have made the final AA side at least once.

Those who aren't include Kiran Lovell, who played just two games for Hawthorn, but won a premiership with Box Hill in 2018 before he was delisted.

Luke Partington played six games for West Coast but has fared much better in the SANFL since being delisted, winning a premiership and the Magarey Medal (league best and fairest).

Gach Nyuon was rookie-listed at Essendon but ran into off-field trouble and didn't play a single game.

Ben Keays made the interchange in 2014 but is a starter in 2015. He has gone from being delisted by Brisbane to now starring in the Adelaide engine room for the past three seasons.

Jacob Hopper was picked up by GWS with Pick 7 and has proved his worth. He equalled the record for most disposals on debut with 32, and now after 114 games, he finds himself at Richmond.

Rhys Mathieson finds himself on the outer at the Lions after 72 games, but dominated in the VFL this season to eventually cement his spot in Chris Fagan's side.

At half forward of this Under-18 AA team we see Darcy Parish, Aaron Francis and Harley Balic.

Parish and Francis were both drafted by Essendon, the former had a breakout season in 2021, taking home a plethora of awards, including the ANZAC Day Medal and All-Australian honours. Francis struggled at times with the Bombers, and after 54 games in seven seasons, was traded to Sydney.

Balic played four games for Fremantle, winning a premiership with reserves side Peel Thunder in the WAFL. After two seasons he was traded to Melbourne, but retired in his first season at 21 years of age. He passed away in January, 2022.

In the forward pockets is Ben Ainsworth, who has played 88 games for Gold Coast, and 113-game Saint Jade Gresham, who has two 22under22 selections and a club leading goalkicker award to his name.

The full forward of this team is Josh Schache, who won the Larke Medal (best division 1 player) for his performance in the Under-18 Championships in 2015. He has now joined his third club in Melbourne, having previously played for the Lions and Bulldogs.

This motley crew is highlighted by Brandan Parfitt, who has played 112 games with Geelong and was a part of the 2022 premiership team.

Also included on the bench is Jacob Allison, who played 10 games with Brisbane between 2017-2020, Sam Petrevski-Seton, a former Blue and now Eagle, and Will Snelling.

Snelling played just one game with Port Adelaide in Round 23, 2016, and was delisted in 2018. He joined the Bombers through the 2019 Mid-Season Draft and has played 41 games since.