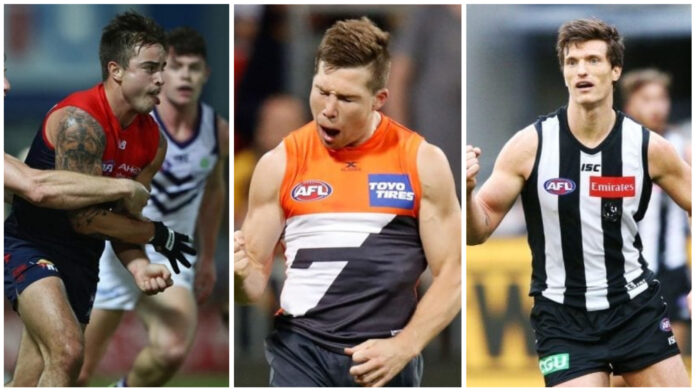 In the next instalment of our Under-18 All-Australian side flashbacks, we delve into the 2011 team and the eventual AFL stars it's filled with.

2011's talent pool is littered with current and former stars of Greater Western Sydney given the year was aligned with their opening draft night - a count that saw the New South Wales side hold a plethora of early picks.

The Giants would go on to draft seven players from the 2011 U18 All-Australian side, including two first-overall selections.

Just half of the 22-man side remain in the AFL following the 2022 season.

The defensive cohort for the 2011 side is home to a number of household names in the AFL, however most have featured in the top flight outside of the backline.

Sitting at centre-half-back is Collingwood forward Brody Mihocek, who wouldn't go drafted until 2017 after plying his trade through the VFL. Partnering him as the key-position options in defence was former Bulldog and Swan Michael Talia.

Given GWS' strong standing for the 2011 National Draft, a number of their top selections at the draft form the midfield. Superstar Toby Greene and skipper Stephen Coniglio are part of the U18 All-Australian side's engine room alongside former teammates Dom Tyson and Will Hoskin-Elliott.

Coniglio claimed the Lark Medal in 2011 following a stellar season with Western Australia.

No.1 pick Jonathon Patton headlined the attacking third of the side, while his succeeding top draft pick Lachie Whitfield also landed a spot in attack despite being a bottom-age player at the time.

Hawks livewire Chad Wingard paid with Whitfield on the flanks, while former Brisbane and Port Adelaide utility Sam Mayes was named at centre-half-forward.

The pockets consisted of former Magpie and Demon Ben Kennedy and Hunter Harrison Medal (Division 2 best and fairest) winner John McKenzie - who was the only player in the side to go undrafted.

Leading the interchange is dual All-Australian ruckman Brodie Grundy and now-ex-teammate Taylor Adams, who was another star name to find himself at the Giants on draft night.

Joining them on the bench was premiership Bulldog Clay Smith and former Adelaide midfielder Mitch Grigg, who eventually returned to South Australia to claim two Magarey Medals with Norwood.