The Murray Bushrangers are well known for producing quality AFL players. So strong is the area, that part of it was zoned to the GWS academy to ensure priority access.

While the Giants have had some success with players coming from the area, they aren't alone. Looking through the list of players that have come from the Bushrangers, one thing stands out, the sheer depth of key position quality.

The region has produced some of the game's great power forwards and cult heroes. However, it's not just the big men from the Murray that have the star power.

The Bushrangers have also produced some of the toughest and most successful clearance machines of the modern era. Premierships and All-Australian's have become the norm for some of these beasts.

With all of that said, we found picking the side to be tough work. Here's our best ever from the Murray Bushrangers.

While not as star-studded as some of the other regions, the Murray has produced plenty of reliable defenders. As a result, there's a handful of premiership medals amongst them.

The Hawks managed to do well for their defenders from the Murray, with Joel Smith, a multiple All-Australian and 2001 best and fairest winner coming from the Bushrangers. While not as eye-catching, Taylor Duryea was so dependable for the Hawks that he won two premierships in his time at Waverley.

Former Suns and Bulldogs defender Jarrod Harbrow gave great service to the league across his 15 seasons in the competition and has since become Gold Coast's games record holder.

Ben Reid was exceptional for Collingwood for years, taking part in their premiership win in 2010. If not for injuries, his career likely would have gone on to even greater heights.

The same could be said for tough Kangaroos Captain Jack Ziebell, who has led from the front, at times perhaps to his own detriment.

On the flip side of that, Jack Crisp hasn't missed a game since joining Collinwood and this year won the club's best & fairest. As dependable as Crisp, Dougal Howard has been admirable for the Saints and Port Adelaide, slowly developing into one of the game's most solid key defenders.

Still with work to do, but with plenty of potential, up and comers Lachie Ash and Ben Paton have looked as though they'll have long careers at AFL level. Clearly, the Murray is a good place to find yourself a tough, no-nonsense defender.

Plenty of the game's best midfielders have come from the Bushrangers. With them has come a plethora of premiership medals, Best and Fairests and All-Australians.

Amongst the crop that earned selection in the best 22, there are four premiership medals, nine Best and Fairest honours and seven All-Australian selections.

The awards list is as impressive as the players themselves. Steele Sidebottom is perhaps the fittest player to ever play AFL, a known running machine who has been nothing short of exceptional for over a decade. His premiership medal sits comfortably alongside his two best and fairest wins.

Similarly, Brett Deledio was one of the most dynamic players in the game until injuries hit. His versatility served the Tigers well as he won All-Australian selections and Jack Dyer Medals over a prominent seven years.

With cult hero and ageless wonder David Mundy also hailing from the Murray, it's beginning to seem like maybe there's something in the water. Aside from his All-Australian jacket and Doig Medal, Mundy this year polled 20 Brownlow votes at the age of 36.

It doesn't end there, the rucks to come out of the Bushrangers have been impressive. Geelong big man Steven King heads a strong list that also contains Hamish McIntosh and Ben McEvoy.

Plainly, winning clearances has been important to the Bushrangers, resulting in some contested beasts. Tom Rockliff at his best could get to, and win, contest after contest, before using his pace to burst away. An All-Australian jacket and two best and fairest wins were just rewards.

Finally, perhaps the cream of the crop, the Murray lays claim to the best contested beast in the AFL today. Clayton Oliver has been brilliant for the past few seasons, amassing possessions at will.

A premiership medal this year has capped off an already impressive CV, and at just 24 years of age, there is plenty of time left for him to add to it.

This is where the real cult status comes in. Not to mention, the star power. The Bushrangers can claim two of the modern eras greatest key forwards and one of the best small forwards to have played.

Steve Johnson will go down as one of the game's greatest mavericks. Capable of the sublime, his career was nothing short of spectacular. 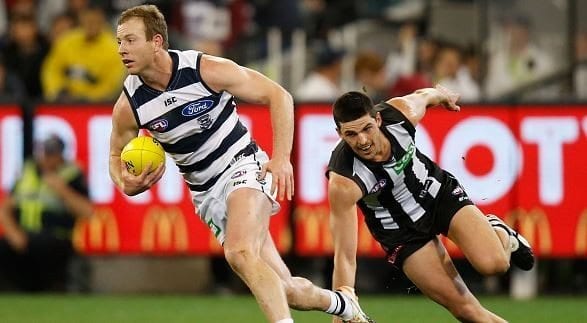 Likewise, Adem Yze was a highlight reel for the Demons during his years. Capable of feats to lift the crowd to their feet. However, it's not all glitz and glamour at the Bushrangers.

Daniel Cross was one of the more unheralded players during his career, the ultimate professional who served with distinction.

The real star power however, is always the key forwards. There has been no bigger forward 50 presence in the last 20 years than Fraser 'G-Train' Gehrig.

Gehrig started out as an athletic wingman before his move to the Saints resulted in him becoming a force. There was scarcely anything more frightening to the opposition that the 'G-Train' in full flight.

Except perhaps, Barry Hall. Despite being a terrifying presence, like Gehrig, Hall was a goal machine. Combined they kicked 1300 career goals.

Add in Justin Koschitzke and it's clear that the big men reign supreme for the Bushrangers.

Finally, since he was never drafted out of the Bushrangers, Wayne Carey is ineligible, yet he is easily the greatest player the region has produced. An article on this region would be incomplete without mentioning 'The King'.

After all is said and done, it's a tall team, but reliable, hard-working, tough, and most of all, extremely talented.

The 'best of the Murray Bushrangers' side: