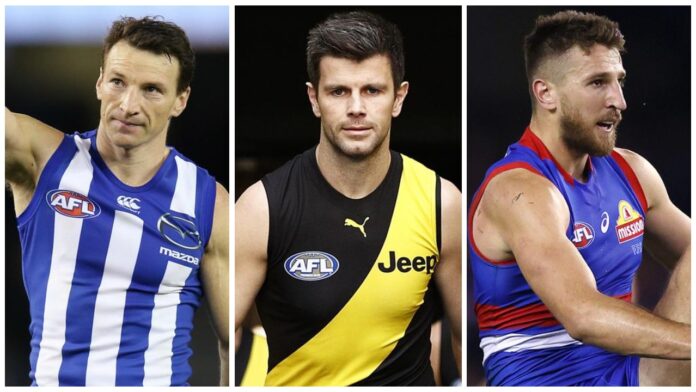 Representing northern metropolitan Melbourne, the Northern Knights have been a strong side in the state league highlighted by their four premierships in a row between 1993 to 1996.

A string of household names have risen from the Knights' development program and have gone on to become stars at the AFL level.

From premiership players to best-and-fairest winners and a Brownlow Medallist, the star power in this side is impressive and would certainly be hard to beat.

Having crunched the numbers, here is our the best team of AFL stars who graduated from the Knights' system.

The Northern Knights defence boasts multiple premiership players who were a part of dynasties at their respective clubs.

Leading the way in defence are three-time premiership players Chris Johnson and Dylan Grimes. Johnson won his three with the Lions whilst Grimes with the Tigers. Given their prowess, these two defenders would prove a nuisance to opposition forwards on a weekly basis.

Hurley is a two-time All-Australian in the AFL and starred for the Knights at state league level by earning selection in the TAC Cup Team of the Year in the two seasons he played at Cramer Street.

Prestigiacomo was a mainstay in the Magpies side as a key defender throughout the late 90s and 2000s. 'Presti' and knew how to shut down the star forwards of the competition, with Jonathan Brown and Matthew Richardson both saying he was one of the hardest defenders to play against.

Rounding out the Knights backline are Magpies' premiership players in Heath Shaw and Ben Johnson.

Shaw was a consistent defender across half-back for both the Pies and GWS, and was a key member of the 2010 premiership side.

Johnson was a hard-nosed defender and one of Collingwood's best players throughout the 2000s, capped off with a premiership in 2010.

The Northern Knights have produced some serious talent in the centre circle over the years, with premierships, best and fairest winners and All-Australians sourced straight from the engine room at Preston City Oval.

Headlining the midfield is current star Bulldog, Marcus Bontempelli. Recently voted the best player in the AFL in 2021 by the Zero Hanger team, 'The Bont' has a premiership, four All-Australians and four best and fairests at the age of 26 and should continue to deliver for years to come.

When healthy, Kreuzer was as influential to his team as any other player and was the most talented ruckman to come out of the Knights program.

The Northern Knights definitely know how to develop skilled players inside the forward 50.

'Boomer' played 432-games for the Kangaroos, which included a premiership, four All-Australians and five best and fairests.

A crafty small forward who would run rings around his defenders, kicking 518-goals across his career.

Key Collingwood forward, Anthony Rocca is also a must-have in the side. The big brute booted 415-goals across his 242-game career, which included four leading goalkicker awards with the Magpies.

Talented players to come out of Preston City Oval that deserve a spot in the side include two-time premiership player, Blake Caracella, premiership Swan, Rhyce Shaw, skilled Bomber, Brent Stanton and premiership Tigers in Jayden Short and Nick Vlastuin.

The 'best of the Northern Knights' side: