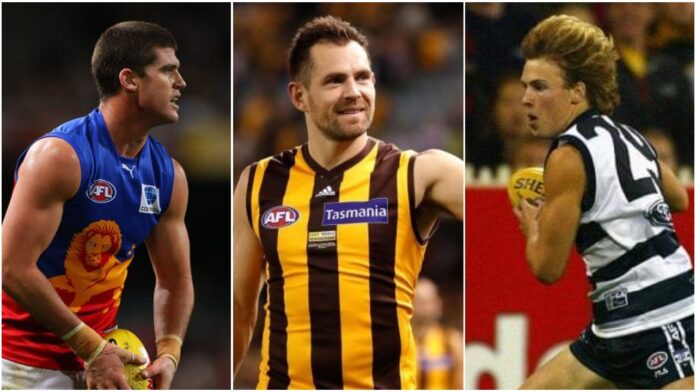 The Geelong Falcons have proven to be one of the more elite state league sides in producing future stars of the AFL, earning the label of a 'footy factory'.

Since their inception in 1992, the Falcons have continued to see graduates join the top flight and make a renowned name for themselves.

Looking through the decades of talent to come from the Kardinia Park and the greater Geelong area, we select the best side of AFL players to have represented the Falcons.

An accumulative backline of former Falcons is one to be very wary of, with fierce defenders and hard-hitting backmen among the best to ever represent Geelong in the TAC Cup and NAB League level.

Collingwood premiership captain Nick Maxwell joins the Falcons' best defensive ranks and was originally overlooked at the National Draft, joining Collingwood as a rookie selection ahead of the 2002 season.

When it comes to producing talent in the engine room, the Geelong footy factory is almost unparalleled, with Brownlow medallists, premiership captains and a plethora of best and fairest winners leading the way.

As expected, many of those plaudits are dominated by Cats players from this century, with the likes of Gary Ablett Jnr, Jimmy Bartel, Cameron Ling and Patrick Dangerfield all hailing from the Falcons system.

For the ruckmen, former Fitzroy and Port Adelaide tall Matt Primus leads the charge, while Docker Sean Darcy looks to be setting his sights on the throne as the Falcon's best alumni ruck.

The Falcons' attack has always boasted sharp teeth, with their history of spearheads headlined by towering duo Jonathan Brown and Scott Lucas.

The pair combine for over 1000 goals, both adding premierships to the Falcons' champions board and multiple best and fairests at their respective clubs.

Swans premiership forward Amon Buchanan featured with the Falcons and was a Rookie Draft recruit to Sydney, playing a total of 134 games between his time with the Bloods and Lions.

Former premiership Cat Allen Christensen is another notable retiree to have featured for Geelong at both the TAC Cup and AFL level, sharing his time between Kardinia Park and Brisbane for 133 career games.

The 'best of the Geelong Falcons' side: