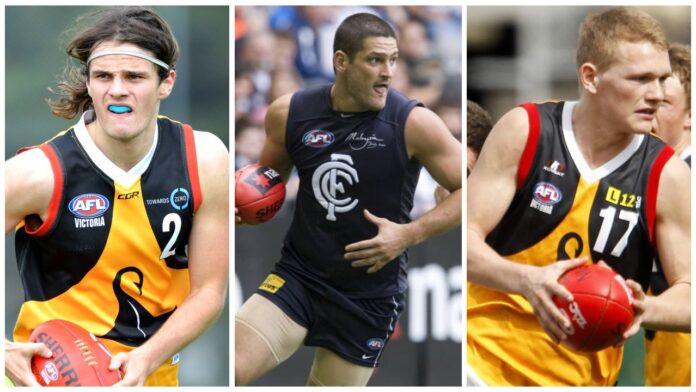 The Dandenong Stingrays have been consistently competitive in the NAB league [previously named the TAC Cup], with six grand final appearances and one premiership since its inception in 1992.

Their strong performances have led to Stingrays products turning into stars at AFL level.

From premierships to All-Australians to best and fairests to Coleman Medals, the names in this side have done it all.

Check down below to see which players have made a name for themselves since graduating from the Stingrays program.

The Dandenong Stingrays have developed an array of skilful defenders that any opposition forward line would be afraid to come up against.

Triple premiership Lion Justin Leppitsch leads the way for the defenders with skills and leadership being key in the Lions success in the early 2000s. Along with the three-peat, 'Leppa' attained a best and fairest award and three All-Australians.

Up and coming Blues defender Jacob Weitering holds the other key position spot in the side due to his continued improvement into one of the best defenders in the game. Highlighted by a Carlton best and fairest award last year.

Notable Stingrays alumni in defence in the AFL include a pair of Saints in Zak Jones and Hunter Clark and Carlton defender Nic Newman.

A mix of current and past midfielders make up the engine room of former Stingrays products.

Highlighting the lineup in the centre circle is star Swan Luke Parker. The inside midfielder is a classy player and his current count of 235-games has produced a premiership, an All-Australian and three best and fairests.

The ruck position goes to Demon Jeff White who was a quality ruckman who earned a best and fairest as well as All-Australian honours in 2004.

The Stingrays forward line boasts some serious top-end talent with a dynamic of big key forwards along with quality crumbing small-forwards.

All-time greats Brendan Fevola and Stephen Milne headline the forwards, with both possessing amazing goal-kicking prowess that led to them becoming such successful players in the AFL.

Fevola was a two-time Coleman Medallist who led Carlton's goalkicking for seven years in a row, totalling 623-goals over his 204-game career.

Milne turned into one of the best small-forwards in the game, kicking an impressive 575-goals in 275-games, which included two All-Australians and is a four-time St Kilda leading goalkicker.

The 'best of the Dandenong Stingrays' side: