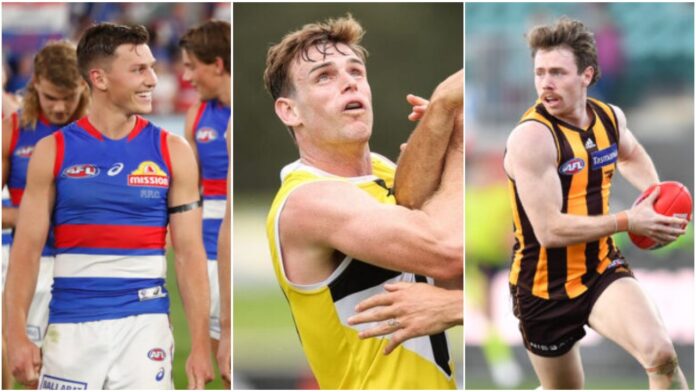 The Pre-Season Supplemental Selection Period is officially closed for 2022, with clubs looking having looked to fill open list spots with talent outside of the top flight.

Whether it be from state leagues, recent delistings, missed draft prospects or former AFL players looking to rekindle their career in the league, several clubs signed players hoping for a chance in the league.

Those that were selected through the SSP last year have either been able to impress at AFL level, show promising signs in their development or fail to land a new deal for another season.

Across the 12 players selected through the 2021 SSP, 10 currently remain on an AFL list, while only three players failed to feature in the league that season.

We take a look at the dozen SSP selections of yesteryear and how their career has progressed since.

The Glenelg product was selected as a long-term talent for Ben Rutten's squad, with the Bombers taking a conservative approach with the teenager.

By all reports, Baldwin has continued to impress at training since venturing to Tullamarine, and was awarded with a new one-year rookie extension last August.

Made his first appearance as a Bomber during match simulation including Suns and Swans players late into 2021 after being nursed back from a pair of ACL injuries, booting two goals and adding a strong presence in attack.

Will be looking to make his senior debut this season, but comes up against Peter Wright and Harry Jones for first-team key-forward spots.

Arguably the pick of the bunch, the Hawks were among several sides to select players from within their own reserves contingent as Bramble staked his claim for AFL level with spells at Box Hill, Williamstown and in the Ballarat Football League.

Making his debut in Round 14 against Essendon, Bramble played all 10 remaining games for the Hawks in solidifying his place on the flank under Alastair Clarkson.

Will be another key cog in the Hawks' season ahead, with Mitchell looking to build the foundations of his list as Hawthorn begin to steer themselves back towards finals contention.

The 2021 SSP selection of Majak Daw was another stunning chapter in the former Kangaroo's AFL career.

After being hospitalised in 2018 after suffering severe pelvic and hip injuries, Daw made his top-flight comeback two years later before being let go by North Melbourne.

Following his move to Northern Football League side North Heidelberg, Daw's AFL dream was rekindled when he was handed a training opportunity with the Demons, where he impressed and earned a subsequent list spot.

Despite not featuring in the Demons' AFL side last season, 2022 frames as a year Daw will be hoping to impress senior coach Simon Goodwin, as Melbourne begin their premiership defence.

The past three years have been quite the ride for Eggmolesse-Smith, having made his debut in 2019 before being delisted twice.

At the end of the 2020 season, the Wentworth product wasn't offered a new deal at Punt Road despite an impressive second season.

The Tigers decided to keep the 23-year-old as part of their training program for the 2021 pre-season, with Eggmolesse-Smith earning a recall to Damien Hardwick's side through the SSP.

The dashing defender made one further appearance for Richmond before being delisted for the second time in 12 months.

The nine-gamer Richmond backman has since signed with Collingwood's VFL side.

Hunter was a highly-touted addition to the Saints' optimistic pre-season of 2021, with the former Crows ruckman adding to the list of promising South Australian talent at Moorabbin.

The 28-year-old was an immediate feature for the Saints, playing in their opening two matches of the season, where he struggled to get the better of Giants debutant Matt Flynn and Demons skipper Max Gawn.

Hunter played a further five matches for the year before being delisted, with the Saints adding Max Heath, Oscar Adams and former Roos tall Tom Campbell to their ruck pecking order throughout the year.

After departing the Saints, Hunter opted to remain in Victoria in signing with VFL side Port Melbourne.

Mansell joins the aforementioned Eggmolesse-Smith in adding to the Tigers' ageing defensive unit, having impressed in his young career with SANFL club Woodville-West Torrens.

Mansell tallied a total of 13 matches in the yellow and black last year, making his debut against Port Adelaide in Round 4 and featuring in six-straight games for the Tigers.

The 21-year-old would return to Damien Hardwick's lineup in Round 15 as a medical sub before enjoying a strong run of form in the latter half of the season.

The glimpses of poise saw Mansell handed a new contract until the end of the 2023 season.

With the Tigers' backline undergoing a revamp, Mansell frames as a strong consideration for Round 1.

The key-position defender gained interest from the Blues after ending his 84-game career with Melbourne at the end of the 2020 season.

Carlton looked to utilise McDonald at either end of the ground throughout his three appearances in navy blue before suffering a back injury.

After returning midway through the season, McDonald remained out of the selection frame for the remainder of the season.

Despite the setbacks in his first season at Ikon Park, McDonald penned a new one-year deal to remain with Carlton in 2022.

Following the departure of Liam Jones late last year, McDonald is among the tall defenders who could step into the void down back under Michael Voss.

Murray forged an impressive debut season at West Lakes after making the move across the border from Williamstown early last year.

Seen as a skilled and versatile defender, Murray added great support to the injury-riddled back-third at the Crows.

The 21-year-old played 13 matches under Matthew Nicks in 2021, adding plenty of service in defence.

With Jake Kelly and Daniel Talia having departed in the off-season, Murray firms as a likely selection for Round 1 next month.

Having played 21 games for a grand final-finishing side, it's hard to suggest any SSP selection enjoyed their 2021 campaign more than Anthony Scott.

Having joined the ongoing list of Footscray players to gain a promotion to the AFL at Whitten Oval over the years, Scott quickly cemented his place in Luke Beveridge's side to make his debut in Round 1.

Scott played the opening 10 games of the season as a reliable utility for the Bulldogs before adding another nine-game run between rounds 14-22 in his maiden campaign.

Was among the unlucky few to be placed on the fringe of the Bulldogs' premiership push, having only featured in the preliminary final win over Port Adelaide as a medical sub.

Scott was another SSP addition to land a contract extension last year, signing a new two-year deal in August.

Smith joined the Demons via the SSP after graduating from their Next Generation Academy and dazzling for the Dandenong Stingrays in the NAB League.

Found first-team selection hard to come by given the stunning season Melbourne conjured in 2021, playing seven games with the Casey Demons in his first year at the club.

Smith averaged 14.2 disposals, four marks and 2.6 tackles per game as an outside midfielder for Casey.

Will be looking to continue his development with the Demons in 2022 in hope of making his AFL debut.

After a luckless run with West Coast and a stellar 2020 campaign in the WAFL with Claremont, Waterman returned to the AFL landscape with the Bombers for the 2021 season.

The 25-year-old featured as a trialist in Essendon's pre-season clash with Carlton at Ikon Park last year, booting four goals in an impressive dress rehearsal for the medium-sized forward.

17 goals for the year saw Waterman land fifth in Essendon's goalscoring tally, with his reliance sure to rise in 2022 following the retirement of Cale Hooker and the indefinite absence of Anthony-McDonald Tipungwuti.

After ending his 65-game spell at Arden Street, Wood was handed a career lifeline with the Saints as they looked to build on their impressive 2020 campaign.

Wood featured in St Kilda's opening match of the season before facing injury setbacks and sporadic selection to amass nine appearances and seven goals for the year.

Having shown potential at North Melbourne, St Kilda will be hoping to unlock Wood's best in his second year at the club as they plan to steer themselves back toward finals contention.