Fitzpatrick announced he will step down from his role in a press conference yesterday.

His decision was met with mixed reaction, with some labelling his tenure a success, but others celebrating his departure.

It started when the news was announced yesterday. 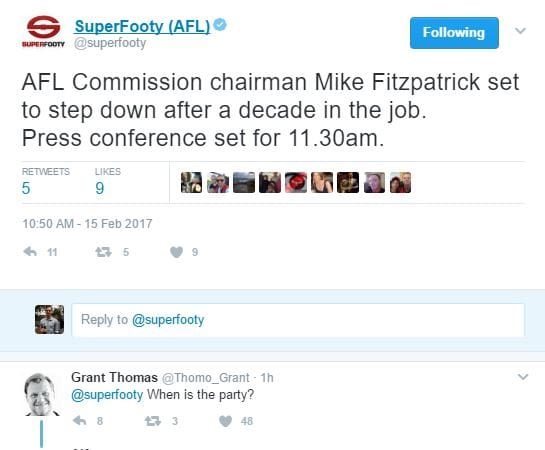 Then when the press conference started, Thomas poked fun at Fitzpatrick.

“Richard is very thorough and he doesn’t deal with fools lightly,” Fitzpatrick said.As distinct from himself who comfortably tolerates fools

Then Fitzpatrick spoke on some of the bigger issues he has overseen while in charge of the commission. They include:

What is it?! Does AFL senior execs have mandate not to acknowledge any responsibility for anything bad? Where is the humility, honour, grace

Has there never, ever been a poor decision or badly executed strategy in the history of AFL. Think about it. They could do nothing better?!

Gill says "The tougher things are the better Mike goes". Referring to Fitzpatrick. Things must not have been very tough then.

Seems to me every inevitable success was due to Fitzpatrick & every failure or issue was all care no responsibility – someone else's fault.

Then he gave one to Caroline Wilson for good measure.

Caroline Wilson says Goddard's tweet to Fitzpatrick was idiotic! What hope has public got when senior journo's are so easily seduced by AFL

He wasn’t the only one to have a go at the outgoing AFL Chairman. 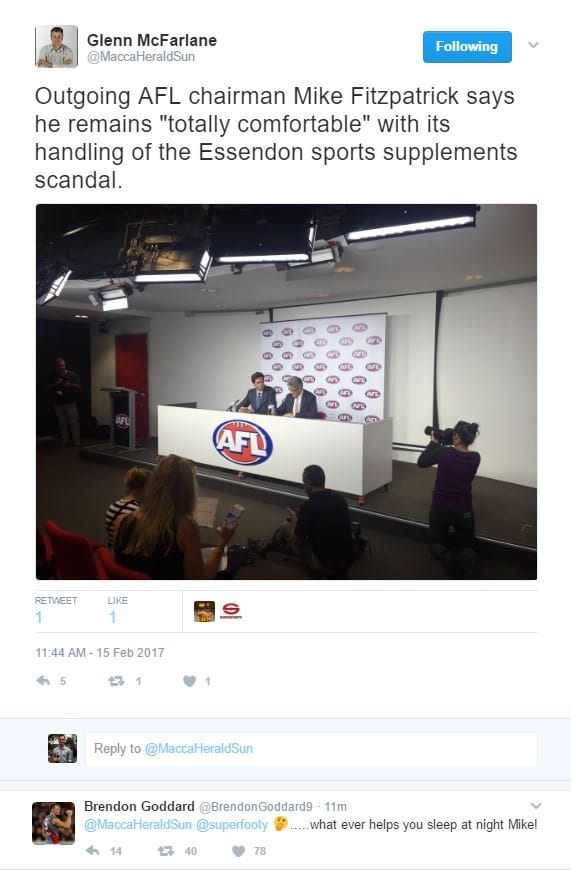 AFL Chair Mike Fitzpatrick retiring. Will be remembered for the smooth way he handled the Essendon supplements saga.