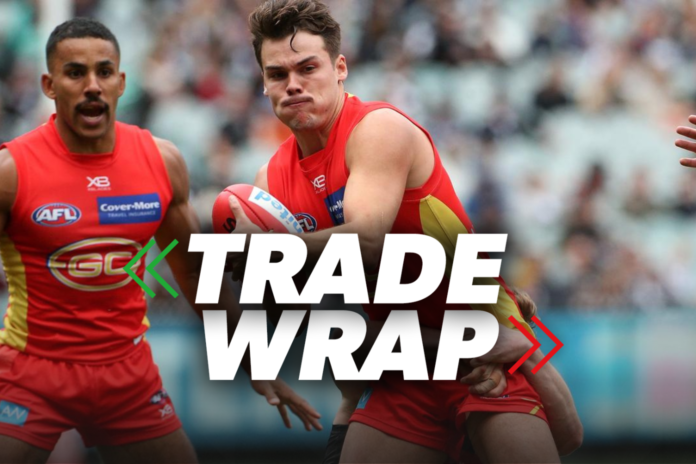 Day three of the 2022 AFL trade period has officially concluded, with three players finding a new home for the 2023 season.

Plenty of pick swaps were made throughout the day's business, while talks on a host of wantaway players continued to progress.

Here's your daily wrap from day three of the trade period.

In-demand Sun Jack Bowes has reportedly indicated that he would like to be traded to Geelong after a host of clubs showed interest in the 24-year-old, per AFL.com.au's Cal Twomey.

The Cats will gain Bowes and Gold Coast's Pick 7 in this year's National Draft in exchange for a likely later-round selection as the Suns try to ease some pressure on their salary cap, with Bowes reportedly on a salary of around $1.5 million over two seasons.

Essendon, St Kilda, Brisbane and Hawthorn were also keen on the young Sun, with Bowes meeting with both the Bombers and Hawks before making his decision.

Fremantle have traded Griffin Logue and Darcy Tucker to North Melbourne, with pick swaps aplenty between the two clubs.

North have received the two players alongside Fremantle's future third-round selection. While the Dockers have received second, third and fourth-round 2023 selections in exchange.

Brisbane and GWS have agreed to a pick swap that will see Pick 15 for this year's National Draft land with the Giants.

While being seen as a potential part in the Power's plans to secure wantaway North Melbourne young gun Jason Horne-Francis this trade period, Port Adelaide's Riley Bonner hasn't met with the Roos despite reports from earlier this week.

According to a report from 9 News Adelaide, Bonner, who is contracted for 2023, is open to a move to Arden Street.

However, Bonner's manager Dave Trotter revealed on Trade Radio on Wednesday that his client and the Kangaroos are yet to have met, despite reports suggesting the two parties were in discussions.

St Kilda and Gold Coast have reportedly hit a snag in their negotiations over Ben Long.

Long requested a trade north last month, keen to join the Suns after six years with the Saints, with the two clubs originally hopeful of facilitating a trade for the 25-year-old.

Now, negotiations have reportedly slowed with the Saints hoping to receive a higher draft pick in exchange for Long. Per The Age, the Saints were keen on snagging pick 25 from the Suns, who are keen to part with a pick no earlier than pick 36.

Fringe Blues Will Setterfield and Paddy Dow are continuing to assess their options amidst a busy trade period for Carlton.

Carlton has expressed interest in retaining Setterfield but have agreed to assist Dow in finding a new opportunity, according to list management boss Nick Austin.

"It is still pretty early, we are in discussions at the moment, he (Dow) has got some talent as a footballer," Austin told AFL Trade Radio.

"AFL opportunities at Carlton for Paddy have dried up. We have agreed to try and help him get an opportunity."

The Dockers farewelled both Griffin Logue and Darcy Tucker on Wednesday, but are playing hardball on Lobb and Meek.

Lobb has expressed his desire for a trade to the Western Bulldogs, while Meek has been linked to several Victorian clubs.

“It's interesting to hear Hawthorn have expressed an interest in Lloyd as a contracted player,” Bell said to fremantlefc.com.au

“We think he has improved massively this year, and every year he's been at the Club. He's really important for our future plans.

“We're really eager to retain Lloyd. As I mentioned before, he is contracted and a valued member of our team.”

Zaine Cordy is officially a Saint, making the move to Moorabbin from the Western Bulldogs on Wednesday morning as an unrestricted free agent.

Cordy played 118 games for the Bulldogs since his debut back in 2015, including 2016's premiership win.

The 25-year-old has signed a three-year deal with the Saints after reportedly rejecting a two-year offer from the Bulldogs, who will not receive compensation from the deal.

Former Carlton defender Ciarán Byrne has turned his back on a potential AFL return, instead opting to remain in Ireland to continue his Gaelic football career.

Byrne, who played 22 games for Carlton across a five-year period with the club, was floated as a potential target for AFL sides ahead of 2023, with the 27-year-old having weighed up a return down under in recent months.

The Blues were named as an interested suitor for the flanker as part of a potential return to Princes Park, but Byrne has now decided to remain with Gaelic club St Mochta's and County side Louth in a move labelled as a "no brainer".

"It came down to what means more to me," Byrne told RTÉ Sport.