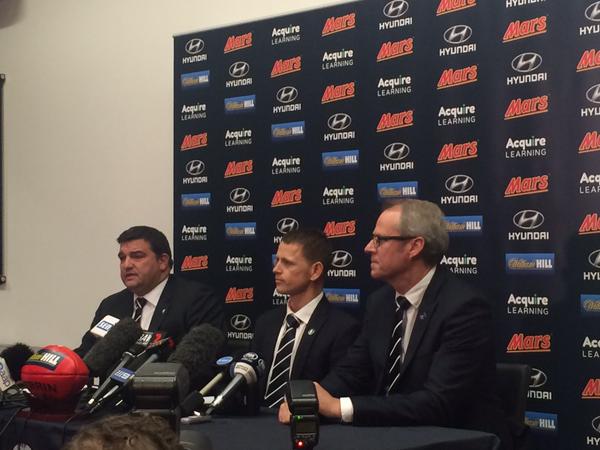 Hawthorn assistant coach Brendon Bolton has been officially unveiled by the Blues as their new head coach at a press conference this afternoon.

Both CEO Steven Trigg and president Mark LoGiudice started by thanking interim coach John Barker on his effort during a difficult situation.

“John Barker has done a mighty job. He has always kept a team-first, club-first mentality,” he said.

Trigg also said that Bolton’s contract is not a normal one for an AFL coach, but instead he will be employed on a normal staff basis.

Bolton said that he is excited about the challenges that lie ahead.

“I am genuinely excited by the role,” he said.

“I want to establish a sustained platform of success. I’m not going to put a timeframe on it.

“I’ve invested in my professional development over the last few years. When I started it was just a dream to be an AFL coach.

“I’ve been a lifelong learner, and if I continue to do that, then hopefully I will go well in the role.”

The 36-year-old said he was impressed with the club during the interview process.

“The way I see Carlton is as a thorough club. I saw that in the process of the new coach selection.

“The interviews with Carlton were very transparent. I asked many questions.”

Bolton said he will finalize his departure from Hawthorn in the next few days and that Damien Carroll will step into the assistant coaching role vacated by Bolton.