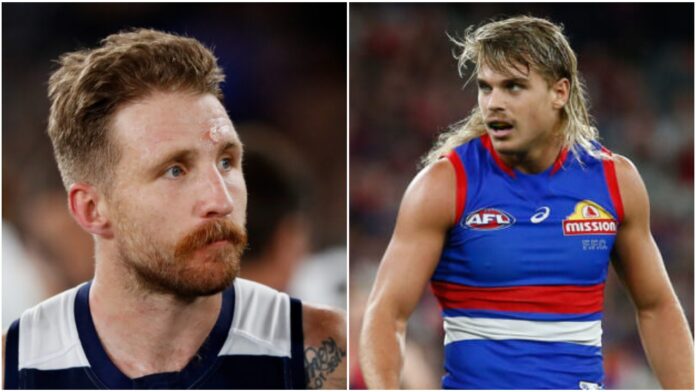 At the three-quarter-time break of the Cats' 13-point win at Marvel Stadium on Friday night, a melee between Bulldogs and Geelong players broke out, seeing Smith and Tuohy come to blows.

The altercation saw the pair holding each other by the jumper as teammates swarmed, with what appeared to be a headbutt from Smith leaving Tuohy holding his face.

The action sparked further tensions between the two sides, with Smith placed on report for his actions.

The Dogs' ball magnet could face multiple weeks on the sidelines through suspension, with the MRO set to announce any charges from the match on Saturday evening.

Should the MRO deem the incident as intentional conduct, low impact and high contact, Smith will be handed a one-game ban.

After gaining some medical treatment, Tuohy was able to play out the final quarter of the match, and even played down the altercation with Smith post-game.

“Emotions were obviously getting the better of both of us,” he told Fox Footy.

“I was pulling and dragging at him as much as he was me so there was not much in it.

"When the game gets so close and given we had such a big lead cut back to a small margin, emotions get high so there was all love at the end.”

Even a one-game suspension would see Smith out until Round 15, with the Bulldogs scheduled to have their bye next week before travelling to GIANTS Stadium to face GWS on June 18 for their Round 14 encounter.

Tuohy may also come under scrutiny by the MRO for his involvement in the fracas, however is unlikely to be handed anything more than a sanction.

The thrilling win sees Geelong claim their eighth victory of the season, currently sitting in fourth place on the ladder.

The Bulldogs now face the chance of falling out of the top eight should Collingwood defeat Hawthorn at the MCG on Sunday.