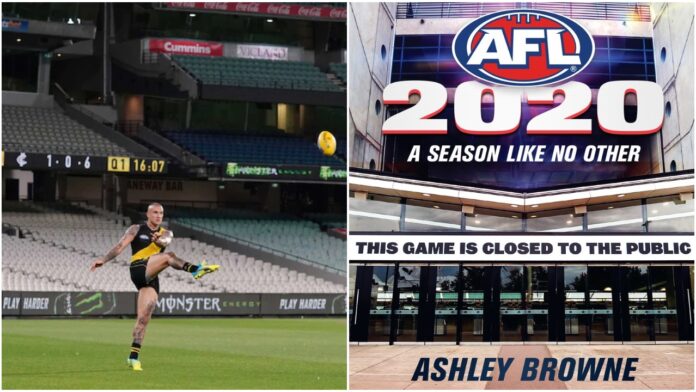 With a condensed regular season following a lengthy hiatus, low-to-no attendances (in some cases), shortened quarters and a decider played nearly 1,800 kilometres north of the MCG’s hallowed turf, 2020 was without doubt, the strangest season in the competition’s 125-year history.

Although any mention of these aforesaid factors would have been enough to send purists into a tailspin as they hung their new calendars just 18-months ago, it was the necessary implementation of hubs that had footy fans vexed until the end of last October.

At the time, many muffled questions were raised by punters from behind their medical masks, and even though skerricks of information were passed though and consumed greedily, the entirety of the narrative – like the players in their bubbles - remained hidden under lock and key.

With nearly three-decades of experience covering the game from all angles, there was perhaps nobody more qualified to lift the lid on what went on behind closed doors than Ashley Browne.

Across 233-pages and 30-chapters of Browne’s titanic work, footy fans who last year were left to their own devices - and often forced to piece together the narrative themselves - finally have the answers they so crave.

Due to his role as the senior writer of the AFL Record, Browne has built a Teledex of impressive contacts over the years, and in his search to document ‘a season like no other,’ called in all of his favours.

A thrill today to hand over a couple of copies of the book for safekeeping to the holy of holies, @MelbCCLibrary. @HardieGrant pic.twitter.com/c6GIhVmkMa

From the season launch and Round 1 with no crowds, to the league's eventual resumption, Browne's book - as the title claims - touches on all the elements of a season dissimilar from any before it.

With anecdotes that range from somewhat ridiculous to utterly unforgettable, one of the latter looks at the breadth of stand downs, terminations and furloughs within the entire industry - and the speed in which they were forced to take place - such as the tale of former North Melbourne Events Manager, Gina Cimarosti:

"In the middle of March, she attended the AFL's season launch and heard Gillon McLachlan forecast that no matter what, footy would be played and that crowds would be there. "Literally a week later I was stood down, most of the AFL staff was stood down and the footy was cancelled after one game. It was unbelievable.""

SEE ALSO: Every club's greatest 'what if' moment of the AFL era - Part One

Fans of every creed will also hear from league boss, Gillon McLachlan, his offsider, Richard Goyder, as well as a smattering of players and officials from club land, about how the season became a mission... and how the mission was completed.

Perhaps the most interesting revelation came when McLachlan recalled the relative speed at which the Queensland state premier, Annastacia Palaszczuk, agreed to play the role of the code’s saviour.

Having spoken with the league boss, Browne quoted McLachlan about the act of salvation.

"I told her (Palaszczuk) how we'd been tossed out of places and how I thought it would work. She was great and asked a few questions, like would they get the Grand Final. I told her we still had a contract to play it in Victoria, but if we weren't able to fulfil that for whatever reason then I'm sure the Gabba would be right in the running. And with that she said, 'That's great. Let's do this. Can I announce it in Parliament in the next hour?' I said 'Yeah', so she went and did that while I started speaking to the Commission and the clubs."

It is clear that Browne – a long-term Hawthorn fan – has written this almanac of sorts as a conduit between his professional peers and those he shares the grandstand with on weekends.

Browne’s ability to patiently collate information from his position akin to the proverbial fly on the wall, has his opus sitting alongside Martin Flanagan’s revealing 1994 work ‘Southern Sky Western Oval’ and John Powers’ 1978 classic, ‘The Coach,’ in that he manages to pass through the perpetually guarded doors of footy clubs and into their inner sanctum.

SEE ALSO: Every club's biggest 'what if' moment of the AFL era - Part Two

Yet, as this contemporary work stretches far beyond the board and changerooms of a singular club, at a singular location, it would be more accurate to call it an in-depth, written companion to the Amazon documentary series, ‘Marking their Mark’.

As the book covers a full season – albeit the most unorthodox one – from start to finish, the aforesaid 30-chapters act as a chronologically ordered tour from February through to October, with primary sources acting as the lure for the reader’s eye.

Due to the extraordinary detail required to properly tell the tale of these separate incidents, accidents and narrow escapes, these chapters act almost as a miniature essays. However, if this thought is one that has your eyes glazing over with boredom, think again. You will be thankful to know that Browne expertly moves things along like a nippy half-back flanker.

In a year where the news cycle never remained stagnant for long - despite individuals being forced to remain perpetually stationary - Browne’s prose runs through the - at times - torturous calendar at a pace that would win the Grand Final sprint, yet still allows us 'mug punters' a chance to see the sights along the way.

As the dust has only just settled on the 2020 season, readers will need little more than a nudge to jog their memories of the events that Browne reels off.

Nevertheless, once the final page is turned, these same bibliophiles will have a much firmer understanding of just how precarious the state of the game was through 2020, and just how hard so many fought to keep the scoreboard, and in some cases the turnstiles, ticking over.

The true strength of Browne’s latest publication is that it provides those that were previously kept in the dark with answers. Not many texts can do this – unless of course they are written by Webster or Roget.

From Dylan Grimes' solo struggles, to the birth of Jarryn Geary's son while in the Saints Noosa hub, this guide is laden with spellbinding segments that are expertly woven to create a vivid tapestry.

The only possible gripe I have with 'AFL 2020 – A Season Like No Other' is that as a fellow footy nerd that loves to read and write about our indigenous code, the pages of Browne’s creation weren’t littered with footnotes and avenues for further reading.

However, as the tome flows fantastically, their omission does make sense in terms of pacing.

Even so, perhaps a catalogue of endnotes would have been nice.

SEE ALSO: Every club's biggest 'what if' of the AFL era - Part Three

With Australians once again subject to capped crowds and the potential for further hubs, it may seem an inopportune time to curl up and dive into the aches of the recent past.

Still, when the heart strings can take it, those that waited will be provided with an informative portal back to a time when none of us had any answers, but plenty of time and sourdough at our collective disposal.

Although there will be many people across our sunburnt country that are currently begging for a 'Men In Black" form of memory erasure for the entirety of the 2020 calendar, if you are in fact able to complete this sci-fi procedure, I would suggest owning a copy of Browne’s brilliantly written recap, just in case you do have buyer’s remorse down the track.

You can purchase a copy of Ashley Browne’s 'A Season Like No Other: AFL 2020' directly from publishers Hardie Grant or at any good bookstore.