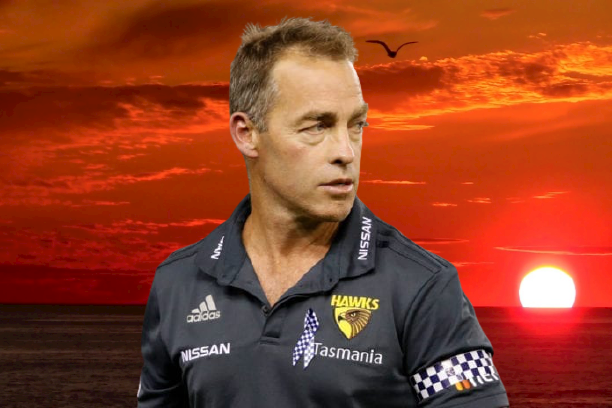 This week saw Hawthorn president Jeff Kennett take to the airwaves and declare the Hawks would go to the draft in an attempt to reload for a tilt at the finals again in two years' time.

This prompted a wave of response from many in the football fraternity who believe the club is in a hole and are a decade away from challenging for a flag, a view that, quite frankly, seems to be slightly over the top....here is why.

Having the best coach of the modern era, a man who's constantly innovating and evolving, incredible at developing young talent and creating a culture that brings the best out of all at the club, is a great place to start.

Alistair Clarkson has proved his credentials time and again. His career started with a rebuild, so it would be a stretch to think he couldn't do it again.

In fact, an argument could be made that Clarkson has rebuilt the club twice already, having won the 2008 premiership, he allowed veterans like Campbell Brown, Chance Bateman and Mark Williams to leave or be traded, while bringing in the likes of Josh Gibson, David Hale, Shaun Burgoyne, Jack Gunston and Brian Lake.

He then went on to draft Luke Breust, Paul Puopolo, Ben Statton, Liam Shiels, Isaac Smith and Brad Hill, so it's it's not beyond him to adapt and continue to evolve when he feels he needs to.

Sam Mitchell might be impressing at VFL level, but we all know there's a huge step up to the top, so it's probably best to let him develop.

Hawthorn are a club with an excellent football department, a huge fan base that are loyal, great resources and facilities (they're new facility at Dingley promises to be among the competition's best. And most importantly of all, a winning culture. An average of a flag every four years (4.09090909 to be exact) since 1976 would suggest they know how to get back to the top.

A lot of the discussion around the Hawks has centered on their current playing group, however, a closer look would suggest that it's not as bad as many think. Looking at players who could still be playing good footy in five years time reveals plenty.

Throw in what appears to be a very decent crop from last year's draft in Denver Grainger-Barras, Connor Downie and Tyler Brockman and it looks as though 'the rebuild' is already well underway.

As revealed by Tom Morris on Fox Sports this week, the Hawks are one of the four clubs with the most salary cap space in the competition, meaning an attack on free agency is very likely this year and next.

They could potentially grab one or two 21-year-olds and accelerate things further. This year sees a stacked free agency pool, with several players who could fit the right age profile.

Adam Cerra is certainly one who might appeal, while established stars Zach Merrett, Jack Billings and Josh Kelly are others, players who are around the age of 25 and would still be playing well come the next finals push.

These are guys who could also provide valuable experience and leadership to the youngsters coming in to the club.

This year there's a huge chance they'll have a selection in the top five, if not top three, while it looks likely they'll end up having three picks in the top 25 (one is a second-rounder tied to the Pies).

The Hawks generally don't like to go to the draft, however, last time they did it properly, they drafted a core group of players that, when ably lead by hardened veterans like Shane Crawford, Campbell Brown and Richie Vandenberg, won a surprise flag in 2008. Before Clarkson again made key list changes.

That's not to say Hawthorn will draft a Luke Hodge, Buddy Franklin or Jarryd Roughead this time around, it's just pointing out that access to top five draft picks gives you the greatest chance of unearthing your next club greats.

An another thing to consider is that there are players on the current list that could serve as trade bait, for example, Jack Gunston or Chad Wingard, who could appeal to the right suitor, and land the Hawks a decent draft pick.

The key is to gather enough quality picks while not trading away all of your experience, as the Saints did over the course of a couple of years when trading Ben McEvoy, Brendon Goddard and Nick Dal Santo, which left them short on leadership and a long stint in the wilderness.

Never as bad as it seems

The very nature of the AFL is to equalise things as quickly as possible. The league doesn't want clubs sitting near the bottom for a decade, hence the heavy emphasis on soft caps for off-field spending and easier fixtures for clubs who finish towards the bottom.

There are a few recent examples of clubs who seemed miles away from challenging, only for them to bounce back quickly. Melbourne are an example - the Dees finished bottom three two years ago (albeit it a year after making a prelim), which allowed them to draft Luke Jackson and Kysaiah Pickett, they will now almost certainly make finals.

Richmond are perhaps the best example. They looked shot in 2016 and as though their drafting hadn't worked. Fast forward five years and they're the benchmark of the comp with three premierships to show for it.

As always in footy, you could probably make an argument for either side of any topic. However, this week's negativity surrounding Hawthorn seemed to be more about making headlines than actual reason and common sense.

After so long at the top, the Hawks have slid down the ladder, but with their track record over the last 40 years, there's definitely a case to be made in favour of Kennett's comments. Things change quickly in footy and as the old saying goes, "it's never as good as it looks and never as bad as it seems."