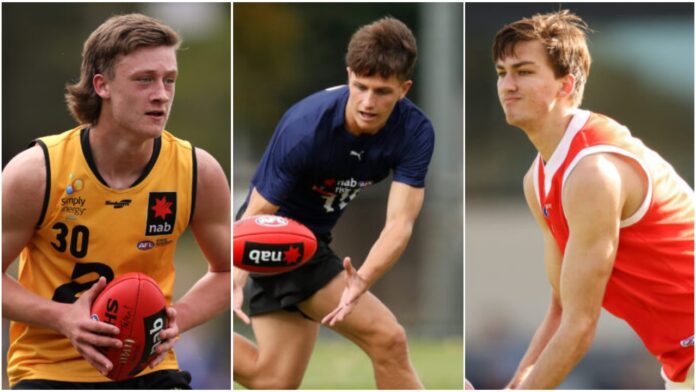 Whether your club holds multiple first-round selections, is hoping to increase on their first pick or just wants to gain a selection for the opening night of the draft, there are top talents for every side.

With the National Draft nearing and all 18 clubs continuing to contact prospects, we identify the best names in this year's draft class that would best suit each side.

The Crows may look toward the hard-nosed midfielder with their top selection at Pick 4, with Hobbs also not needing to travel too far when hopping across the VIC-SA border from country-town Horsham.

With father-son selections likely pushing Adelaide's first selection back to Pick 6, Hobbs may be the best onballer on offer should the Crows be looking to bolster their engine room.

The Lions seem to have solid key-position stocks at either end of the ground, however their depth has been questioned at times.

While Harris Andrews and Joe Daniher are seen as the polar pillars at Brisbane, the Lions could look to bolster their tall depths with the selection of van Rooyen, who proves to be the best swingman on offer in his draft class.

Capable of as a tall defender and a target in attack, van Rooyen could also aid the Lions' finals woes, having booted eleven goals in three finals for Claremont's Colts.

The Blues' focus for next season will no doubt be set on returning to the September action, and to do so they may need to strengthen the 'bottom six' of their best 22-man side.

Carlton cycled through 39 players in 2021 and will be looking to stabilise their squad, with Wilmot able to hold a role in defence with his reliable ability to lock down forwards and move the ball forward to ignite a transition.

Following the departure of Sam Petrevski-Seton and the uncertainty surrounding Sam Docherty's 2022 prospects, Wilmot would be seen as a capable asset for the Blues.

The father-son selection warrants this link, however the idea of Daicos being the face of the Magpies' rebuild and Craig McRae's era at the Holden Centre is also an enticing concept.

Collingwood will be looking to put the past 12 months behind them as they embark on an exciting clean-slate, with welcoming a familiar name and arguably the best player in the draft a good start.

With expectations even lower for 2022, expect the Magpies to inject Daicos into their midfield early, and don't be too surprised with what he can offer in return.

The Bombers' area of interest in likely to be in attack, having solved their midfield woes and bolstering their defensive unit this year.

Arguably the best medium-sized prospect in the draft, Rachele would add a mercurial edge to Ben Rutten's forward line, boasting flashy skills in front of goal while also being capable of impacting the game further up the ground.

Adding Rachele to an attack with Jake Stringer and Anthony McDonald-Tipungwuti would be sure to leave opposition defenders with headaches.

There's no question the Dockers have been calling out for a tall forward to pair with Matt Taberner and ease the workload of Nat Fyfe down forward, and Amiss frames as the perfect piece to Fremantle's finals puzzle.

A Western Australian product, Amiss could be picked up with either of the Dockers' top 10- picks as he firms as the best key-forward option outside of Dogs father-son selection Sam Darcy.

Booted 51 goals in 15 games for the East Perth, kicking at an impressive rate of 77 per cent conversion when shooting for goal this season.

While youth is a vocal requirement for the Cats, it can be hard to identify just exactly where on the field Geelong should look to add to.

With Goater, the Cats would be gaining a midfielder capable of being utilised across all three lines.

Having lost Jordan Clark to the Dockers, the Cats could look toward this defender/midfielder utility at the National Draft.

The Suns may hold just the one pick at the draft and could look toward Greater Western Victoria star Josh Gibcus with their sole selection at Pick 3.

Undoubtedly seen as the best key defender in his class, Gibcus would be a fitting selection for the Suns as they need to add height to their backline stocks.

The Giants have constantly dealt with holes in their forward line and this will be no different in the future, with superstar Toby Greene facing the opening month of next season on the sidelines and Bobby Hill's future in New South Wales unlikely to last past 2022.

With this in mind, the Giants could look to highly-rated forward Neil Erasmus, who has proven to have a keen eye in front of goal and is capable of moving into the midfield if required.

Having a ceiling as high as any prospect, the Giants could follow their recent history of cementing a top selection in Erasmus as a bonafide star of the game for the years to come.

The Hawks are looking to add the best talent on offer at this years' National Draft, holding Pick 5 as their opening selection.

The Victorian club have been touted as a potential mover up the draft board and may do so to land Callaghan's services, with the talented teenager seen as the 'best of the rest after the imminent selections of Jason Horne-Francis, Nick Daicos and Sam Darcy.

Offering plenty of run and promise as an outside midfielder, Callaghan would add to an already star-studded midfield group of Tom Mitchell, Jaeger O'Meara and James Worpel in being their wider outlet option.

The Eastern Ranges star has battled injuries in the build-up to the draft, with a place at Gosch's Paddock perhaps exactly the kind of rest and recovery required to reach his greatest potential.

The Demons relied on the second least amount of players this season on their way to a drought-breaking premiership win, with Sonsie's selection likely to see the teenager given time to develop with the competition's top side in his first year in the system.

Should the Demons' lucky injury run come to an end next year, they will have an emerging gun midfielder to rely on in their depths.

The Roos are among the several sides in the midst of a rebuild and will be able to swoop on the best player in the draft to aid their ambition to work back towards premiership contention.

Horne-Francis will add further explosive elements to the Kangaroos' engine room immediately, with the South Adelaide star a ready-made prospect for David Noble to utilise.

With plenty of promising names already culminating the mouth-watering young midfield at Arden Street, Horne-Francis is sure to lead the charge in the years to come.

A somewhat obvious selection for the Power given Draper's local link, the midfield-forward prospect could be seen as the heir to club-favourite Robbie Gray.

Proving to be a lethal option in attack for the Panthers and South Australia, Draper would be feeling right at home at Alberton Oval next season and could even be a cog in the Power's hopes of landing a second AFL premiership next year.

The Tigers will carry one of the strongest draft hands into this month's count following a bust trade period and a finish outside of the top eight in 2021.

A factor for their 4,865 draft points total comes from the departures of Mabior Chol and Callum Coleman-Jones this off-season, with the pair leaving large voids in both Richmond's attack and youthful stocks.

Should they be looking to bolstering both areas with their first selection at Pick 7, the Tigers' best option would be Melbourne NGA talent Mac Andrew, who is capable of playing in the ruck and as a key-forward target.

With Jack Riewoldt into the twilight of his career and ruck duo Ivan Soldo and Toby Nankervis battling injuries this year, Andrew would be an enticing selection for the Punt Road club.

With midfield and attacking options set to be filled with their later NGA selections in Mitchito Owens and Marcus Windhager, the Saints could look to bolster their defence at Pick 9.

Seen as the premium medium-sized defender in his class, Sandringham's Josh Sinn would add plenty of attack from the back for Brett Ratten's side.

With Hunter Clark likely eyeing more midfield minutes in 2022, Sinn could slot straight into a half-back role in his debut campaign at Moorabbin.

The loss of Jordan Dawson is set to open up a hole in the Swans' wings, with the likes of Braeden Campbell and Justin McInerney looking to share the workload against the league's best.

Should John Longmire's be hoping to add more speed and power out wide, no option will be greater than Wanganeen-Milera for the Bloods, with the Glenelg talent seen as arguably the best kick in his class.

2021 was a pleasant eye-opener for Sydney, and Wanganeen-Milera may just be the surprise packet of the National Draft.

A local selection for the Eagles, Johnson would add much-needed youth to West Coast's engine room.

Seen as a future leader of the league, Johnson is sure to add plenty of professionalism and poise, and could be in the Eagles' sights at Pick 10.

An accurate mover of the ball and a threat in the air given his height, Johnson claimed the best afield honours for the Black Swans in Western Australia's win over South Australia in the 2021 AFL Grand Final curtain-raiser.

Having landed 2020 No.1 Pick Jamarra Ugle-Hagan last year, a key forward may not be the ideal selection for the Dogs, however Darcy's imminent arrival is sure to add great flexibility at Whitten Oval.

With the Bulldogs having battled with other tall defensive stocks in the business end of this year, Darcy could allow swingman Aaron Naughton to move into defence while the likes of Ugle-Hagan, Josh Bruce and Darcy command a lethal attack.

Having also some promise in the ruck this year, Darcy could also be seen as an option to aid the Dogs' ruck issues for the future in a potential partnership with Tim English.