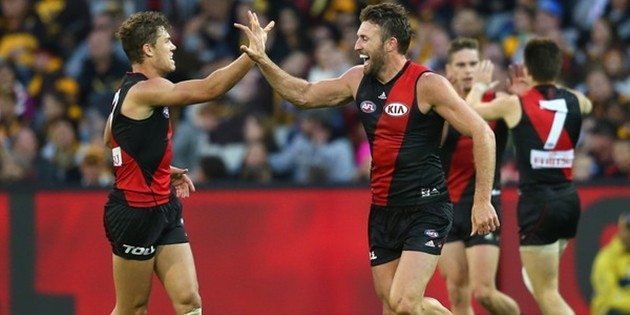 Jordan Lim runs the rule over this week’s Supercoach hidden gems and those you should think about offloading.

Sick of the same Supercoach sites telling you get on board with the same handful of players? Well The Bandwagon takes a look at the unique players that could make an impact, and the popular ones that could face the boot, as you look to get the wheels rolling for Supercoach 2015. Whether you need to take a punt in your league, or are looking for overall glory, don’t take a Paige page out of the same book, jump on board the new Bandwagon.

This week has a defensive theme to it, as we run the rule over the back men that could see heavy movement ahead of the Round Four lockout.

Hooker has been immense in defence for the Bombers and his aerial prowess, large tank and booming kick makes him a dangerous prospect setting up attacks from behind the play. One of the best intercept marks in the league; nine of Hooker’s 29 marks have come contested. Tick, tick and tick! While his Round Two score was heavily boosted by that dramatic late goal against the Hawks, there’s little doubt he’d have tonned up regardless. In only 1.9% of teams, I suspect that’ll be much higher come lockout.

Ask any of my mates and they’ll tell you I’ve been a strong advocate for Pittard over the last couple of seasons. His big problem has always been decision making, and while his clanger figures this year point towards much of the same, there’s little doubt he looks a more assured figure for Port. His high return of miskicks is more of a result of his supreme confidence in taking the game on and attempting high risk kicks. More often than not, it’s paid off for him, and it showed on the weekend, as he was among the best on ground in Port’s win against North Melbourne, for a return of 94 points. Risky pick? Yes, but in a season of slim pickings for mid-pricers, he could well be your man.

Bachar Houli – Richmond ($480,800, av. 113.67)
Must admit, made the amateur decision of not starting the classy half-back in my team this year. Having had him as a permanent fixture for most of the pre-season, I got cold feet and jumped off. Houli 1, Jordan 0. The Tiger has averaged 25 disposals this year, with a strong favouring to his left peg. Uses it well and the Tigs love the ball in his mitts. Went bananas with 32 disposals and 150 SC points on the weekend, which looks to be a sign his ceiling has raised from previous years. Love his scoring consistency also.

An injury to prized recruit James Frawley saw Josh Gibson return to a key position role for the Hawks, and that seriously hurt his scoring output on the weekend. With Frawley’s injury set to keep him out for upwards of a month, don’t expect pre-season numbers from Gibbo, who was allowed the freedom to roam that we also saw in Hawthorn’s Easter Monday win against Geelong. Grant Birchall’s return from injury adds another genuine ball mover off half-back, which makes it even harder to determine Gibson’s role.

Whether to hang onto Newnes is a proper flip of the coin decision. He has shown enough promise floating off half-back for the Saints, and has seen time in the middle of the ground. But his ball usage has killed him this season, averaging just 66.6% disposal efficiency from his 21 touches per game. His 13 clangers (the equal 10th most in the league) is another alarming stat, and his use of the ball needs to improve should he want to get to that 100 average.