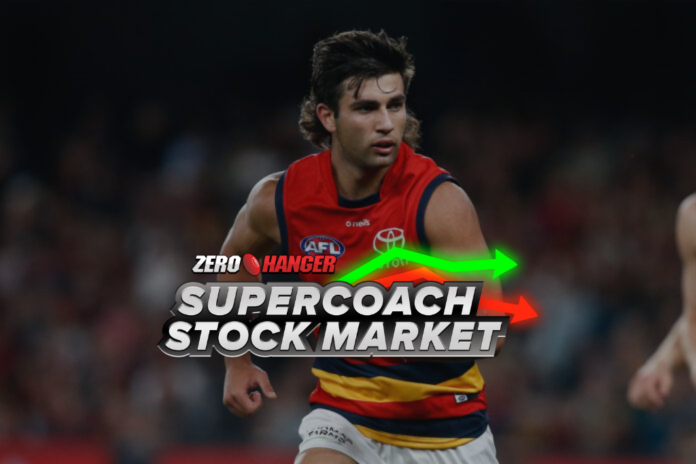 The SuperCoach season is well and truly heating up with some big scores and some big injuries to some popular players throughout the ANZAC round.

Popular ruckmen selections in Brodie Grundy and Jack Hayes were struck down with long-term injuries whilst the first double-ton score of the season was achieved on Monday with star Swan Callum Mills amassing a whopping 214 SuperCoach points.

After an exciting round, it's time to look ahead to next week and see who to buy, hold and sell as Round 7 nears.

The young Port ruckman will find his way into a lot of teams this week after the 23-year old scored 94 SuperCoach points on the weekend, taking his average to 84.5 points per game across the first two games of his career.

He's on the bubble this week, with a breakeven of -97 and a projected price rise of $81.5k, so he won't be this cheap after the next round.

Number one Port ruckman Scott Lycett will miss a majority of the season with a shoulder injury, so Hayes will be the leading tall at the club, proving strong job security for owners that select him this week.

With rookie Jack Hayes going down for the year and Brodie Grundy out for three months, Hayes looms as the perfect ruck downgrade target heading into Round 7.

This will likely change as Witts looks to be the logical trade across for Brodie Grundy owners this weeks, with over 4,000 coaches already making the move and bringing the big ruckman into their side.

Witts currently has a breakeven of 77 and a projected price rise of $10.2k, so at a respectable price now, it'd be wise to hop on.

Mills just put on the best SuperCoach performance of the year so far with a 214-point effort against the Hawks on ANZAC Day.

Mills had 37 disposals, 11 marks, five tackles, nine inside 50's, six clearances, one goal and went at 91% efficiency, which is a very impressive stat line.

The gun Swans midfielder has become one of the best midfielders in the competition but is only in 1.7% of teams.

Now is the best time to get Mills, due to his low breakeven of 36 and projected price rise of $47.8k putting him on track to be the most expensive player in the competition by next round.

If you have the extra cash to fork out for Mills, it would be the perfect point of difference for owners looking to separate themselves from the pack.