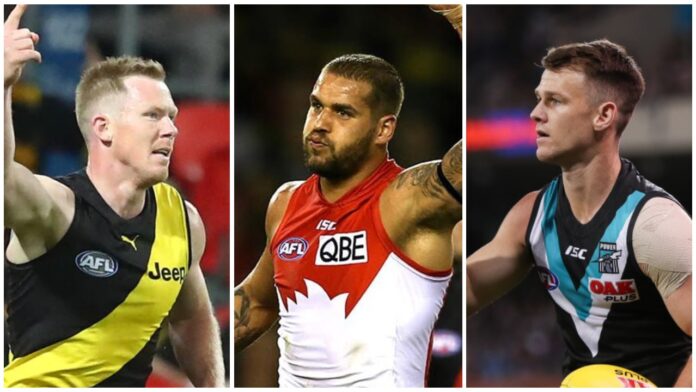 After filing our lists of the league’s best defenders and ruckman in recent weeks, we have finally worked our way to the pointy end of the ground.

With their sharp shooting, big grabs and bags, their defensive counterparts may help win premierships, but the game’s forwards definitely help their employers win memberships.

As their ability to either slot or miss the big sticks can make our break moments, games and seasons, the men that fill the forward 50 have always been under intense scrutiny.

However, for those that delivered from set shots, snaps and dribbles from the boundary, their status as champions has all but been cemented.

SEE ALSO: The 15 best AFL forwards of the century

Despite the fact that some superb footballers have plied their trade within the last 10 years, to earn a place within this catalogue, they must have played at least 100 senior games since the start of 2010.

In addition to this, due to the overwhelming number of candidates that have met our criteria, we found it impossible to fit sublime offensive talents such as Steve Johnson, Luke Bruest, Mark LeCras and Taylor Walker in.

Without further ado, here are the 10 names that have been more than handy in the forward half since 2010.

Despite the fact that he is arguably the Saint’s second greatest ever forward, Nick Riewoldt enters our list in 10th position.

With St. Kilda’s form on the field falling away drastically after their Grand Final replay against Collingwood in 2010, Riewoldt was often left to play a lone hand inside 50 for the Moorabbin men.

Although the red, white and black spearhead averaged more than two goals per game across the decade, it was his ability to haul in an aggregate of 1,104 marks - at an average of 7.1 per game - that sees the Tassie titan earn a spot in our catalogue.

Across his 154-games from 2010 until 2017, Riewoldt earned All-Australian honours in 2014 and his sixth club best and fairest in the same season.

Although injuries and personal reasons hampered his last two seasons at AFL level, nobody gave defenders nightmares like Cyril Rioli did.

From 2010 until Round 4 of the 2018 season, the mercurial small forward slotted an average of 1.5 goals per game - some of which had more than just Bruce McAvaney’s jaw on the floor.

Throughout the bounds of our criteria, Rioli collected a trifecta of All-Australians, a trio of flags and the 2015 Norm Smith medal.

With the Hawks currently devoid of an out-and-out match winner inside 50, you can be sure that Alastair Clarkson would love to have a clone of his four-time premiership winning goal sneak back at Waverley.

Despite a knee injury and a battle with testicular cancer, Robbie Gray has proven that absolutely nothing, or nobody, can stop him.

Since debuting in 2007, the Oakleigh Charger’s product has amassed 245-games for the Alberton based club and has split the sticks at an average of 1.4 times per game.

Since 2010, real estate on the 33-year-old’s mantel has become scarce, with Gray collecting five Showdown medals, four All-Australian blazers, three John Cahill medals, a pair of club goalkicking titles and the AFLCA’s Champion Player of the Year award in 2014.

With the Power continuing to surge in 2021, Gray could feasibly add both a premiership medallion and Norm Smith before the curtain comes down on his cracking career.

Despite being selected ahead of Franklin in the 2004 Draft, Jarryd Roughead often played the role of Robin to ‘Buddy’s’ Batman throughout their years at Hawthorn.

Although the former number 2 pick became a superb player of the Hawks’ second fiddle, his standalone numbers deserve serious respect.

From 2010 until his eventual retirement in 2019, Roughead averaged a more than reputable 1.9 goals per game in brown and gold, whilst also proving able to reel in four grabs per week as well.

Across the bounds of our criteria, the current St. Kilda assistant coach snared three club goalkicking awards, a trio of flags, a pair of All-Australian jackets and the 2013 Coleman medal.

After fighting back from his battles with melanoma, the lovable Leongatha lad went on to captain the Hawks in his final three seasons at AFL level.

In a list comprised of a blokes beyond the age of 30, Jeremy Cameron is quite easily the youngest forward within our decuple for the decade.

After claiming the AFLPA Best First Year Player award in 2012 and the AFLCA Best Young Player of the Year gong 12-months later, the Dartmoor deadeye has since developed into one of the game’s best contemporary goalkickers.

Having spent the entirety of last decade clad in orange - before trading them for hoops at the end of 2020 – Cameron’s average of just under 2.5 goals per game saw him claim nine club goalkicking titles, a pair of All-Australian nods, the 2013 Kevin Sheedy medal and the Coleman medal in 2019.

Like Gray, if Cameron’s – and the Cats’ – form continues, another pair of medallions could find their way into his trophy case before it’s time to buy a new calendar.

You all knew he was going to be here. You just didn’t know where he would land.

Although Carlton and Crows fans may believe a position half way down this list is unreasonable, Eddie Betts has slotted behind some fairly handy finishers.

Despite this, unless you are new to the game, you are aware that nobody in the current game can split the sticks more miraculously than the 34-year-old.

Since 2010, the Port Lincoln livewire has amassed both a mean of more than two goals per game, as well as four Goal of the Year awards, six club goalkicking award and three All-Australian blazers.

Even though Betts’ career has entered it’s winter, the fan favourite has still proven adept at getting crowds springing from their seats.

Although the son of a gun had a slow start to his career, Tom Hawkins well and truly put the foot down after his 3.3 effort in the 2011 Grand Final.

Since claiming his second premiership medallion, the classy Cat has claimed every club goalkicking title between 2012 and 2020, having averaged 2.5 goals per game across this nine-season period.

With his 49-goal effort last season, Hawkins received his first ever Coleman medal to add to his pair of flags, his three All-Australian jackets and his Carji Greeves medal in 2012.

Like his new partner in crime, Jeremy Cameron, if the offensively potent felines continue their upward trend this season, then a place for a third premiership medallion may need to be located.

As another name that Carlton let go and another name adept at racking up goals, Josh Kennedy was never going to miss this list.

With a total of 613 goals and just 336 behinds since the start of 2010, it is clear that the 33-year-old is unlikely to miss when facing goal either.

Having averaged more than 2.7 goals per game across the past decade, it makes sense both mathematically and logically that the bearded Eagle has claimed a pair of back-to-back Coleman medals in 2015 and 2016.

In addition to these titles, Kennedy has also nabbed a trifecta of AA nods, a premiership medallion in 2018, seven club goalkicking awards, as well as the title of West Coast’s greatest ever goal scorer.

Although the jury is still out on who is the greatest ever Riewoldt, Jack has well and truly edged his cousin in this catalogue.

Despite the fact that the 32-year-old played second string to Matthew Richardson in his first three seasons at Tigerland, the strawberry blonde spearhead well and truly stepped up the plate after ‘Richo’s’ retirement.

Since the dawn of the PM – post Richardson- era, the Tasmanian has gone on to collect three flags, a trio of Colemans, a trifecta of All-Australian blazers, a pair of Jack Dyer medals, as well as a mightily impressive 10 leading goalkicker awards – which included nine in a row from 2010 until 2018.

Although the Tigers premiership chances appear wobbly at the completion of Round 8, a fourth flag in five years for ‘Jumping Jack’ could still be written in the stars.

If ‘Buddy’s’ place at the top of this list is surprising to you, then you must have been asleep for the vast majority of the past ten years.

Ahead of joining the Hawks ahead of the 2005 season, Franklin’s ability was hyped beyond compare, but now 17 seasons down the track, the superstar has well and truly exceeded these expectations.

Across the seasons that make up the bounds of our criteria, Franklin has amassed a massive mean of 3.2 goals per game in both brown and gold, as well as red and white feathers.

With these unassailable numbers in mind, it makes sense that the Western Australian’s mantel and wardrobe have been stacked with eight club leading goalkicker awards, seven All-Australian jackets, three Colemans, a pair of Goal of the Year awards and a premiership medallion since the beginning of the 2010 season.

At 34, the stagehand is beginning to draw the curtains on Franklin’s luminous career, but with 45-goals left to tick off to reach the 1,000-goal mark, fans of every creed will be hoping that the at times imperious spearhead has one more trip around the sun left in him.