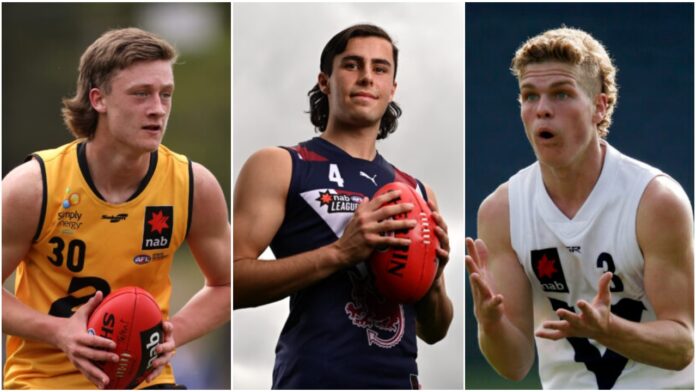 The opening night of the 2021 National Draft is upon us, with clubs finalising the foundations of their draft planning in hope of returning home with a satisfied hand of recruits.

With the first round always a make-or-break bracket for clubs, this year's unpredictable top order is sure to see several sliders and high risers officially call the AFL home and impact the league for the years to come.

While there are some certainties among the opening few selections, several early scenarios could see the night's planning shift, along with the queue of picks.

Despite the many variables and outcomes possible, we've looked to predict the outcome of the first round of the National Draft for 2021.

Perhaps the only certainty for the opening night of the National Draft, South Australian star Jason Horne-Francis will make the venture to Arden Street as the first overall selection for 2021.

The Kangaroos will acquire a ready-made prospect in the Panthers jet, who is sure to offer plenty of power and explosiveness to David Noble's midfield.

With an unparalleled ability to win his own ball and move forward to impact the score, Horne-Francis will slot straight into an already promising engine room ensemble in the blue and white.

The recent shock acquisition of Hugh Greenwood is sure to give North Melbourne a direct midfield-forward rotation between the now-former Sun and their prized draft selection.

The first matched bid of the night will fall at Pick 2, with the Giants forcing the Bulldogs to hand in a majority of their draft hand to acquire highly-touted tall forward Sam Darcy.

Having managed to accrue enough draft points - with live trading also likely to be a factor of the Bulldogs' planning - the Dogs will welcome their newest top pick with open arms early into the proceedings.

Following on from their bid on Darcy, the Giants will quickly turn their attention to Vic Metro midfielder Finn Callaghan in moving back to third overall.

Having gained plenty of comparisons to Bulldog Marcus Bontempelli, the left-footed Sandringham maestro is sure to offer plenty of poise and precision when he links up with a star-studded squad in the Harbour City.

Callaghan has also proven to be a threat from the defensive third and in attack, areas he may be required within as he bides his time before blossoming into a future star.

Perhaps seen as a top-three selection, whispers ahead of the draft suggest Nick Daicos could fall to Pick 4 if/when the Giants are off the clock, with the Suns the next club to bid for a promising father-son selection.

In what will be a great benefit for the Magpies' draft planning, the later selection will still see Daicos call Collingwood home while the club's handful of picks will brace for less damage as far as their tally of draft points.

Seen as arguably the best player in his draft, this outcome may just be the bargain that gets the Magpies back on track as they eye an eventual return to premiership contention.

After originally holding Pick 3, the Suns will finally land their first selection a further two places back in the queue, swooping on Vic Country tall Mac Andrew with their sole selection.

After an impressive 2021 campaign with Dandenong, Andrew has bolted into the top echelon of the draft rankings and would slot into the Suns' system nicely given their demand for key-position talent.

While being able to play all three lines, Andrew flourishes will be able to sharpen the teeth of Stuart Dew's attack while also being able to aid their ruck battles in the centre of the ground.

The Crows will add a mercurial edge to their attack early into this year's draft with the selection of Josh Rachele.

Seen as the premium small forward option in his class, Rachele will add another string to Adelaide's growing forward bow in joining the likes of Riley Thilthorpe, Shane McAdam and Darcy Fogarty.

Rachele could have an immediate impact at West Lakes and may turn his traits towards a role closer to midfield further down the track.

The Hawks' illustrious midfield will be bolstered by the selection of Josh Ward, a prospect equally capable of damaging the opposition on the inside and outside of the contest.

An impressive young leader with impeccable aerobic capabilities, Ward may emerge as a focal point in the Hawks' future planning under new senior coach Sam Mitchell.

With the likes of Tom Mitchell, Jaeger O'Meara and James Worpel currently calling the Waverley nest home, Ward will have plenty of star power to develop under.

The Dockers' first of two early selections will be in the form of East Perth spearhead Jye Amiss, who firms as one of the best key forwards in his class.

With the Tigers' breathing down the neck of Fremantle's first selection, the Western Australian club may look to pull the trigger on Amiss in order to secure his services ahead of Richmond's interest.

With a cavernous void in Fremantle's forward 50 needing to be filled, Amiss may just be the answer for Justin Longmuir's premiership formula.

The Tigers hold their first top 10 selection since the 2012 National Draft, where they selected Nick Valstuin at Pick 9.

In what Damien Hardwick hopes to be another premiership defender, Rebels key-backman Josh Gibcus will make the move to Punt Road with the same selection as when Vlastuin first pulled on the yellow and black.

With the recent departures of David Astbury and Bachar Houli opening holes in Richmond's defence, Gibcus will be a suitable selection for the Tigers.

The Dockers will continue their trend of selecting local talent in this year's draft, with Subiaco's Neil Erasmus joining the aforementioned Amiss in heading to Cockburn.

An athletic prospect that is sure to add flare to Fremantle's future, Erasmus is capable of playing between midfield and attack, offering as a quick fix for a number of the Dockers' list needs.

With plenty of upside to his game, the Western Australian could quickly become a catalyst in the Dockers' system.

With a need for cleaner ball use a clear requirement at Moorabbin, Wanganeen-Milera stands as a plug to fix that exact hole.

A dazzling outside midfielder capable of slicing through defences with his ball use and agility, the South Australian prospect could slot into a wider role in Brett Ratten's system and could be a vital connection between the Saints' defence and attack.

With St Kilda hoping to return to the September action, their credentials would be boosted by the selection of one of SA"s finest talents.

Like their cross-town rivals Fremantle, the Eagles will look local with their first selection of the night in Matt Johnson.

Likened to Magpies captain Scott Pendlebury, the formidable onballer has the ability to weave his way through traffic and offer exceptional delivery to his teammates under pressure.

Given the Eagles' midfield demographic, Johnson would reduce the club's average age of onballers as their premiership window fades.

The South Australian star prospect is seen as a marvel forward given his ability to play both tall and small.

Also capable of moving into midfield if required, Draper has flexed his worth as a ball-winning threat both in the air and at ground level.

With the Bombers identifying their attack as a weakness in their premiership bid this year, Draper would add further versatility to a forward line that already boasts the likes of Jake Stringer, Peter Wright and Anthony McDonald-Tipungwuti.

A large slider in our predicted first-round outcome, Hobbs is seen as arguably the best inside midfielder in class.

Having mirrored his game off Power star Travis Boak throughout his junior career, a move to Alberton may just see the baton handed in the coming years as the Vic Country star offers plenty of grunt and force in the engine room.

Hailing from Horsham, a short trip across the VIC-SA border is sure to rule out any possible 'go home factor' should Hobbs be on the board when the Power are on the clock.

When looking for pace and run from defence, the Giants won't look any further than Sandringham's Josh Sinn.

The Vic Metro ace was originally touted as a top-three prospect in this year's count before injury hampered his stocks in 2021.

After sliding back in the power rankings, the Giants may just reap the rewards in bolstering their backline with the acquisition of Sinn.

With key-position talent sure to be on their mind, the Lions may look toward arguably the best swingman in this year's crop, with van Rooyen proving his value at either end of the ground.

The Claremont tall boasts the ability to lock down opposition key forwards before moving forward to stand as a threat in attack given his elite ability in the air.

As Brisbane look to strengthen their bid for the premiership, a versatile weapon in the form of van Rooyen may just be the slingshot they need.

A goal-threatening midfielder, Sonsie holds great flexibility to be both agile and hard at the contest through midfield and into attack with intelligent ball use.

An impressive stint with Box Hill in the VFL saw the Eastern Ranges jet capable of matching it with ready-made talent and he could be the next cog to aid the Tigers' midfield group for the future.

A hindered campaign due to injury has seen Sonsie's name slide, but a fit track record at Punt Road could have the teenager seen as a bargain in the long run.

Following the departures of George Hewett and Jordan Dawson, the Swans may look toward a defensive-minded midfielder to fix their wounds.

An athletic onballer with one of the best aerial abilities, Goater has proven his capabilities of being a defensive threat when called upon.

The Cannons prospect initially developed as a centre-half forward before moving further up the ground, adding to his versatile ability across all three lines.

There's little to stand out when identifying the Demons' weaknesses, so versatility might be the avenue Melbourne recruiters look to take.

Knevitt has quickly emerged as a powerful, athletic tall midfielder following his impressive showing at the Draft Combine, where he amassed strong results in the 20m sprint and 2km time trial.

A more athletic edge might just take the Demons' star-studded midfield group further in the future.

Finishing off the first night of the National Draft with their second selection, the Lions will look to further strengthen their rearguard with the selection of Wilmot.

A hard-nosed, no-nonsense defender that can lock down his direct opponent before igniting an attack from the back 50, Wilmot would gain great tutelage from the likes of Daniel Rich and Brandon Starcevich in his time at the Lions' den.

With Wilmot's name in the sights of many, the Lions may look to quickly swoop on the Knights star before the next round.