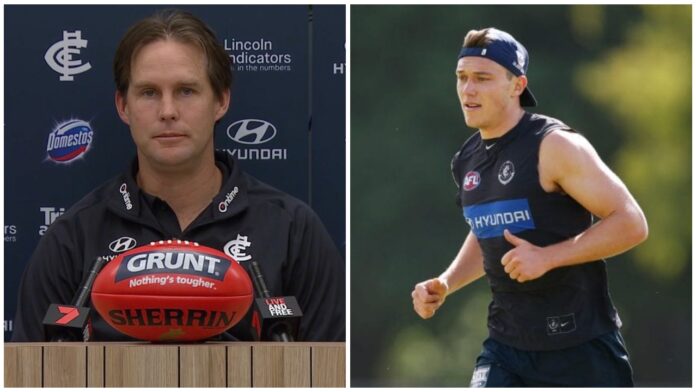 Last week it was reported by The Age that Cripps had been battling through a broken back and taking pain-killing injections to get through games.

Teague dismissed those comments in his weekly press-conference, saying that there was no issue.

"He's fine, he's doing all of the training. He'll complete everything in training today. He doesn't have a fractured back. Not at all," the Blues coach said.

However, Damian Barrett reported yesterday that Carlton's own media team had contacted Channel Nine's Sunday Footy Show to confirm the injury reports were true only days after their coach had said the skipper was fine.

Cripps has been out of form in 2021, with the co-captain struggling emulate his sensational form of earlier seasons as he deals with clear injuries and niggles.

Teague admitted after Carlton's Round 2 loss to Collingwood that the skipper had been sore in the lead up.

But Cripps came out the next week and dominated the Dockers, racking up 34 disposals and booting two goals. However, his form has since dropped off other than a brave last quarter display against the Bombers.

Teague spoke after Carlton's loss to Melbourne on Sunday night, confirming that he regretted how he handled Thursday's questioning.

"It was probably one of my worst press conferences," he said.

"I thought the injury was in the past. It hampered him in rounds two and three, so when it got brought up I was probably a bit frustrated and I probably wasn't as honest and direct as I could've been.

"At the end of the day, the message I wanted to get across was that he's fine now. I could've been clearer with the messaging around that, but for me, the fans need to know that he's right and he's out there.

Teague said frustration had built up because he believes the injury was in the past.

"I knew the full extent (of the injury), but I thought it was in the past. At the start of the year, I probably didn't share it a lot because you want to protect your player.

"This one, the frustration probably came from (the fact that) it was in the past and we were dragging up old news because he didn't have his best day."

Cripps was solid against Melbourne on Sunday, collecting 27 disposals in the 26-point loss. His contract expires at the end of this season and every game is crucial in deciding his value going forward.

The star midfielder is expected to remain at Carlton but his contract details remain unclear as form and injury issues have hampered his year so far.

Injuries have been a major blow for Carlton this year, with Jack Martin, Zac Fisher, Mitch McGovern, David Cunningham and Caleb Marchbank all suffering long-term injuries this year.

The Blues are now 3-6 and facing an up-hill battle to play finals in 2021 ahead of Saturday's clash against Hawthorn at the MCG.