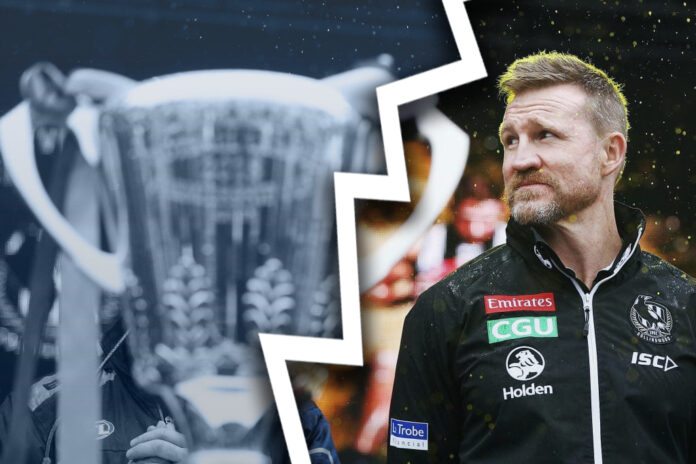 After their worst start to a season since 2005, Collingwood has faced intense scrutiny.

The Magpies currently sit 17th on the ladder, winning just one of their first seven outings for 2021, including five losses in a row.

Pressure is mounting on the club as a result of their poor form, and in particular towards out-of-contract senior coach Nathan Buckley.

“I’m not in favour of it (Collingwood trading Jordan De Goey) and I’ll tell you why,” Rendell told SEN’s Dwayne’s World.

“They have got a mountain of issues at Collingwood, but if you look at their best 22, I know you don’t often get the best 22, I think next year it’s still capable of winning the flag."

However, he stood firm on his comments from last week that the club needs to move on from Buckley.

Rendell argued that their middle aged players, like De Goey, Brodie Grundy, Brayden Maynard and Darcy Moore are all vital after their off-season departures.

De Goey has been a heavily-criticised figure at Collingwood in 2021 after re-signing on a two-year $1.5 million deal in the off-season, but struggling to live up to his price tag.

But Rendell believes that the Magpies forward could be back to his best under the tutelage of another coach.

“Right here right now if you traded Jordan De Goey, the bottom six teams aren’t going to trade for him because they’re not in the window to win a premiership and if you’re going to take De Goey you have to be in the window," he said.

“I’m convinced that with a change of guard, and that has to come, I’m sure that with a new coach he can get back to something like his best.

“De Goey, like everyone else in the team, looks completely lost."

The next group to be dissected was the club's youth - a bracket where the Magpies are now well stocked, but many yet to prove themselves at senior level.

Rendell was excited by the youth at the Holden Centre, but admits a majority are a few years off having a real impact.

He declared that players with more experience would have to model consistency to allow the kids "to have ups and downs".

Stick or Twist? The AFL clubs that should consider captaincy changes...